after my recent pizza-assembling adventures, i have felt inspired to continue my pursuits in appeasing my ever-present italian cravings. enter pinterest and the gals from the amazing diy blog, a beautiful mess. having seen this recipe floating around the blogosphere, and given my intense love for all things spaghetti squash, i was excited to translate it from the computer screen into my kitchen, and ultimately, into my belly. while the end result wasn’t exactly a domino’s doppelganger, it was absolutely delicious (and still figure-friendly) and for those reasons, i’ll count this particular pizza-adventure a success.

directions:
i cook my spaghetti squash similarly to how i cook a potato. i stab the outside with a fork eight million times and throw it in the microwave. if you have an aversion to microwaves, you can certainly roast it in the oven instead (cut the squash in half, scoop out the seeds, and place it in the oven at 375* for 40-45 minutes). but if you’re a-okay with the faster method, cook squash on high for 12 minutes rotating it every three minutes. be careful removing it from the microwave because it’ll be hot, hot, HOT! i usually palm it with an oven mit. after it has cooled down to a reasonable level, get ready for a steam facial, because once you cut into the now tender skin, a puff of hot air will be released. wipe the dew drops off of your forehead and nose and grab a fork to begin scooping out the seeds. after you’ve discarded the unwanted parts, begin raking the remaining inards to produce a spaghetti-like pulp. place contents onto a hard service and soak up any excess moisture with paper towels. in a separate small bowl, mix together the egg, oregano, and salt. add in squash. finally, transfer the squash mixture onto a baking sheet covered in aluminum foil (it’ll make clean-up a cinch later). spread out evenly to create a thin layer. cook “dough” for 25 minutes at 400*. the outside edges should be brown and crispy. 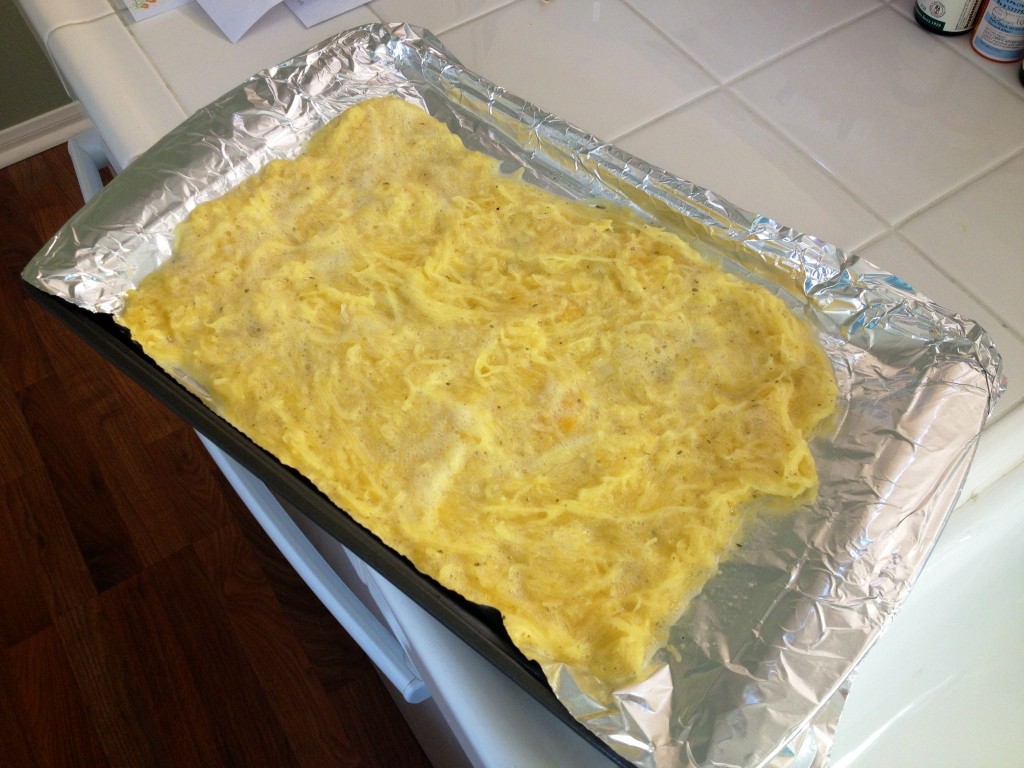 now for the toppings! spread a thin layer of marinara sauce over the squash and follow-up with a healthy sprinkle of cheese and whatever else your heart desires. i used fresh tomatoes, a sprinkle of the bacon-bits left over from my shredded brussels sprouts and kale salad, as well as a some left over shredded brussels, too.

prepped and ready for the oven.

place the pizza back in the oven until the cheese is nice and melty -for approximately 10 minutes. allow the pizza to cool before dishing it up. i didn’t wait quite long enough and my portion ended up looking more like a helping of lasagna than a slice of pie. like i’ve mentioned before, patience isn’t my forte. especially when it comes to waiting to eat. but regardless of what it looked like, the aesthetics had nothing to do with how it tasted. my pizza creation was absolutely delicious. clearly, the spaghetti squash crust isn’t even comparable to the regular glutenous doughy variety, but if you’re looking to satisfy a pizza craving and get a healthy dose of vegetables, i would highly recommend you pinning this recipe to your “cook this” pinterest board. and then, you know, actually making the pin a reality.