in addition to shawn(a)palooza, this past weekend was also partly spent visiting the H family in the city by the bay. and after getting a full report of san diego’s unseasonably windy, rainy, overall monsoonal weather over the past 72 hours, i apparently picked the perfect weekend for a northern california getaway.

i paid charles lindbergh a visit around 3:30 p.m., yet due to the inevitable airline delays, i didn’t end up boarding my southwest flight until closer to 6:40 p.m. luckily i was armed with a healthy stack of studio barre choreography notecards and a copy of this is where i leave you on my nook to pass the time. 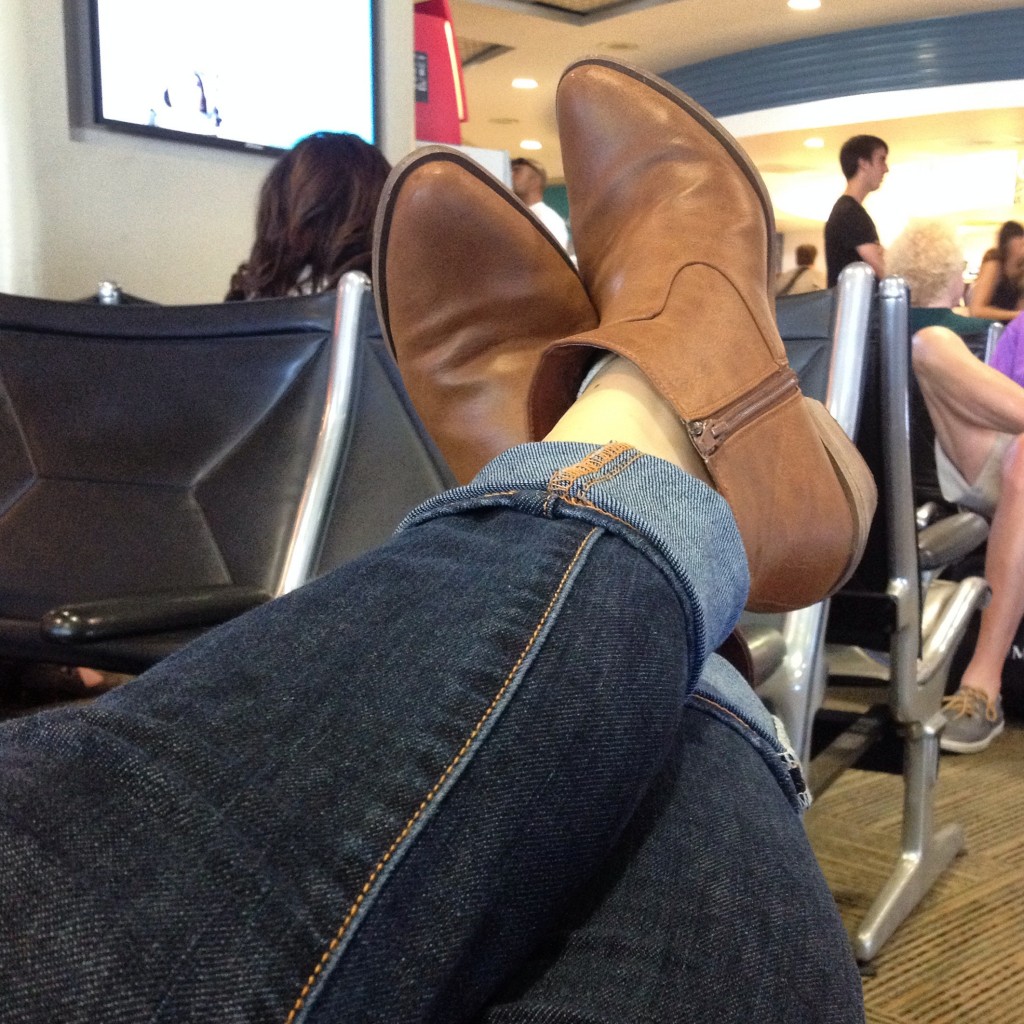 heels up, wheels up.

thankfully, air travel kind of feels like teleportation because before i knew it, we were taxiing around san francisco international and deboarding the plane soon thereafter. unlike the balmy temperatures southern california had been enduring lately, the weather in the bay was crisp, fall-like almost. i mean, mark twain didn’t say “the coldest winter i ever spent was a summer in san francisco” for nothing, y’all. personally, the cooler temperatures were a welcomed change. it gave me a chance to wear my new madewell sweater, so naturally, a win. M & M pulled up in front of the southwest arrival gate a hair past 7:45 p.m. and just like that we were off to begin our weekend.

having moved since my last visit to san fran, i was excited to scope out their new abode in the potrero hill neighborhood. on the outskirts of the city, potrero boasts quieter streets (albethey hillier streets), beautiful and unique 19th century town homes and of course, delicious restaurants and cafes. while i certainly loved their previous high rise apartment in the soma district, with convenient strolls to AT&T park and the ferry landing building, their new place of residence had me completely smitten. i playfully asked if i could move in permanently. i wasn’t joking.

after setting down my suitcase in the guest room, M & M’s french bulldog, mayzie greeted me with a big ol’ smooch (i’ve missed you, too mayze). i cleared the excess drool from my face before we walked down the street for some friday night sushi at one of their favorite local haunts –umi. as is the case with most meals in san francisco, a city acclaimed for both the variety and quality of their cuisine, our feast of raw fish was nothing short of delicious. we finished off our evening with coconut ice cream sundaes and laughing our faces off at the antics of leslie mann’s character in the other woman (which i highly recommend, bee-tee-dub). 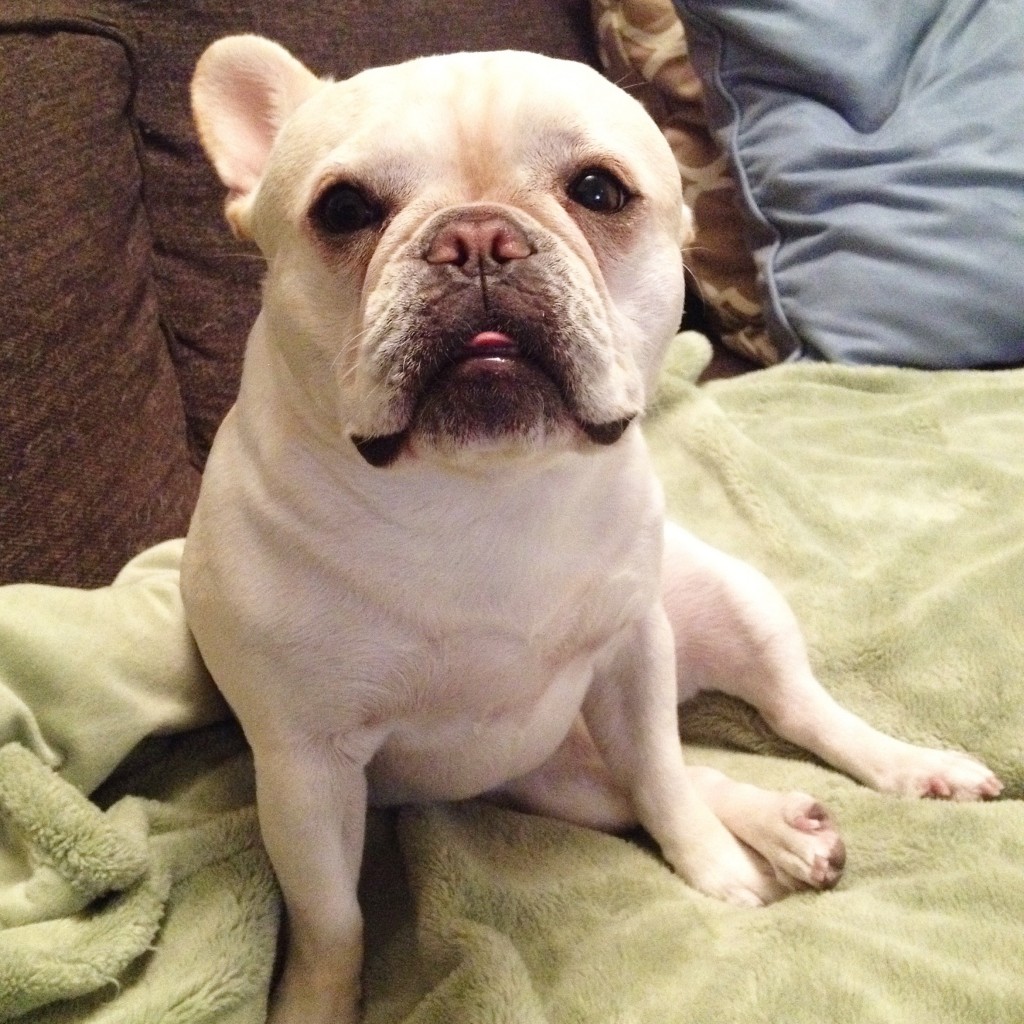 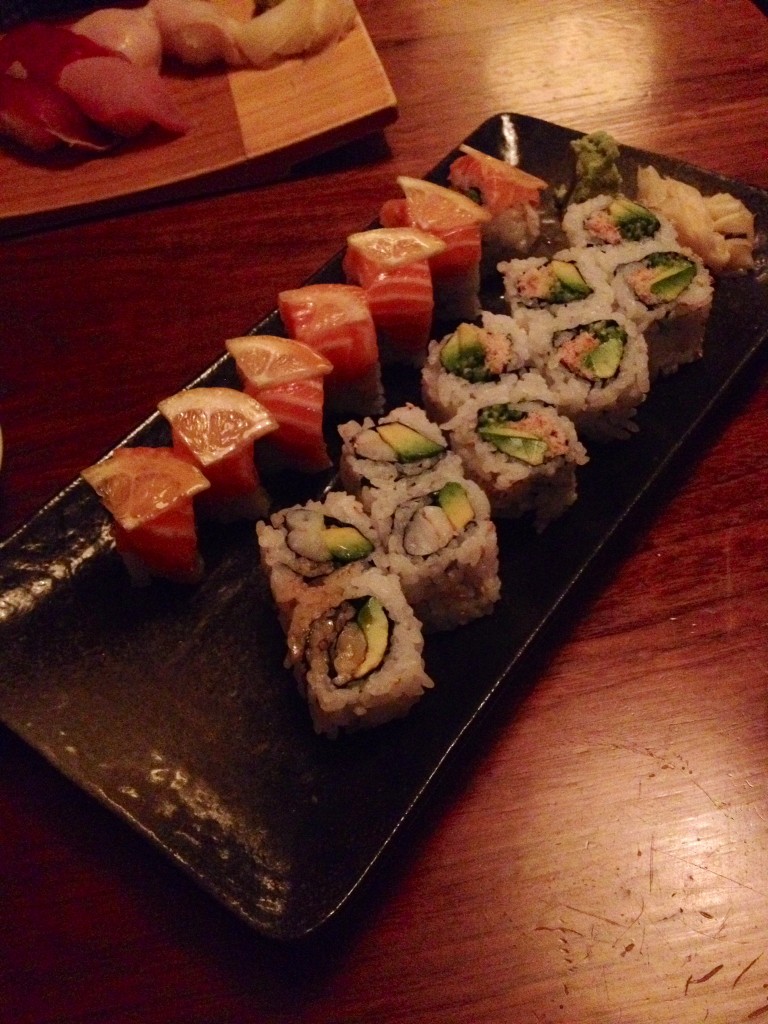 get in my belly.

with plans of heading out to livermore to shop the outlet stores (and by “outlet stores” i mean j.crew factory and j.crew factory only), we rose early on saturday morning to make it to our destination before all of our fellow shoppers, most of which we concluded would be doing a bulk of their “back to school” shopping (yikes). after an obligatory philz coffee run (the best!), M & M and i loaded up the car and headed out east.

in a fabulous twist of fate, our college friend/sorority sister and her husband drove up to meet us at the outlets for a little shopping of their own. i love when shopping brings people together. as expected, the bulk of our damage was done at j.crew factory, though my contributions to the economy were significantly less than i had anticipated. you’re welcome, bank account. despite modeling upwards of three handfuls of apparel, i only ended up taking home a pair of hunter green skinnies, a navy v-neck sweater, and a plaid button-down for S (because i’m a great girlfriend). after logging about two plus hours of shopping, we parted ways with A and her husband before passing through pleasanton for lunch. greek food, ftw. 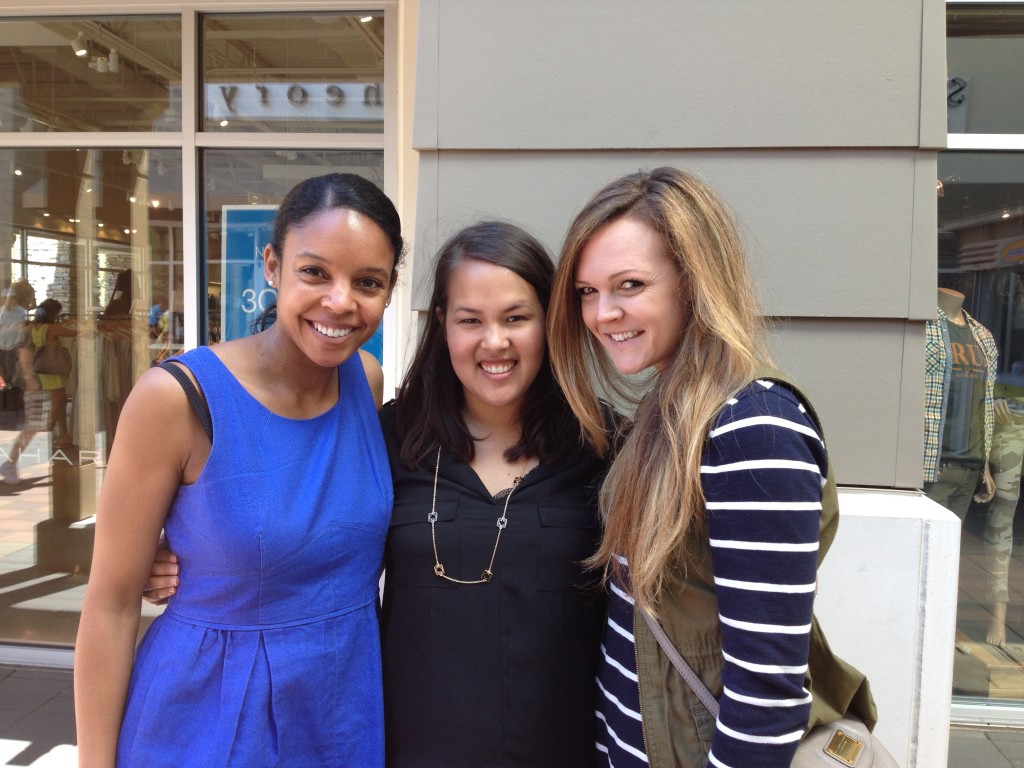 over a decade’s worth of friendship.

we arrived back in the city in the late afternoon. M and i left the other M to rest and hang out with mayzie while we ventured downtown to the san francisco mall where we hoped our good shopping karma would continue. after successful visits to madewell and bare minerals, we returned home to freshen up for dinner before hitting the road again across the golden gate bridge en route to the quaint town of sausalito. 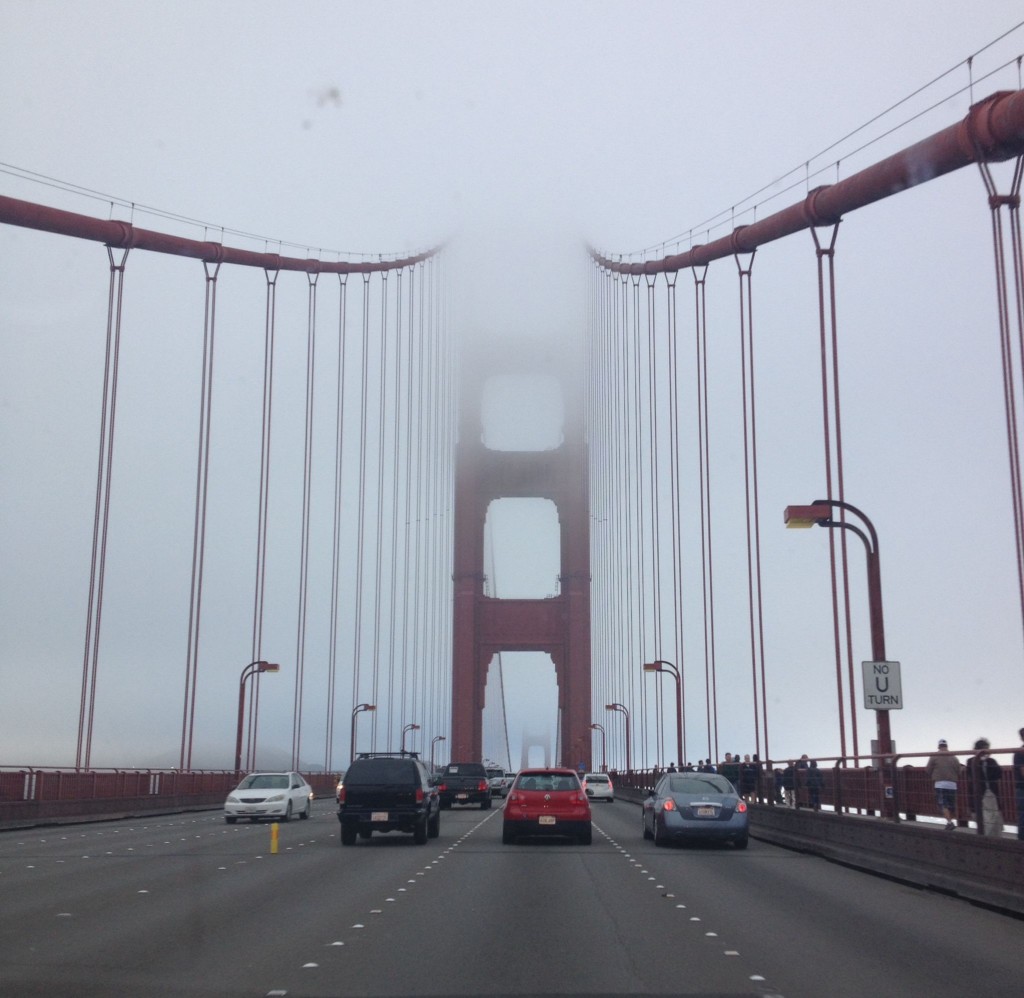 having loved my inaugural visit to avatar’s on one of my first trips to visit M & M, i was excited for my sophomoric experience with their indian-fusion cuisine. after wetting our appetites with a trio of gluten-free samosas, we moved onto our main courses. while M & M both selected from the menu, i threw caution to the wind and left it up to the chefs to compose a shawna-worthy meal. the parameters were simple (or not so simple, depending on how you look at it) –no gluten, no dairy, mild spice, chicken okay. challenge accepted. what appeared before me a handful of moments later was nothing short of a culinary masterpiece -a mountain of sauteed veggies and strips of tender chicken coated in indian spices lay gently upon a soft bed of yellow long-grain rice. when he presented the dish before me, our server (who is also the restaurant owner) had confidently claimed that i would be licking the plate clean by meal’s end. while i like to think i’m a lady and wouldn’t do such things in public, i will say that i came pretty darn close. it was that good.

after dinner we traveled back over the bridge into the city where we settled in for another evening of ice cream sundaes and a movie. this time a documentary called 112 weddings. having read about it on a cup of joe, i was intrigued by its concept (a wedding videographer goes back to interview nine of his favorite couples to see how they have fared in the “happily ever after”). but it kind of made us all a little bit sad, so we had to watch the food network immediately afterward to bring us back into better moods.

speaking of better moods, i woke up sunday like a giddy schoolgirl. because it was the morning M & M had promised to take me to plow, a neighborhood cafe known for their delicious brunch menu. our friend and fellow pepperdine alum, A, also joined us as we were sat at a table for four following an impressive hour-long wait. M had raved about nearly everything on the menu, most notably the almond flour pancakes. so after much debate, i decided to go with the house made granola with yogurt, market fruit and potrero hill honey and a side of annie’s almond flour pancakes with house almond meal, butter, and pure maple syrup. because yolo, y’all. i don’t know who annie is, but i wanted to kiss her for creating such a light, fluffy, and melt-in-your-mouth confectionery creation. needless to say, plow lived up to the hype. 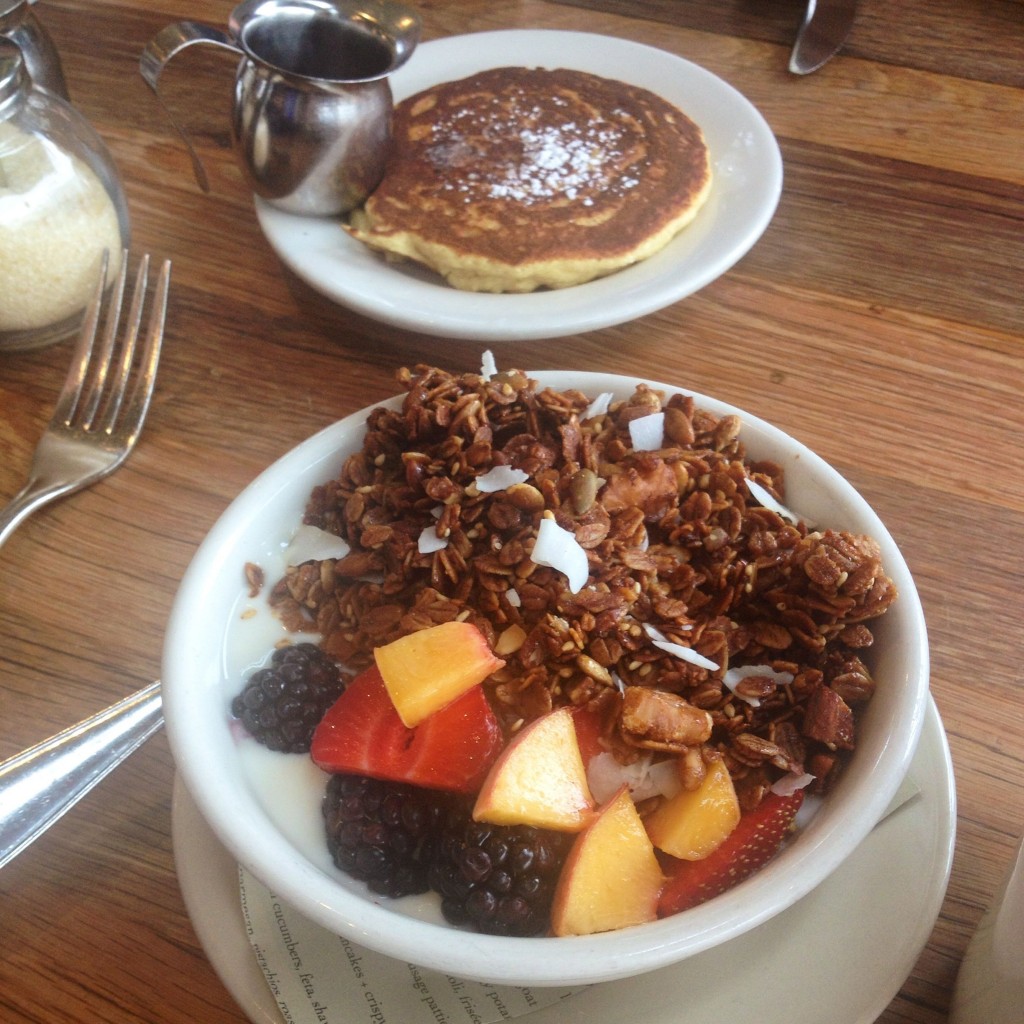 after saying goodbye to A, worked off the pancakes with the short, yet steep, walk back to M & M’s home. with my flight not until mid-afternoon, M and i decided to visit a few boutiques in noe valley, a neighborhood known for its specialty shops and young families. as we strolled the quaint streets, i received a phone call informing me that my upcoming flight was working on a nearly two-hour delay. so i quickly sprang into action to inquire if i could indeed sneak onto an earlier flight home. thanks to sarah, my kind and most helpful southwest representative, i was booked for the 1:35 p.m. flight that was currently scheduled to depart at 2:40 p.m. apparently southern california’s case of inclement weather had created a domino effect of delays all day, womp womp. so in order to make it to the airport on time for my earlier departure, M & i had to cut our shopping excursion short.

the entire H family (mayzie, too!) accompanied me to the airport. we exchanged “thank yous” and “it was so good to see yous” and “we miss you alreadys” as the car idled in front of san francisco international. i collected my things and headed inside to print my new boarding pass and weave my way through the security line. despite the frenetic energy that inevitably filled the bustling airport, i made it to my gate in record time, giving me ample opportunity to rejoin the foxman family and all of their antics in jonathan tropper’s novel. i will finish this thing by september 19th, i thought to myself.

the flight back to america’s finest was relatively painless, the sting lessened still by the fact that a date with S was waiting for me on the other side of my arrival home.

and just like that, it was back to business as usual. S and i capped off my travel weekend with take out sushi and guy’s grocery games. the end to what had been a perfect weekend away. in the bay.

i remember going on a tour of northern california colleges the summer in between my junior and senior year of high school. after romanticizing about san francisco most of my adolescent life, when my parents and i finally arrived to the hilly streets and fog-lined skylines of the city by the bay, despite my adoration for the city’s eclectic charm, i knew it wasn’t the right fit for me.

but just because i never saw myself living there long-term doesn’t take away from the fact that i still believe san francisco is something fairly magical. it’s perfect for a weekend getaway -when i need a change of pace, a reason to wear layers, or simply to indulge in some really delicious cuisine.

add to the fact that two (excuse me, three (sorry mayzie)) of my favorite people call the city home and are always gracious enough to have me camp out on their aerobed for a few days, and my affections for this northern california gem only strengthen.

so not to get all tony bennett on y’all, but like he so famously sang, and after this trip especially, i’m most certain that “i left my heart in san francisco.”

so take care of it for me, san fran. i’ll be back soon to reclaim it. 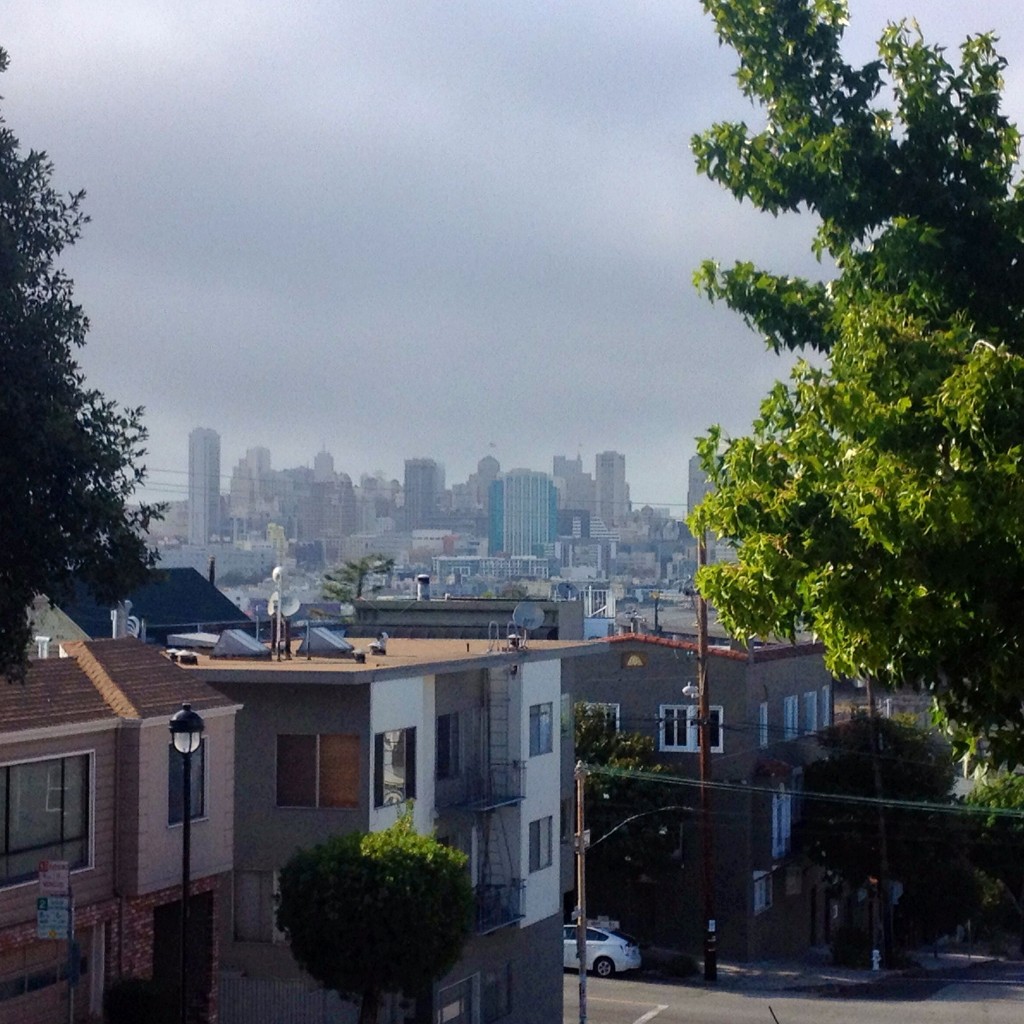 p.s. love you, H family. thank you so much again for such a wonderful weekend.