compromise: an agreement or a settlement of a dispute that is reached by each side making concessions.

and an integral part of any successful relationship.

he agrees to watch an episode of the bachelor if you sit through sunday night football; waits patiently in the dressing room at j.crew if you accompany him on his next trip to home depot. relationships are about give and take and sometimes you do things not necessarily because it brings you direct joy, but because it makes the person you love happy. or so i’ve learned.

but perhaps an even more enjoyable aspect of a relationship is the ability to discover a common ground, establishing a mutual interest where one isn’t necessarily sacrificing for the other. for S and i, finding shared interests hasn’t really been an issue. turns out we’re kind of the perfect match (no pun intended). but this weekend we discovered an activity that really has the potential of being “our” thing. and an activity, thank goodness, that could really help me work off all of the cookie dough he’s been making me.

having grown up with a tennis-loving family, the racket sport has always been an important part of my life -whether i was taking lessons, playing on my high school team, or more frequently -watching the professionals do their thing on tv (or in person!). so when S expressed an interest in dusting off his old wilson and joining me on the court, i was pretty excited over the possibility of channeling my inner sharapova again. lucky for us, my parents have a court in their neighborhood that hardly gets used, so we crossed our fingers that when we ventured over in our tennis apparel and backwards hats this past saturday, we’d have an open court for some friendly competition.

considering the fact that it was still over 80-degrees when we pulled up in the late afternoon, we might have been the only two people silly enough to brave the heat for a few dozen forehand rallies, but we were thankful nonetheless to have the venue at our disposal. we may have had to shake off the cobwebs and chased down a few (okay more than a few) over-the-fence lobs, but overall, we managed to sneak in a few double-digit rallies over the course of our hour-long session. i quickly discovered that S had been quite humble in his clear mastery of tennis fundamentals and that i’m no match for his wicked drop-shot and he, in turn, learned that my two-handed backhand (when properly executed) certainly lives up to the hype.

when all was said and done, and frustrations with net balls aside, we both agreed it had been an absolute blast. so much so that after a new racket for S (he was due for an upgrade) and a few more pieces added to his tennis wardrobe (god bless target), we went back for a second match on monday. turns out, all we needed was a little practice, because round two proved to have a few more winners, a few more rallies, and a lot less out-of-the-court lobs.

so we’ve decided we’ve found our “thing.” an activity we both enjoy and an activity where we can also see tangible growth. while i know we’ll never be wimbledon ready (or u.s. open, to be relevant), that’s not really what it’s about anyway. it’s about doing something that not only gets us outside and staying active (did i mention how those burned calories make room for cookie dough?), but most importantly, doing something that we can enjoy together. no strings attached. 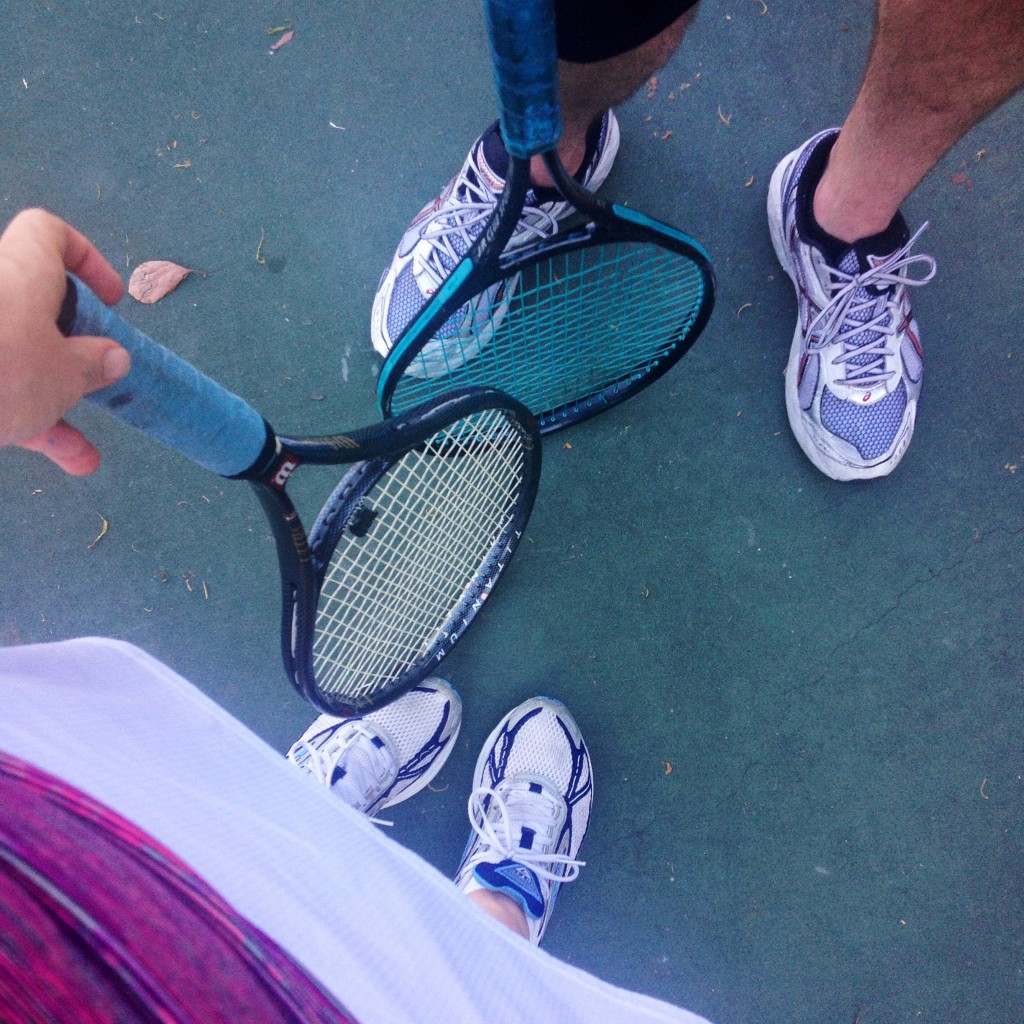