however you define one rotation around the sun, one thing’s for sure.

a lot can happen in a year.

i was reminded of this when i received an email on sunday from studio barre wishing me a happy anniversary: 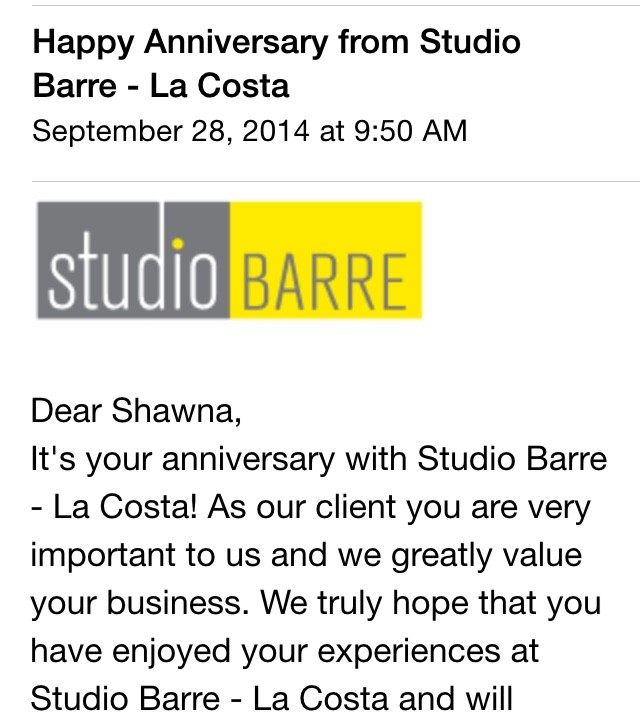 ironically enough, it was the day all of the instructors were gathering to learn the new quarter’s choreography. how appropriate, i thought. and also, what a difference a year makes.

i remember very vividly a conversation i had with a girlfriend once about how much had transpired in her life in a short period of time -she had entered into a new relationship, been accepted into a prestigious business school, and was about to embark on a cross-country move. “a lot can happen in a year,” she said. and it was true. her life had all but flipped upside down in a collection of weeks. and in what seemed to be the blink of an eye, she was in the middle of a whole new chapter of her life’s book.

most days, i’m not too concerned with comparing what my life looks like today to what it did 365 days ago. i suppose in the very least, i could probably look through my archived albums to see what i was wearing, but as far as what i was feeling or thinking or doing on october 1st, 2013, i probably couldn’t tell you (okay, so maybe this helps). but when we’re reminded of an anniversary or when we add another candle to our birthday cakes, i always feel like there’s a natural inclination to reflect on everything that has transpired between the two bookends of time.

in this case -september 28th, 2013. that morning i walked into studio barre la costa to take the 7:15 a.m. class. it was a saturday and i still had my doubts that this particular studio would become as welcomed as a home as my beloved pure barre solana beach had been for the past two and a half years. but i took class and definitely felt things burn and decided that it would be an adequate replacement given the circumstances.

it took me a while to make friends. maybe my propensity to take the front corner spot or my lack of an extensive lululemon wardrobe had stacked the cards against me, but i’ll admit, despite my self-proclaimed best attempts, i didn’t find that sense of camaraderie right away. in fact, it kind of took a case of mistaken identities to be the catalyst of the change (an instructor mistook me for M and M for me). but slowly, i began to forge friendships with my fellow tuckers. by february, we were saving each other mats and asking about weekend plans and just like that, we were facebook official.

fast forward exactly 365 days and in terms of my barre life, things look radically different. fast forward 365 days in terms of my non-barre life and things look radically different, too. in an amazing turn of events, i’ve gone from first-time client to 5:30 p.m. class-regular to centurion to instructor. all in a year’s time. and i couldn’t have done it without the Lord’s provision or without the support of my fellow instructors, clients, now barre besties (M & J!), family, friends, and of course, another aspect of my life that has changed in the course of the past year -my boyfriend, who not only helps me study choreography but who waits until 8 p.m. to have dinner with me on the nights when i teach the last classes of the day. albeit seemingly trivial, my studio barre anniversary has certainly become a tangible example of how quickly life can change.

sometimes the changes happen slowly, gaining momentum with each alteration. other times, in my case especially, the changes occur all at once as if someone got a hold of my google calendar and shook it like a snow globe. but however the changes come to fruition -fast or slow, what this year has taught me most is that ultimately change is good. and necessary for growth and refinement and faith. for someone who clings to routine, the past few months’ adjustment in schedule alone has been a growing experience in and of itself. but like all new things, they don’t feel foreign for too long. eventually your new routine is simply your routine. and your new new life chapter is simply another chapter you’re learning to embrace as you live each day immersed in it.