so the last time you left me, i was vacillating (highly underutilized word) between this madewell dress and this zara jumpsuit for the two weddings i’ll be attending before the end of the year. well after a visit to the forum yesterday, i am happy to report that i will not be going naked to either of the upcoming nuptials (i have a feeling that would have been frowned upon). madewell, ftw, y’all.

interestingly enough, however, the winner winner (chicken dinner) was not a dress i had previously considered. but i feel like that’s kind of how it always happens. at least that was the case when shopping for homecoming and prom. but if i’ve learned anything about dress shopping, especially special occasion dress shopping, it’s that you a) can’t judge a dress by its hanger appeal and b) when in doubt, try it on. sometimes, scratch that, most times the one that you were on the fence about ends up being the one you take home.

after a couple of laps around the store to assess its inventory, i settled upon about a half-dozen dresses in all shapes and colors to take with me into the dressing room. channeling my best heidi klum (except without those mile-long legs and chiseled cheekbones), i began to model (and subsequently rule out) each one. i felt a bit like goldilocks. this one was too drapey, this one, shapeless. come to think of it, most of the dresses i initially tried on gave me no shape whatsoever. i take that back, they gave me a shape -however “square” isn’t usually the shape i’m going for, call me crazy. anyway, just when i thought my usual luck at madewell was about to run out, my mom handed me the shiftpleat dress in colorblock (olive & black) and urged me to “at least try it on.” truth be told, the color palette and shape aren’t usually regular rotations in my repertoire, but since my picks weren’t scoring any points with the judges (the judges being me, my mom, and two of the madewell sales associates), i figured it couldn’t hurt to try.

i slipped it on and admired myself in the mirror. and by “admire” i mean i picked and pulled and fussed over the belt and whether or not the pleats made me look wide or if the high-cut shoulders made me look like a linebacker. to which my mom simply rolled her eyes and told me i was crazy. but once she talked some sense into me, i did my best to assess the reflection objectively; forging through my lingering body dismorphia in an attempt at seeing the dress for its innately flattering qualities. for one, the dress made me look like a woman. not a girl, like so many of the potato-sack dresses tend to do (ironically, those are the ones i tend to gravitate towards), but a lady. and maybe that scared me a little bit. but as my mom again so delicately reminded me (have i mentioned that she’s basically the best human ever?), i AM a lady. a lady that is not only almost 30, but in this case and perhaps most importantly -who has a shape she works darn hard to maintain. so maybe it was time to put away the oversized potato sack dresses and be okay with showing off my bod every now and again.

i slipped on a pair of black suede heels and in an instant, the whole look felt complete. very grown up but without without a hint of “mother of the bride.” i hemmed and hawed a few more times before finally deciding that i would probably not find a better candidate, given the time restraints, before the weddings. “okay, let’s do it.” i told my mom as i slipped out of it and placed it back onto its wooden hanger.

not to be hyperbolic, but i feel like my decision to go with this dress instead of one boasting a more “girlish” silhouette was kind of a little milestone. as if i’m finally ready to own the fact that i’m/my body isn’t 16 anymore. and for good reason. who knew a trip to madewell would bring such revelations?

oh and if i had had any lingering doubts on whether or not the shiftpleat dress was the one for me, when we got to the register, not only was it on promo that day (further reduced), but i was also able to apply a 20% off coupon i had saved from last spring -bringing the grand total to just over $100. not too bad for a dress that’ll cover me for not one but two special occasions this season, and hopefully many a festive function in the future.

finally, here’s how i plan to accessorize -once with leopard pumps, and once with a classic black pair. as far my locks are concerned, i think an LC-inspired low side pony (with lots of volume, obvi) would be flattering given the high neck-line, but let’s be honest, i might just go for the traditional big texas-hair look because why mess with a good thing? 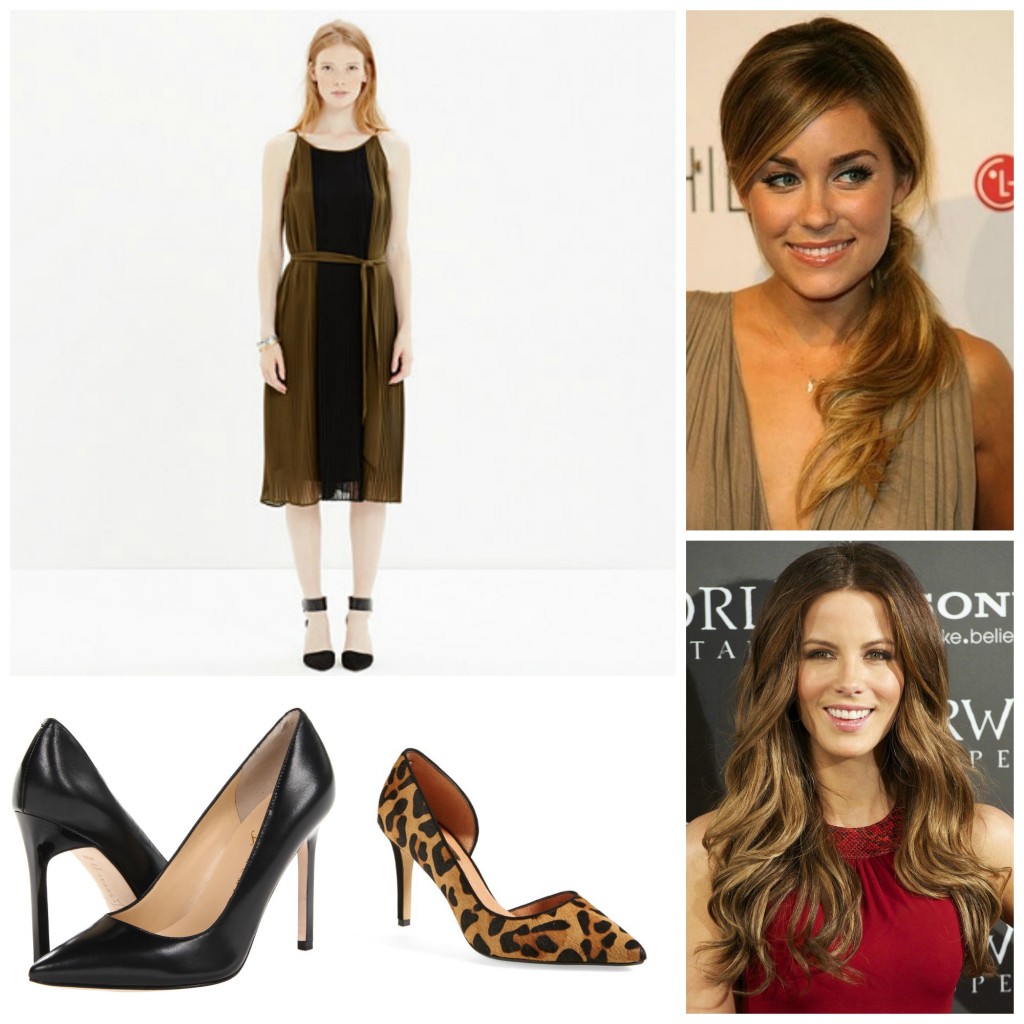