some weekends call for fancy dinners out on the town. others, for a little home-cooked goodness. or shall i say slow-cooked goodness. sure, the weather could have been cooler, or drearier, or resemble what most parts of the country know to be “autumn,” but it wasn’t 80-degrees and for that we were both thankful and more than ready to tackle our latest cool-weather craving -chili. and in this instance, it’s perfect accompaniment, cornbread.

after searching the interwebs for a viable chili recipe, S and i landed on a version that utilized ground turkey (instead of beef) and a crock-pot. thankfully the only thing we had to purchase was the turkey (and the remaining ingredients) because S already owns a crock-pot. one that appeared to be plenty big to accommodate all of the chili components, but one that we later discovered was just a hair too small for two cans of nearly everything. so if you’re using a cooker on the more petite side (less than 6 quarts), you might want to half the recipe. we had to leave out one jar of black beans and had a bit of a mount vesuvius situation for portions of the day (burbling tomato sauce looks eerily similar to lava, just sayin’). nothing that a little 409 spray and a old rag couldn’t amend, but just a forewarning.

and because chili just wouldn’t seem right without cornbread, S found another use for his cast iron skillet (have i mentioned he has a great supply of kitchen supplies?) and whipped up his favorite alton brown recipe for creamed corn cornbread. or as i like to call it, good-for-you cake.

directions:
heat the oil in a skillet over medium heat. place turkey in the skillet, and cook until brown. pour turkey into slow cooker. add the onion, peppers, tomato sauce, diced tomatoes, beans, jalapeños, corn, chili powder, and cumin. stir and season with salt and pepper.

cover and cook on high for 4 hours or low for 6 hours. serve with toppings, if desired.

directions:
preheat oven to 425 degrees. place a 10-inch cast iron skillet into the oven. in a bowl, combine the cornmeal, salt, sugar, baking powder, and baking soda. whisk together to combine well.

swirl the canola oil in the hot cast iron skillet. pour the batter into the skillet. bake until the cornbread is golden brown and springs back upon the touch, about 20 minutes.

i’m a bit of a gringa (white girl) when it comes to spice. alright, a lot of a gringa so the added chili powder and jalapenos had me sniffling through every bite. but then i had an epiphany -crumble the cornbread into the chili. not only did it add a bit of sweetness and texture, it was the perfect anecdote for my over-stimulated taste buds.

except who’s to say how much chili i really consumed this weekend. from the looks of it, you would have thought i just had a bowl full of cornbread.

(never a bad thing, in my humble opinion). 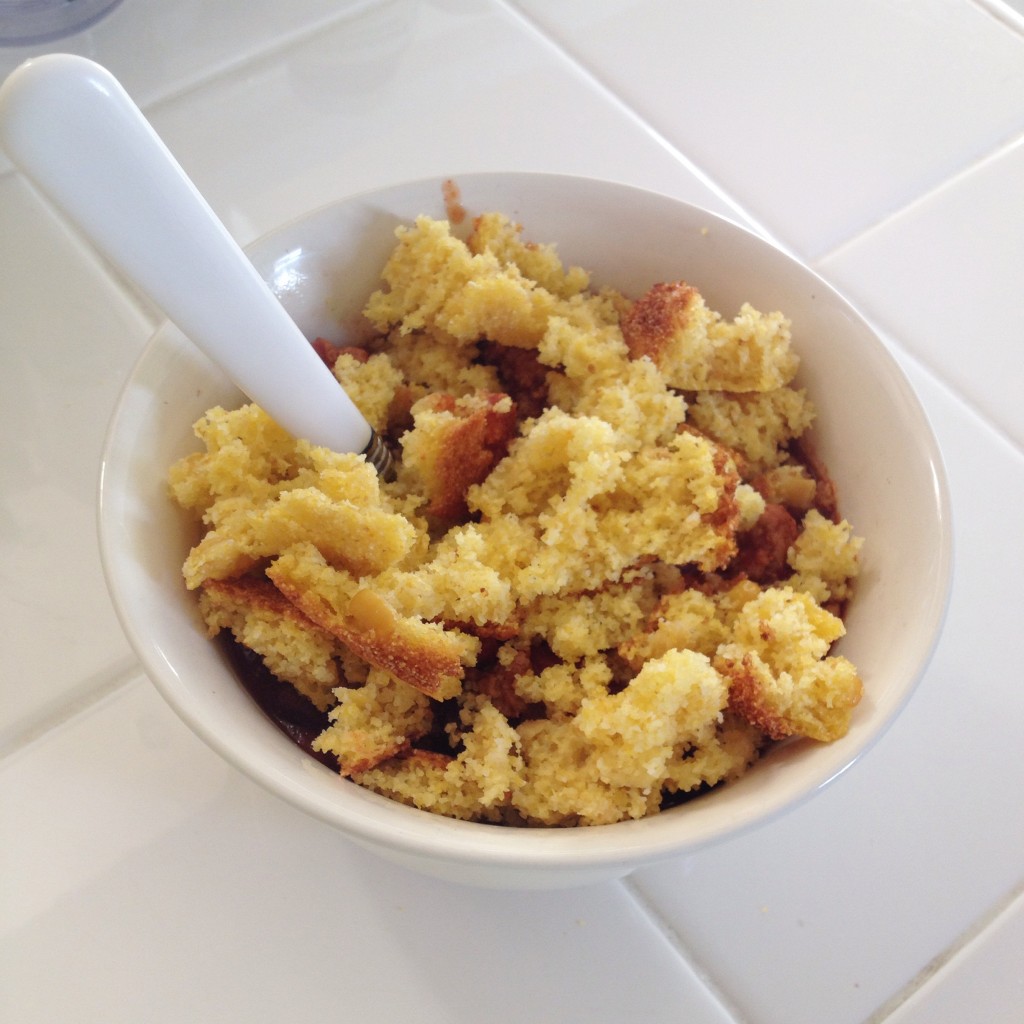