when i began telling people of S and my upcoming vacation plans to the pacific northwest, i oftentimes got an understandable response, “vancouver and seattle in january?!”

yes, we knew. winter (as it’s truly defined in every other part of the world outside of southern california) was not the most ideal time to visit either city, but it had sounded as good of a time as any when S and i booked the trip almost on a whim last september. besides, seattle could be just as rainy in july as it could be in january, right? i may or may not have purchased a bright green pair of wellies from target soon thereafter.

anyway, all travel accommodations were made through orbitz. they aren’t paying us to tell you this, but hey, orbitz, we are totally okay if you’d like to do that in the future. call me/us. anyway, booking through orbitz made things really easy, we were able to price comparison hotels and with the help of google maps, i was able to decipher which locations were most ideal, too. S and i divided and conquered. and before we knew it, we had tickets on alaska air, two solidified hotel accommodations (one in each city), as well as a reservation on the amtrak cascade train which would take us from vancouver into seattle.

and then we blinked and it was january 22nd and we were sleepily gathering our carry-on luggage and loading it into S’s truck en route to charles lindbergh for our #BCsea2015 adventures to commence.

we arrived at the airport with plenty of time to spare. as with any good start to a vacation, ours began with a shoe selfie. a shelfie if you will. 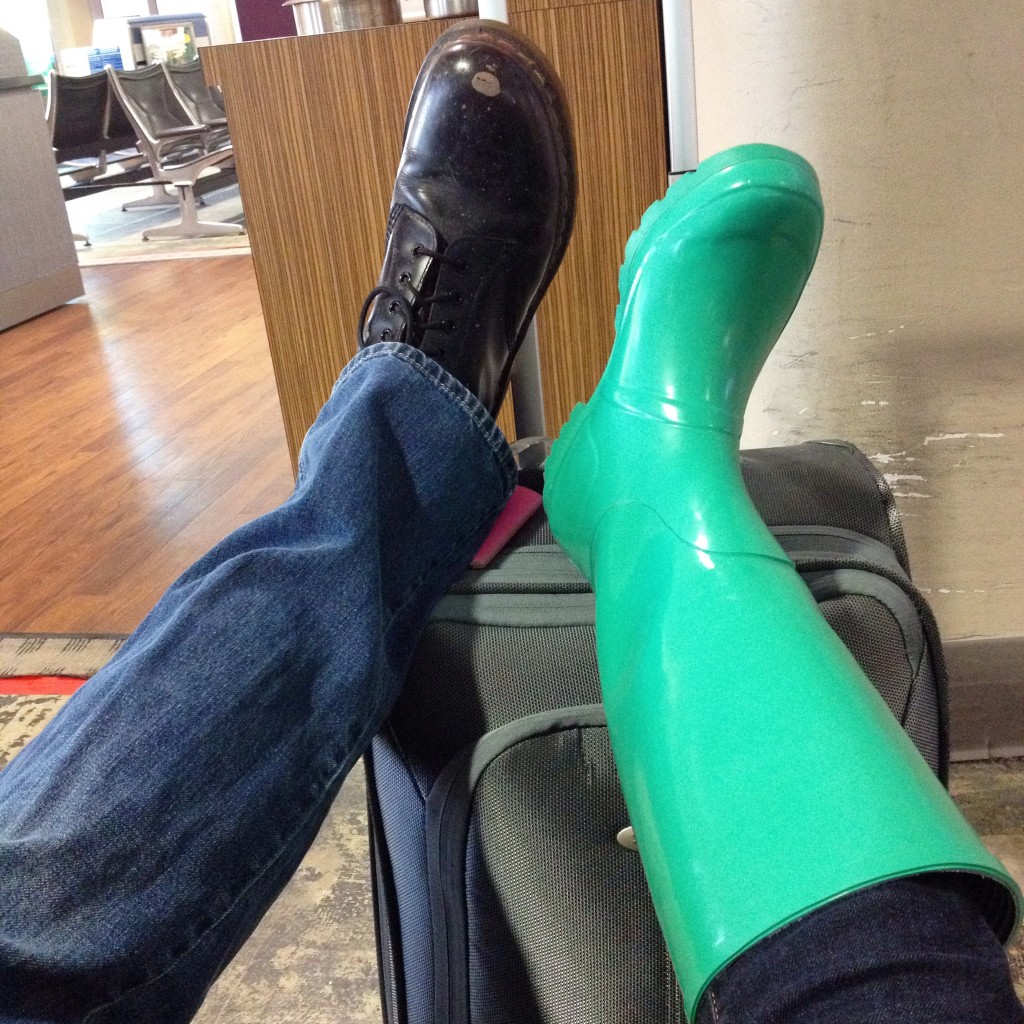 we started our journey in vancouver, b.c. home of the 2010 winter olympics, the canucks hockey team, and the site of a portion of jillian harris’ season of the bachelorette. but first, our 8:00 a.m. outbound plane had a short layover in seattle. and i mean short. while we were snagging a second cup of coffee at starbucks near our connecting gate, we actually heard our names being called on the loudspeaker. whoopsies. since it was technically an international flight, though we already had our boarding passes, we had to show the desk clerks our passports before boarding the plane. we later learned the real reason for the hurry -it was taco truck thursday and we were impeding on judy*, our kind alaskan air attendant’s right to a combination plate. hey, i get it, tacos are serious business.

*i have no idea what her name was, but judy seems fitting

after getting officially checked in, we boarded our puddle jumper flight (oh joy) for the 35 minute jaunt across country lines. as we exited the plane to retrieve our luggage that had been placed below for weight concerns, we were immediately met with the crisp mountain air i had hoped to find in venturing northward in january. i took a big breath and exhaled and giggled like a five-year old as i saw the cloud of breath leave my mouth and become visible in the sky. it was almost as if i had never experienced a true “winter” before. it was awesome.

we gathered our bags and made our way through customs -what up, canada? thanks for having us! we had researched how to get from the airport to our hotel prior to leaving and found vancouver’s public tram system to be our best (and most cost-effective) option. we purchased two tickets and jumped aboard. a few stops later and we were just a few blocks away from our temporary accommodations -the best western plus in downtown vancouver, located off drake street and just a few streets from the harbor. we checked into our room, threw down our bags and freshened up, then headed out to find a snack. 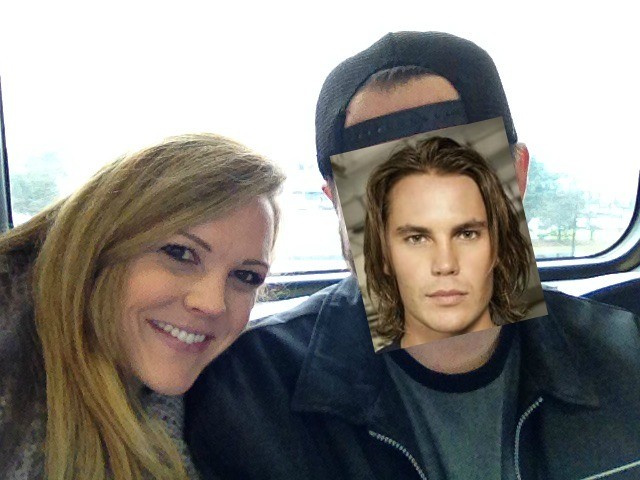 one of the things i love most when planning a trip to an unknown city is looking up restaurant choices for all three meals of the day. because i believe the best vacations are planned around food (duh). so prior to our departure, i had already book-marked a few eateries that i hoped to visit during our tenure in vancouver. one of them was a “healthy, fresh” lebanese place called nuba. two words: homemade falafel. i all but licked my plate clean. 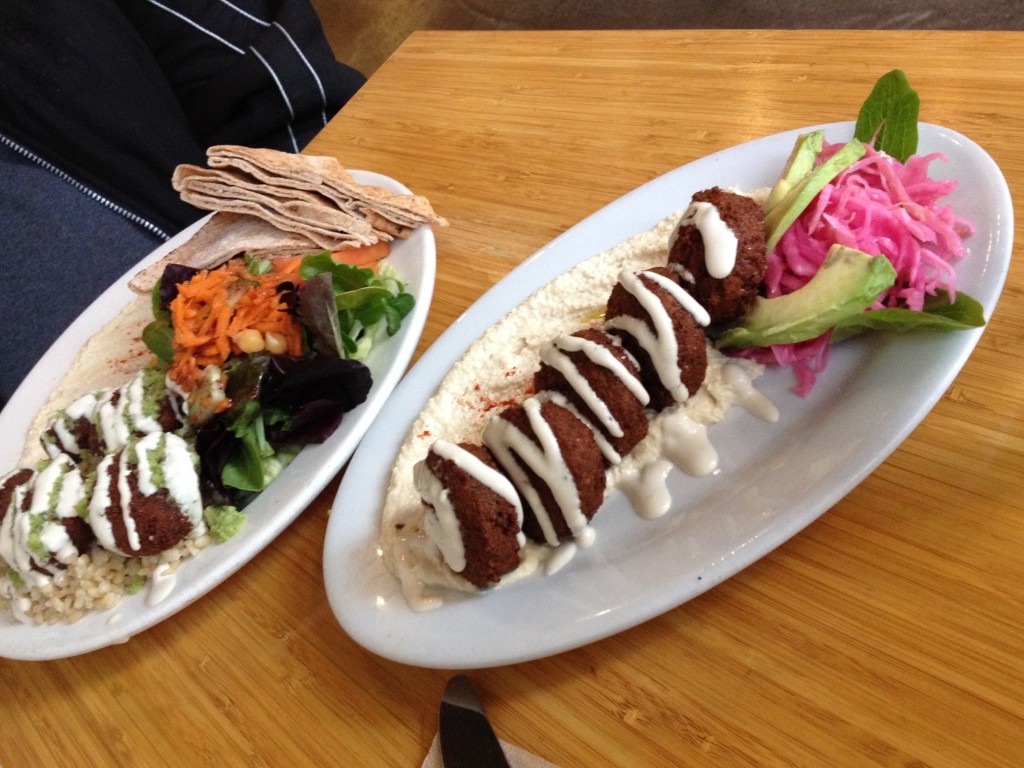 as we finished up our late lunch, we noticed that the cloudy skies we had been met with upon arrival had turned another 50 shades of grey and it was now sprinkling pretty heavily. good thing i had my trusty hooded jacket and wellies! in an interest in saving space in our bags (and avoid looking like tourists), we had forgone umbrellas for our travels, a fact i had been okay with until of course it actually started raining.

we returned to our hotel to relax and hopefully wait out the rain. but by nearly 5 p.m. we decided we couldn’t stay sequestered inside a hotel room forever, we had come to vancouver to explore, and explore we would. neither snow nor rain nor heat nor gloom of night stays would keep us from taking to the town. yep, we were just like the post office.

S found a walking tour of historical vancouver buildings which seemed like the perfect way to discover our surroundings. so he took charge as tour guide and i followed along, bundled beneath my beanie, scarf, and hooded jacket. as we walked along the damp sidewalks, i snapped a few shots of the gorgeous scenery. 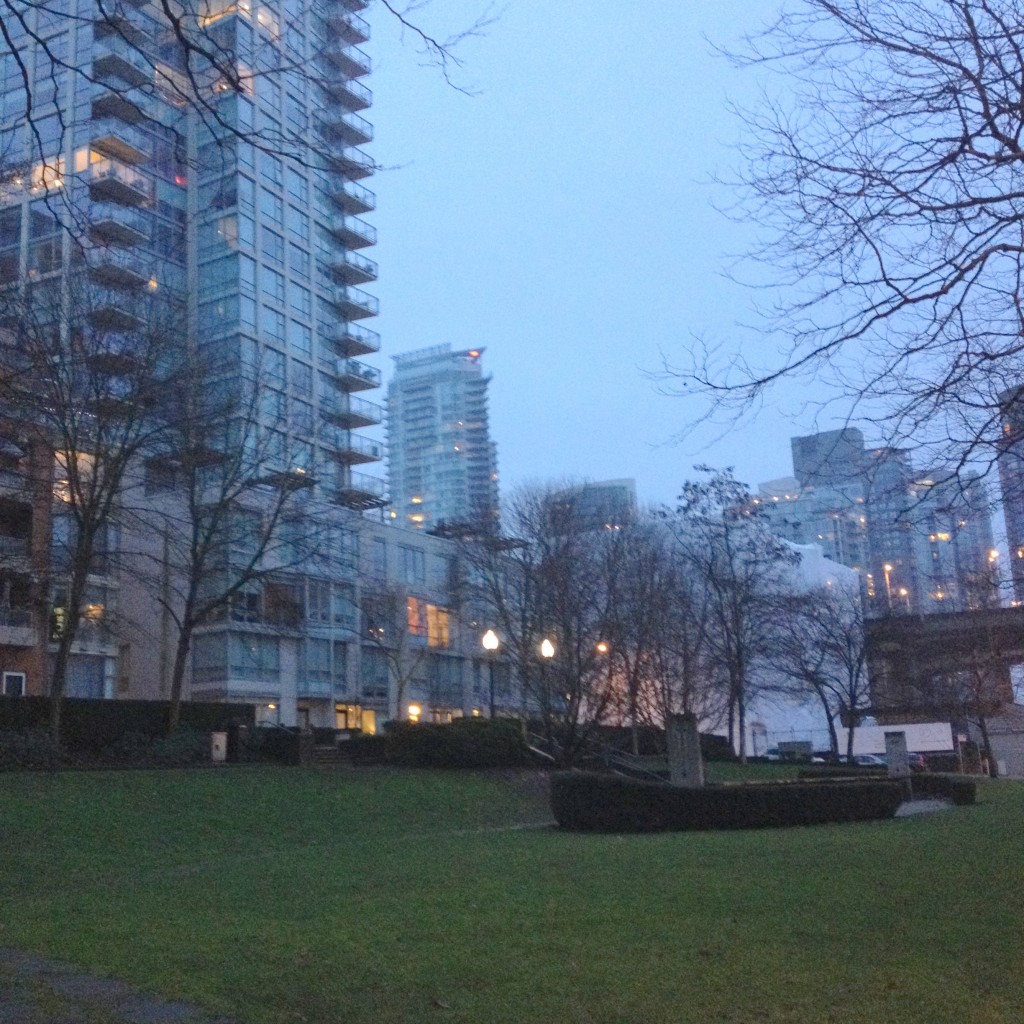 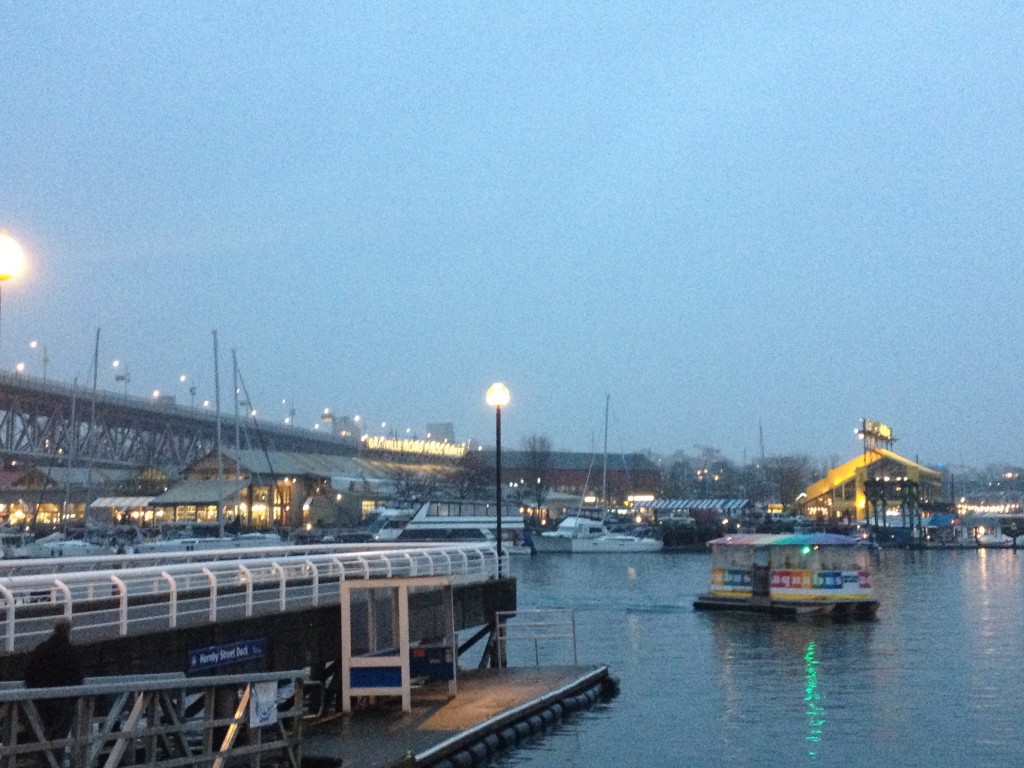 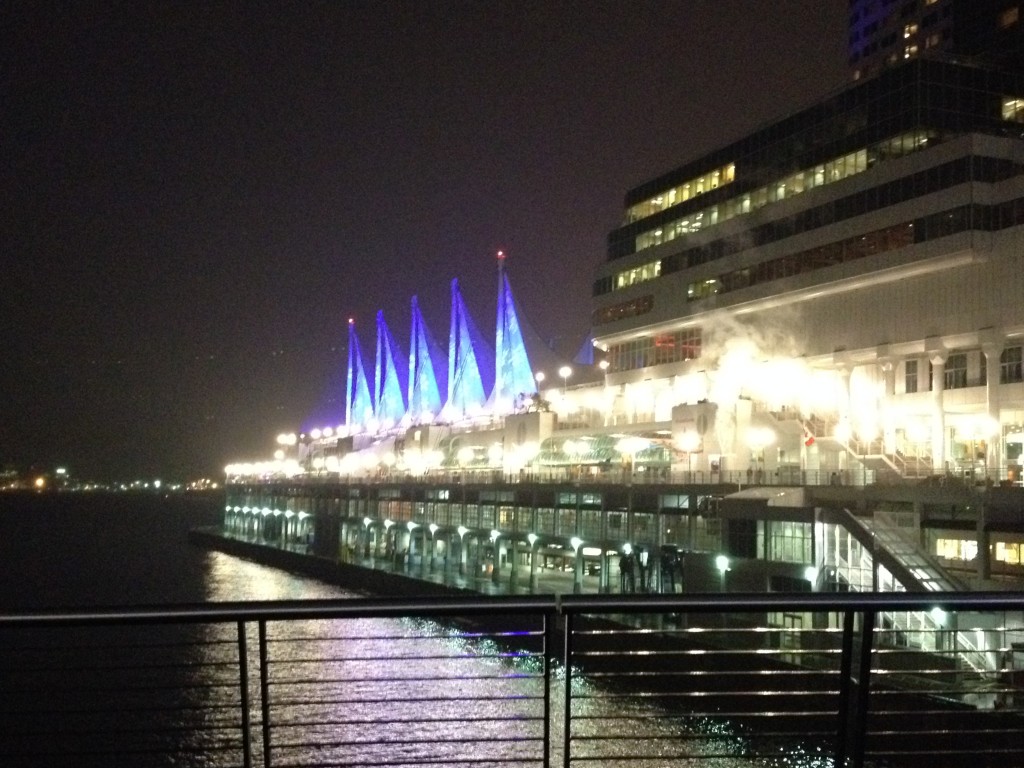 as we walked further toward the waterfront, like my hair and body, my mood became dampened. at no fault of S’s, our seemingly enjoyable stroll through the city had become, well, less than enjoyable. the light sprinkle had become a steady rain and by the time we reached the end of the road, i needed an attitude adjustment. S and i popped into a nearby hotel to regroup. he gave me one of his signature coach taylor pep talks he’s so great at giving and i tucked my hair up into my beanie in a low bun.

alright shawna, let’s stop the nonsense. it’s just rain. and just think, your hair does that cool wavy-thing when it air dries.

with a refreshed outlook from yours truly, we made our way back toward our hotel. while dinner at one of vancouver’s acclaimed restaurants sounded great in theory to honor our first night of vacation, at that point, all we really wanted was to get something fast and make it back to our hotel room where warm pajamas and a diners, drive-ins, and dives marathon were waiting. so upon passing a chipotle, we nodded in agreement and stepped inside.

armed with a burrito, a salad, and a side of guacamole, we made it back to our room and into our jammies soon thereafter. despite minor set-backs, our first day of vacation had ended on a deliciously mexican food-filled high note.

the next morning we awoke to more of the same -dreary skies and wet sidewalks. my prayers for a spontaneous heatwave had not been answered. but our hopes were not completely dashed when we later discovered that the hotel lent out golf-sized umbrellas to its guests. if we were going to have to brave the rain for another day, at least we were properly prepared this time.

with a few options as what to do on our first full day in vancouver given our weather constraints, we headed to breakfast to hash it out over coffee and waffles. again, having done copious culinary research prior to arriving, i had chosen cafe medina as a must-try spot for the most important meal of the day. one look at the restaurant’s signature waffles in the window and i knew i had chosen correctly. S was giddy with anticipation. he ordered a mocha and a plate of waffles while i opted for a plain cup of coffee, their fruit and granola, and a side of scrambled eggs. everything was seriously delicious. it was the perfect way to fuel up for a day of exploring. 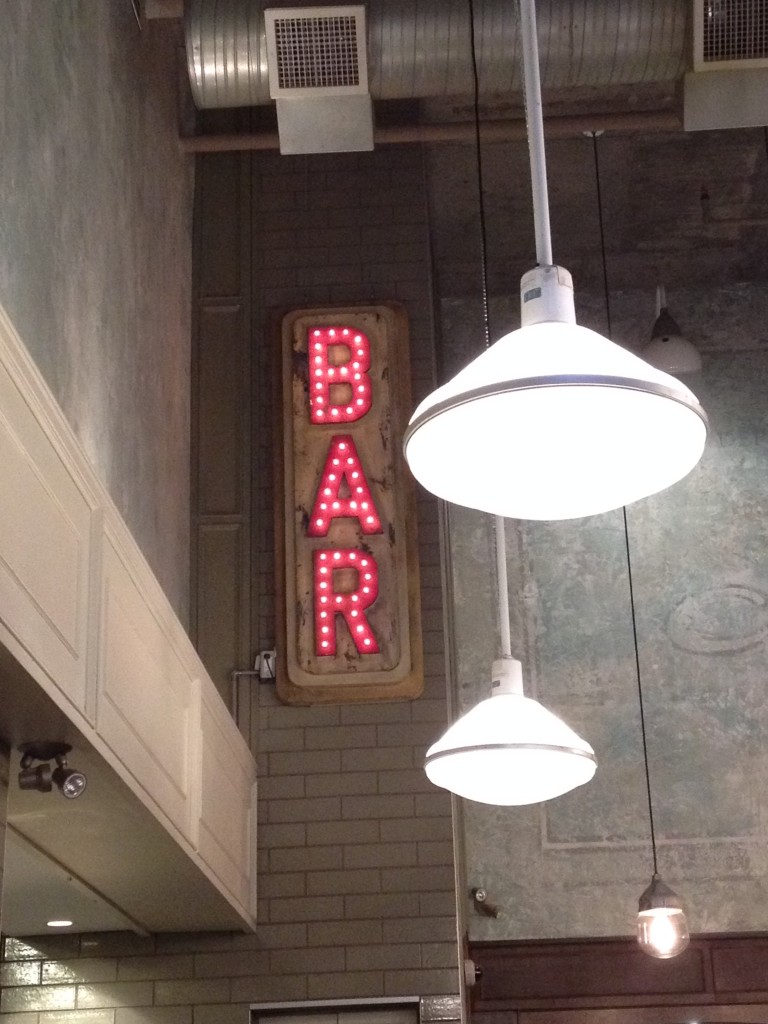 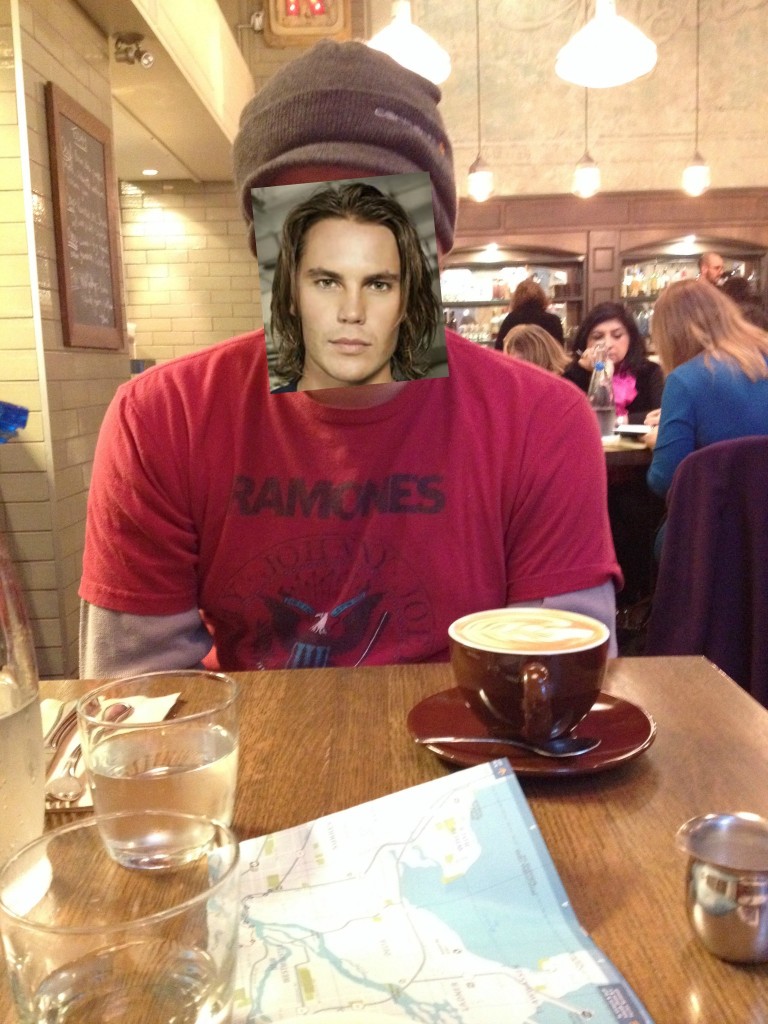 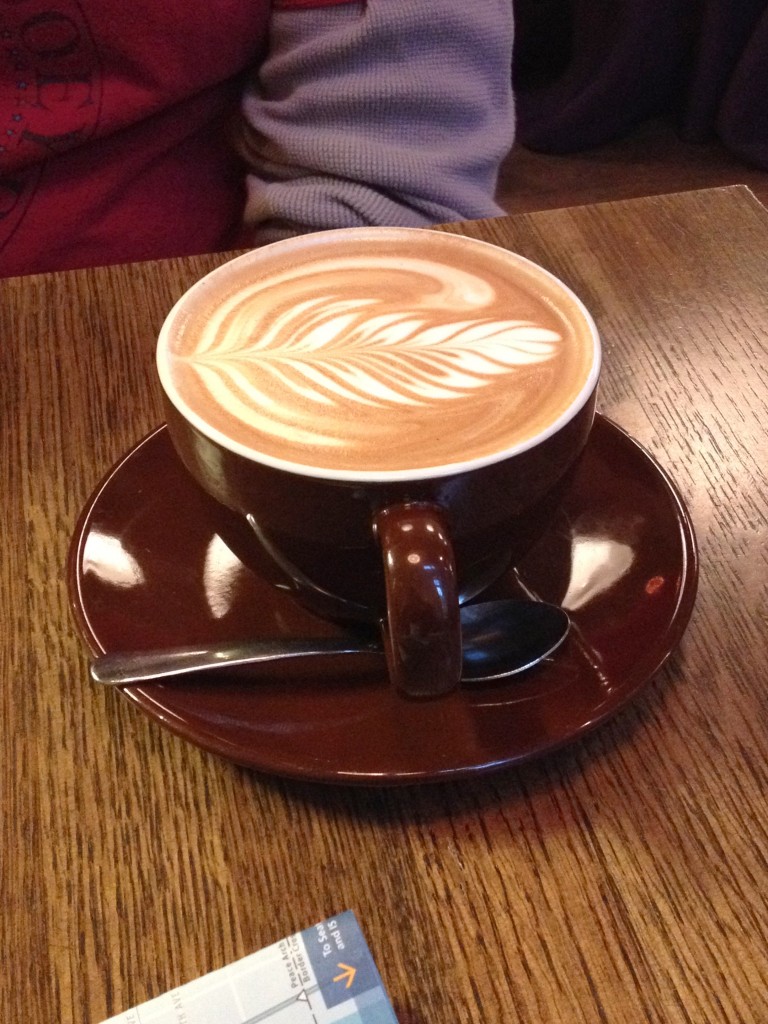 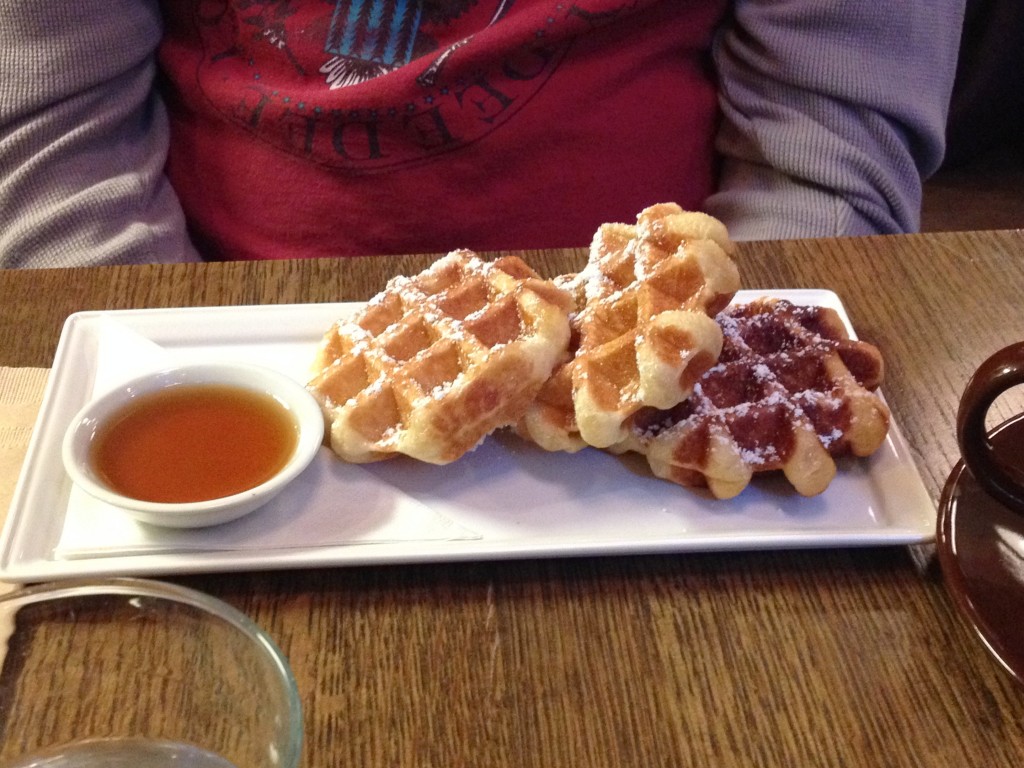 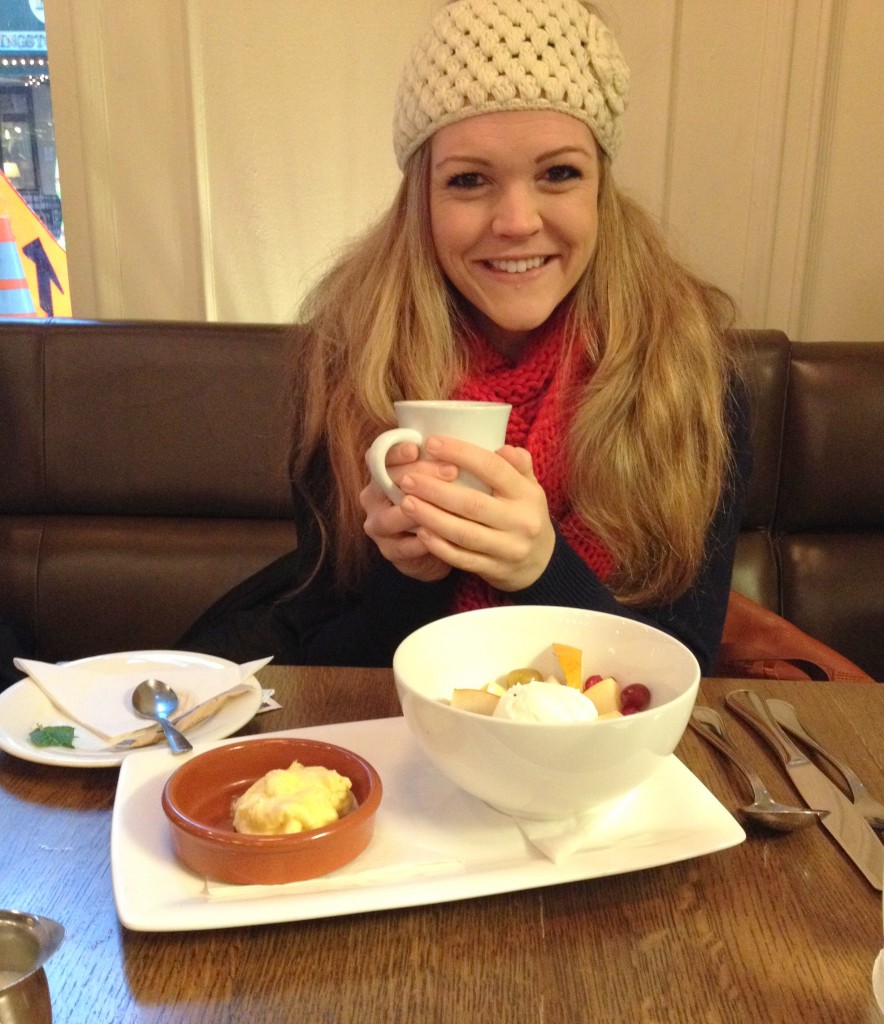 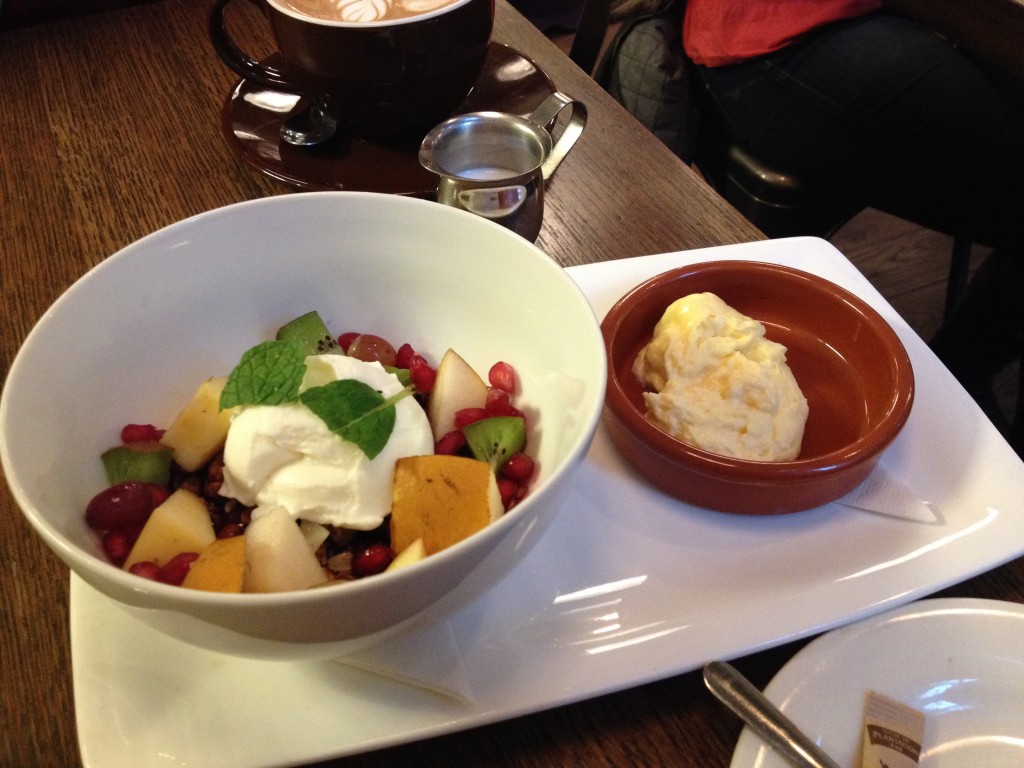 with full bellies (and full hearts) as well as a game plan for how to spend the rest of the day, we hailed a taxi to take us about 30 minutes outside of town, toward UBC (university of british colombia) and the museum of anthropology. which, i learned, is not the same as a museum of archived fashion pieces from my favorite store of the same name. rude.

the museum was pretty fascinating, actually. we even got a bit of inside scoop from a security guard who was guarding the room of a piece done by one of canada’s beloved artists, bill reid. his commentary alone was worth the price of admission. after finishing up there, we crossed the street onto campus and popped inside the morris and helen belkin art gallery which was featuring a contemporary art exhibit by artist tom burrows. we’re sorry, but we don’t get contemporary art. at least it was free admission.

feeling pretty cultured enough for one day, we finally flagged down a cab to take us back into the city. as we returned to the safety (and warmth) of our hotel room, we schemed our next adventure. considering we were running out of indoor activities, i called upon an old standby -“how about a movie?” i googled nearby theaters and discovered that if we left at that moment and hustled, we could walk to 5th avenue cinemas across the bridge to catch the 1:45 p.m. showing of birdman.

we grabbed the umbrellas and broke into a speed walk as we made it up and over the granville bridge (which now looking back was actually a little precarious/scary) and to the theater with even a minute to spare. S grabbed a bag of popcorn and we settled in to see whether or not michael keaton’s golden globe was well-deserved. albeit a tad bit strange, the movie was enjoyable. the acting is indeed pretty amazing and i’m pretty sure i’d like to come back as emma stone in another life.

after the movie, we warmed up with a coffee from starbucks to go and trudged the journey back to the hotel. 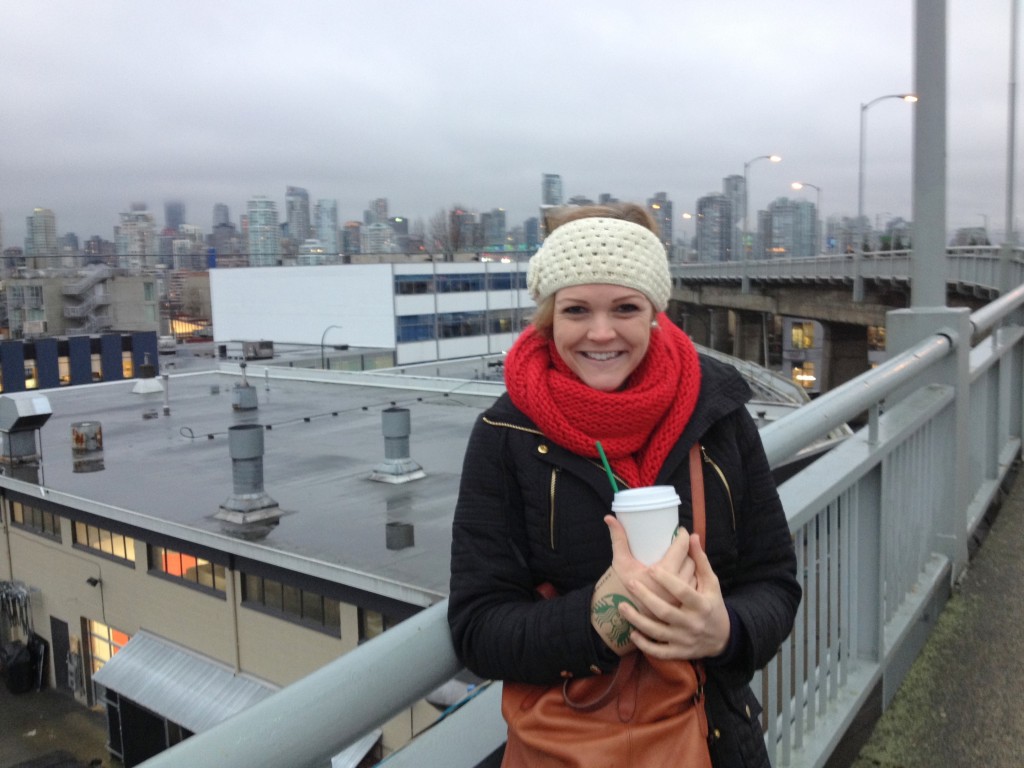 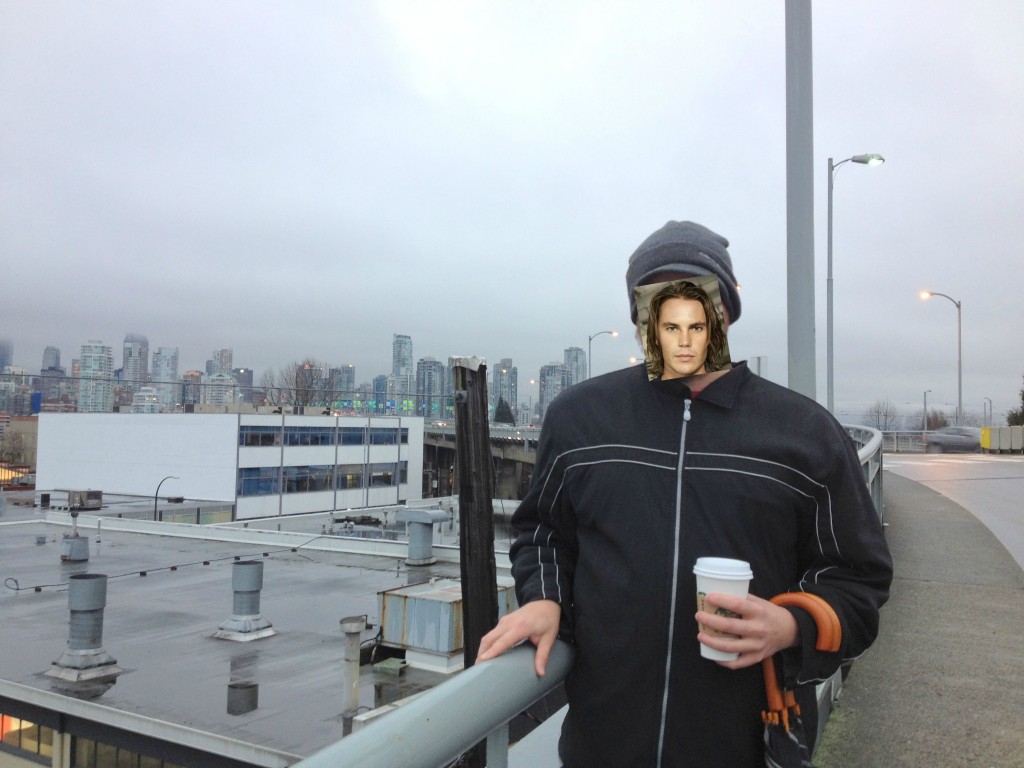 for our last dinner in canada, we decided to venture out for thai food. we discovered a little hole-in-the-wall thai food restaurant called thai basil whose rave yelp reviews made our decision to pay it a visit almost a no-brainer. the fine reviewers of yelp had not let us down. our dinner was delicious and my pad thai had totally fulfilled a craving for asian cuisine. 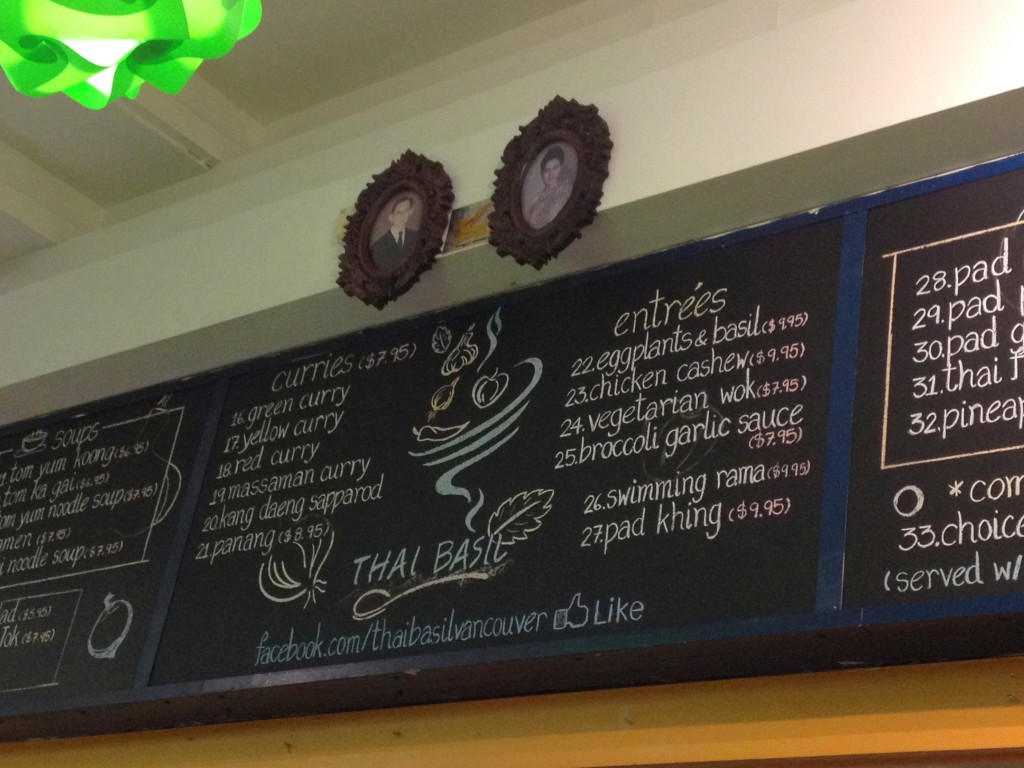 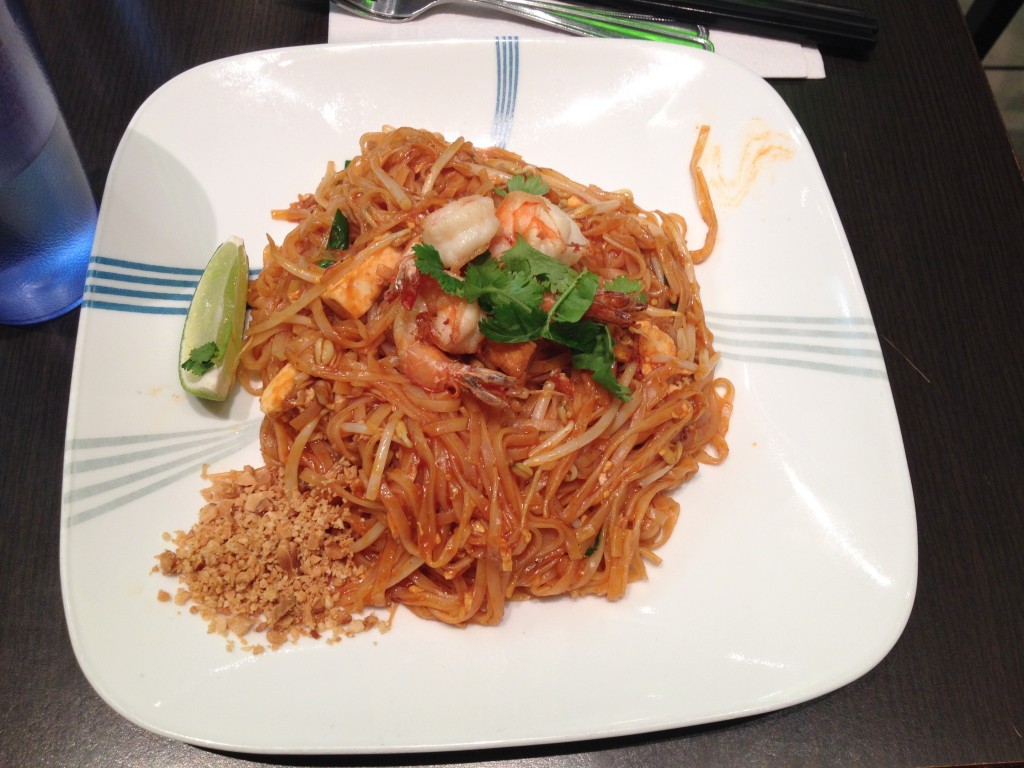 despite the fact that it was friday night (not that we’re ones to take advantage of that fact by a crazy night on the town), we retired to the hotel immediately following dinner to repack and regroup before our early morning departure. instead of flying back to seattle, we had opted to take the amtrak train. our decision to stay grounded was not only less expensive, but also provided the opportunity to see more of canada’s lush evergreen countryside. plus S had never ridden on the train, so it soon became the obvious choice. the not so obvious choice was its scheduled 6:40 a.m. departure.

so we said goodnight to vancouver. we thanked her for her hospitality, good food, and yes, even for her rain (it was a refreshing change to our habitual southern california sun). in the morning it was back into the good ol’ U.S. of A and off to explore the emerald city of seattle.