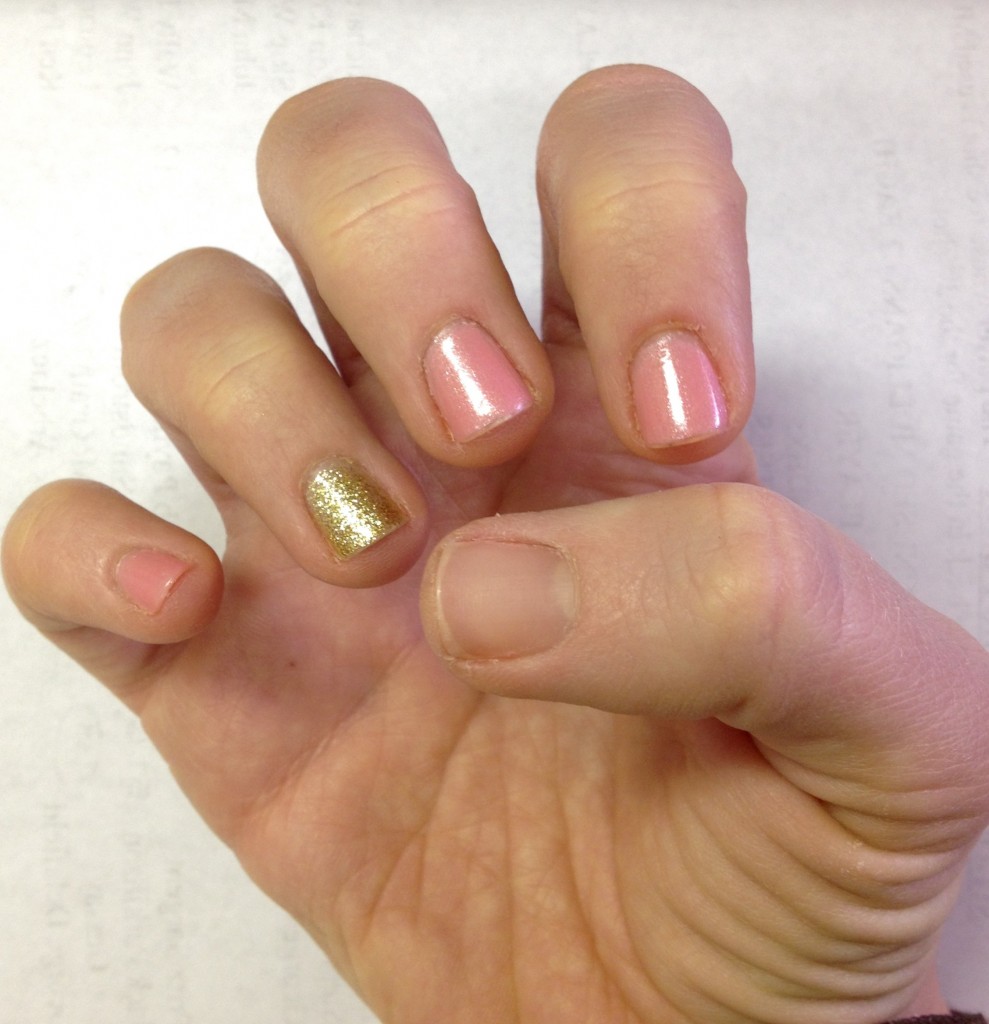 on saturday i got a manicure and pedicure. or a “mani/pedi” as the kids say. anyway, while a monthly(ish) pedicure is nothing new, it was the first painted manicure i’ve had in years. yes, years. i tend to be rough with my hands so nail polish lasts all but about 2.5 seconds on my little digits.

but i was feeling frisky. “#yolo,” i shouted. and instead of just asking for the manicurist to “buff” my nail beds to achieve that smooth sheen, i grabbed a petal pink color with a hint of sparkle and a bottle of gold glitter polish as well as a bright fuchsia for my toes and headed to the chair.

the only downside about having a manicure at the same time as your pedicure is that you have no free hands to flip the pages of the trashy magazine you swear you only ever read when you’re at the salon (either nail or hair). so i was remiss in catching up on jen aniston’s baby woes or princess kate’s pregnancy cravings, however, they were re-airing the special, “the price of gold“-one of espn’s 30 for 30 films investigating the tonya harding/nancy kerigan scandal on tv and even with the subtitles, i was glued to that screen. so a fair alternative for entertainment if you ask me.

anyway, after about an hour in the chair (god bless its back-massaging feature), i emerged with pink fingernails and pink toes. i paid and waddled out to my car on the temporary foam flip-flops they give you when you forget your own at home. it’s important to note that it is literally a 45 second drive home from the nail salon. and that’s if you hit red lights at the two traffic signals along the way. well call it a world record but somewhere in the process of getting into my car and making the sub-minute drive up the hill to my condo, i smudged the polish on my right thumb nail.

and this is why we can’t have nice things, i thought to myself.

i attempted to gingerly brush the wrinkled paint back into place. but the more i smoothed it over, the more the polish just stuck to itself and peeled off of the nail bed. ugh.

remembering that i had been gifted a pink polish last valentine’s day, when i got home, i located it in my medicine cabinet, gave it a good shake and attempted to carefully trace over the blunder with its tiny brush. i looked down to admire my work. oof, i had seen better paint jobs from a 4-year old. but i couldn’t stop. i continued to apply layer after layer of the bubble-gum hued paint, rationalizing that if i just glopped on more polish, i’d eventually erase my original boo boo.

the problem with that is that it wasn’t drying quick enough for me to continue to go about the business of my day. i attempted to blow dry it (yep, true story), but the hot air just kind of pushed around the polish on my nail, rather than drying out its moisture. frustrated and impatient, i found a bottle of nail polish remover, stripped the thumb of its umpteen layers of paint and attempted to recover it again, this time with a steadier hand and a less-saturated brush.

okay, i think second time’s a charm, i thought as i held my hand out to admire my handiwork (pun intended). i blew on it a few times before waiting what i believed to be a considerate amount of time. then i hopped in the shower. rookie mistake. in a matter of moments, tiny pink paint chips began to rain down into the tub.

i got out of the shower and reached for the bottle of nail polish remover a second time. whatever right thumbnail, you win. maybe you’re an exhibitionist, who am i to rob you of that opportunity?

i know i probably could have gone back to the salon to get it fixed at little to no charge, but i think it was a combination of stubbornness, laziness, and an overall sentiment of “meh, i’m over it.”

i’m hoping this trend catches on.

and if not, i think it’s best if i stick to pedicures only, don’t you?

p.s. if you’re looking for a great nail salon, i highly recommend french’s nails & spa -they have a few of locations san diego.