we should have eaten our wheaties.

i suppose i had come close, i had had a bowl of oatmeal when i got home from teaching my saturday barre classes…

but furniture shopping isn’t for the faint of heart, guys.

it’s a lot of walking around show rooms and getting into your car only to drive 100 yards to the next store (i will say it’s efficient having things like “furniture row”). it’s a lot of “just looking today”‘s and avoidance of direct eye contact with the saleslady with the aggressively drawn-in eyebrows who is headed your way. it’s a lot of sitting down and getting up, rubbing palms across fabrics, and squishing pillows, and pretending not to be too sticker-shocked when you flip the card over to reveal the couch’s price tag.

like i said, it’s not for the faint of heart.

but S was a champ and accompanied me in search of a new couch on saturday. we started at living spaces, then ventured to mor furniture, stopped by jerome’s, and finished the afternoon off with a trip to bassett furniture. considering the fact that i usually come to decisions by determining what i don’t want over knowing what i do, we were able to decipher rather quickly which were the most viable contenders. mor smelled like cheap leather and popcorn (marketing strategy = smell like a movie theater) and offered the worst of the four in selection, jerome’s was right behind with faint smells of chocolate chip cookies, which was certainly an upgrade from the popcorn, but the inventory was a little too far out of our taste-range -think blue velvet sectionals and white 70’s-style furniture. basset could have been a contender as they allow you to essentially design/build your perfect sofa, but when margo came back with a quote on how much said customized piece would be, we felt like asking her, “oh, we only asked for you to price ONE couch, not seven.”

which led us back to the first stop we made that day (isn’t the first stop usually the best one anyway?), the living spaces showroom. having perused through their selection on the living spaces website prior to arriving at the store, i had a general idea of what they’d have to offer. so when we walked through their double doors, we were able to make a bee-line for the grey fabric couches and avoid any awkward small talk with the salespeople who were already swarming like sharks in the water.

i imagine this is what goldilocks felt like in testing out the three bears’ beds. this one is too small, this one is too big, this one is just right. we tried out a few before landing upon the thompson model in a light grey and polyester fabric. aesthetics aside, one of the big things i look for in a couch is the ability to cozy up on it which is why deep cushions are very important. at 6′ 2″, S was the official tester to determine if a couch’s depth was adequate for full cuddling capabilities. when he sat down on the thompson sofa, his feet dangled above the ground when he slid himself all the way back into the crevice of the pillows. success!

as S lounged on the three-seat sofa, i eyed the adjacent chair -which looked like an armchair and a chaise lounge had a lovechild. i immediately kicked off my shoes and curled up on it, extending my legs onto the ottoman as well. for as long as i can remember, i’ve always wanted a chaise of my own. this oversized chair was the next best thing. though i didn’t intend on getting more than just the couch, seeing the set side by side, i knew it would be worth the investment. 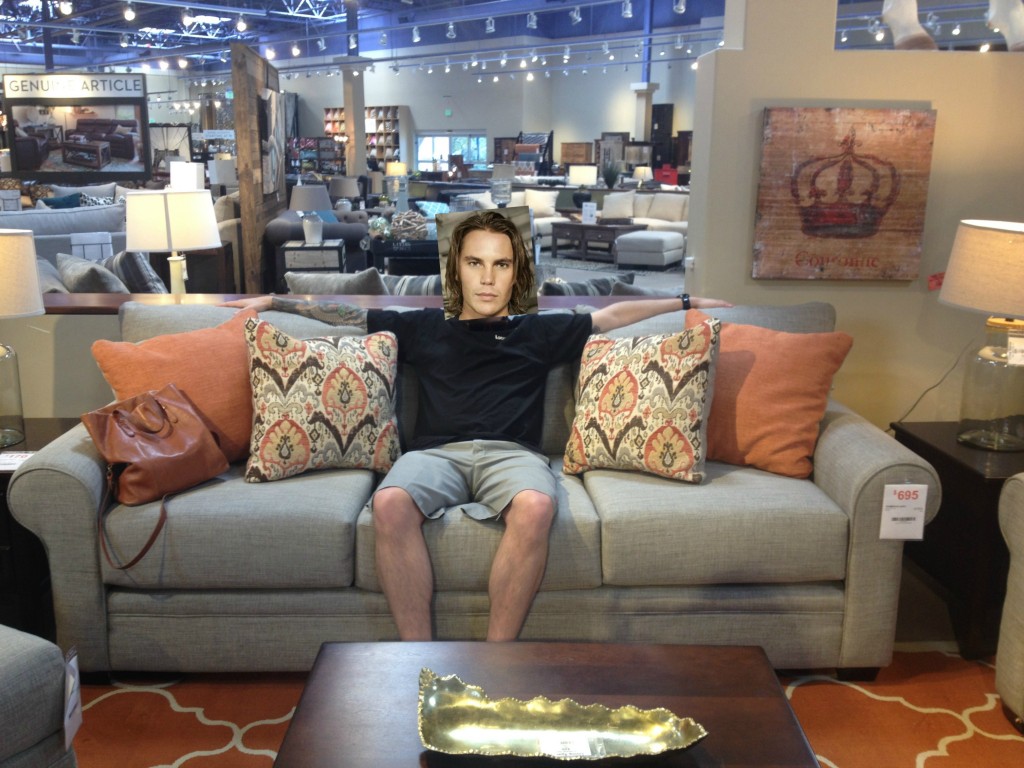 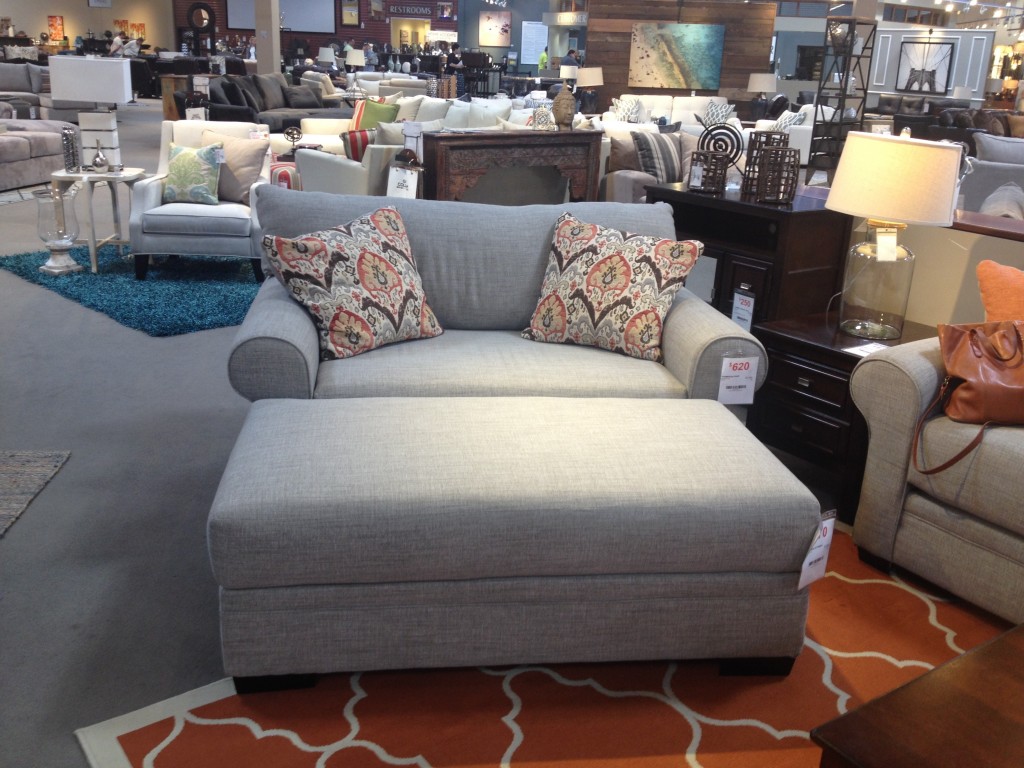 truth be told, we did not walk out of the showroom with new furniture this weekend. since it was our first stop on the tour, i had wanted to wait until we had weighed all of our options before taking the plunge. but now after seeing what else the furniture world has for me these days, i know the thompson model is the one for me.

so the next step will be putting my current couches up for sale on craigslist to make room for the new inventory.

or perhaps you’re in need of a new couch? if so, i have three -a well-loved khaki-colored ikea gem and twin dark blue love seats originally from bassett furniture via my parent’s living room (i didn’t steal them, they gladly donated to the cause). contact me in interested 🙂