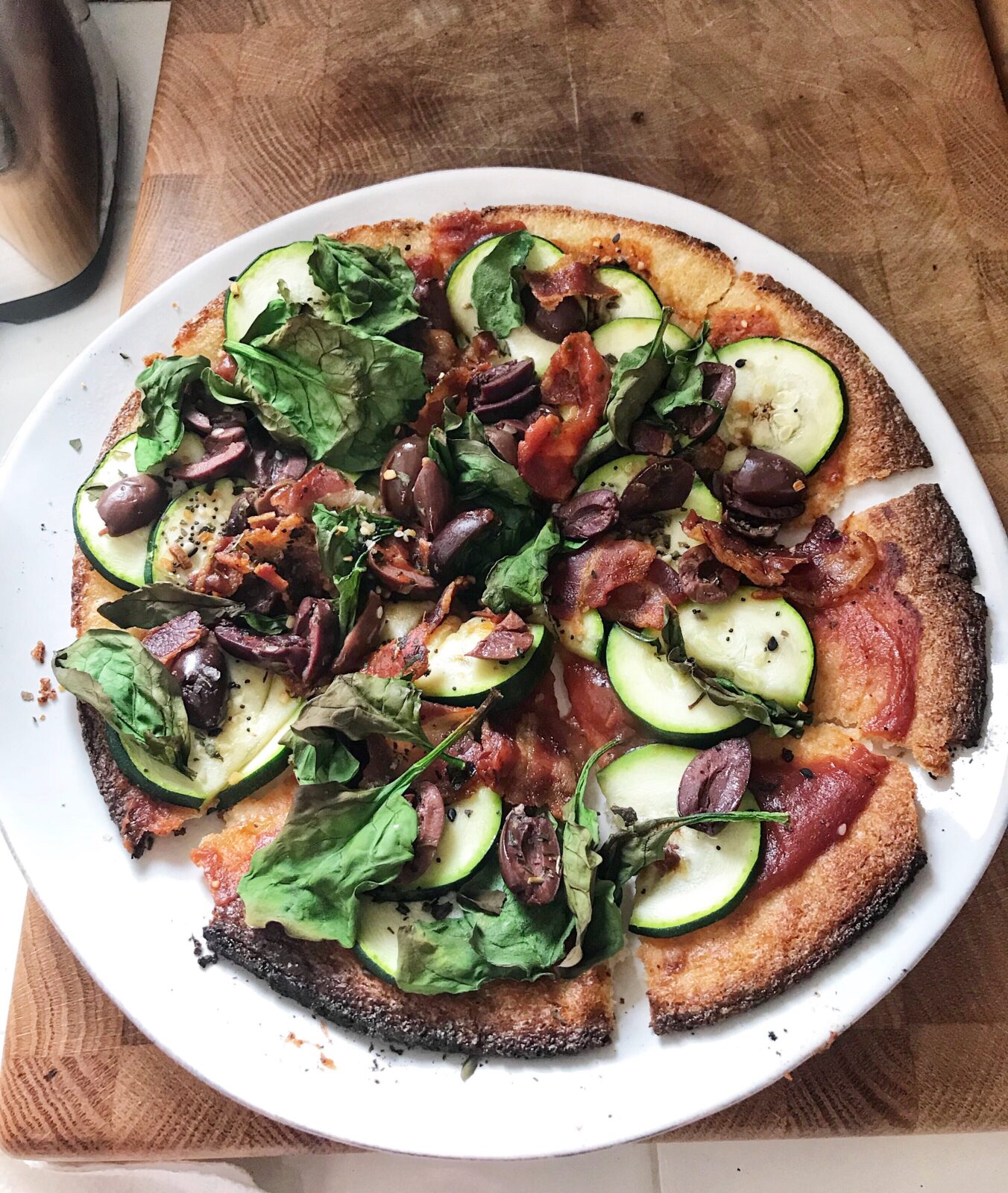 if you follow me on instagram (@shawnaleeann), you may have seen that for the past two sundays, S and i have had our own little make-your-own pizza night. it started to fulfill a craving but honestly, it’s something i’m coming to look forward to each week!

so in honor of this sunday’s pizza party (can’t stop, won’t stop), i’m sharing the super easy recipe for my go-to pie. oh and if you’re wondering, S eats his own gluten-filled version. he uses this trader joe’s dough and tops it with sauce, cheese, pepperonis and jalapenos. his & hers and everyone’s happy!

speaking of happy, make this pizza ASAP and your tummy is sure to be:

ingredients (all can be purchased at trader joe’s!):

handful of pitted kalamata olives, sliced in half

himalayan pink sea salt, dried basil + everything but the bagel seasoning to taste

*you’ll notice an absence of cheese on my pizza. being dairy-free, i usually forgo cheese altogether, but if you’re looking for a non-dairy alternative, daiya mozzarella shreds is the best one i’ve found. the cheese actually melts!

okay let’s talk about this crust for 2.5. it’s definitely a different animal than one made from a traditional bread-based dough. it’s pretty delicate, so it has to be pre-cooked for it to maintain its shape. after trial and error, i’ve come to experience that it needs to be cooked a tad bit longer than the instructions on the package indicate. i pre-cook the crust at 450-degrees for 14 minutes on one side, and an additional 14 minutes after it’s flipped. THEN i turn up the oven to high broil and broil it for an extra 5 minutes. you can tell from the photo above that this resulted in a tad bit crispier crust, but i kind of like my food charred. especially my vegetables. so maybe knock off a couple minutes if you prefer the less burned look. after the crust has been pre-cooked, it’s time to assemble the toppings! i layer on about 1/4 cup of pizza sauce, spread it evenly, then distribute the zucchini. i usually add a bit of salt and everything but the bagel seasoning to flavor the vegetables since i don’t pre-roast them. then go on the olives and crumbled bacon and finally a heaping handful of spinach. the pizza then goes back into a 450-degree oven for about 8-10 minutes (long enough to get the spinach wilty and to soften the zucchini). let the pizza cool for a couple minutes before using a pizza cutter to slice it up for eating!

voila! gluten-free, dairy-free pizza to fight off the sunday scaries and get you excited for a new week.