seeing that snow is falling in most parts of the country and it’s only a matter of time until i see goggle and beanie-clad selfies clogging up my instagram newsfeed, i thought i’d share my snow-sport testimony. or you know, the lack there of. so enjoy.

file under things i forgot to learn how to do in my youth: ski, snowboard, or do much of any sort of snow-related sports (angel-making and snowmen forming excluded, let’s be honest, i make a mean frosty doppelganger).

okay, so maybe there was that one time when i was about three when we went up to mammoth and they strapped skis onto my little body and pushed me down the hill in my navy snow onesie and i made it to the bottom with all limbs attached. but when your center of gravity is that low to the ground and the actual “hill” is more of a slight incline and there is relatively zero skill involved except you know, allowing gravity to work its magic, i don’t think that necessarily counts.

so when i was asked if i’d like to accompany my then college best friend with her family and their family friends to big bear over christmas break of my freshman year, i may have fibbed a little when i said that i could ski. i mean, “ski” is a vague term, right?

anyway, first things first, if i was going to pretend as though i knew what i was doing on the slopes, i should at least dress the part. but with the price of ski clothes what they are and the reality that this inaugural trip would more than likely be my first and last, my parents were skeptical about gifting me a new snowdrobe (that’s snow + wardrobe). so mom offered up her stash of 80’s ski jackets of which i chose the pastel pink one (natch) and we supplemented covering up my bottom half with a quick run to big 5 sporting good store where i went home with a pair of some no-name brand snowboarding pants. the remaining parts of my outfit were a mish-mash of items i already had -a fleece sweatshirt (also in pastel pink, these details will help paint the visual later), a pair of long-johns (for under the pants), a long-sleeve tee, and wait for it, a pastel pink fleece beanie.

i mean, if i wasn’t already asking for it.

anyway, in addition to my pepto bismol-sponsored ski outfit, i packed a few additional non-ski appropriate outfits in case we decided to take a break from the slopes and explore the town. so with my suitcase in hand, and a hopeful heart, i drove to my friends house and prayed that at weekend’s end, i would return in once piece.

we arrived in big bear late that friday evening and immediately headed over the local pizza place for dinner. i remember already having butterflies that night as we discussed our plans for the following morning. that or maybe i was just hungry. either way, i was the opposite of a cool cucumber. anyway, after dinner we made our way back to the cabin, solidified the schedule for the next day, and as we drifted off the slumberland, i hoped that maybe, just maybe, the magical ski elves would invade my body overnight and equip me with the talents of picabo street.

turns out the only “peekaboo”i would be playing was with the snow. as it covered nearly every inch of my body for a large duration of that sunny saturday.

we woke up early on saturday morning to ensure we would beat the crowds at the ski rental shop. there we were outfitted with all of the necessary equipment (boots, skis & poles) and once i heard the click of those boots snap around my ankles, i knew there was no turning back. alright, let’s do this.

once our day passes had been purchased and our valuables secured away in the rented lockers, we were ready to hit the slopes. we headed over the staging area to strap on our skis before catching the chairlift that would take us up the mountain. and it was only after i had snapped myself into my skis, stood up to find my balance, and then promptly took off down the ice gaining momentum and speed as i skated uncontrollably into a crowd of innocent bystanders* that i knew how the rest of the afternoon would play out. this would be one of the most painful -both physically and for my ego -days of my life. *in case you were wondering, the only way i was able to stop myself and avoid pummeling through my fellow mountain-goers was to stick out my hands to break my fall. so goodbye palm skin, it was nice knowing you.

so with one embarrassing moment under my belt, it was time to rack up some more. next stop? the chairlift! now i’m not sure if you’ve ever attempted to get onto a chairlift gracefully but i’m convinced that it can’t be done. i’d like to think that i’m a fairly coordinated individual but somehow trying to balance myself on skis, look over my shoulder, and sit down on the bench seat as it was moving (at an surprisingly quick pace) was too much for me to handle. if it hadn’t been for my friend’s older brother who reached out and grabbed me by my puffer jacket as i began to take a nose-dive into the powder below our feet, i would have probably broken my face.

once situated, i clung tightly as the lift carried us to the top of the mountain. maybe it was the altitude or the picturesque views or the adrenaline from my recent near death experience, but i didn’t even question how i would be getting back down the mountain once we reached the peak. when we got off, i just figured there was another lift that would take me back down. “that was a fun little ride, so i’m just going to take the chair lift back down and do some bunny slopes and meet up with y’all later, k?”

so turns out there’s only one way down the mountain. and it doesn’t involve a chairlift. it was in that moment that i realized that the only way i was getting back to the safety of level ground was to tackle the snow-covered slope before me. and i basically had a panic attack right then and there.

but somehow with the coaxing of my friend and her family friends, too, i pulled myself together and started my descent. bless his heart -thankfully one of the family friends stayed with me the entire way. he was so extremely patient and helped pick me up every time i toppled over. which was, i’m not even exaggerating, every 50 feet or so. whenever i began to pick up speed, he would yell “pizza!” which is basically code word for “stop!” in the skiing world. it’s confusing since this kind of pizza has nothing to do with dough, sauce, or pepperonis (darn). it means turning your feet in pigeon-toed to form a pizza slice shape. this formation aids in decreasing your speed. in my case, this formation also aided in me promptly falling over, too. i’m fairly certain i spent more time in the horizontal position than the vertical one that entire trip down the mountain. also, can we talk about how soft and fluffy they make snow appear on tv? because that is a flat out lie. snow is not soft nor is it fluffy. it is hard and cold and the opposite of inviting.

but by the grace of sweet baby Jesus, i finally made it down to flat ground. i think the entire ordeal took about two hours. in that amount of time, i’m pretty sure any seasoned skiier could have made at least three full trips up and back. but whatever, i wasn’t there to set records. i just wanted to make it back to the lodge with no broken bones and my ego in tact (hey 50% ain’t bad).

i’m not gonna lie, following my big run, i did feel a little invincible. so i took a few trips through the bunny slopes just to capitalize on said feeling. but as my ankles started to throb and my forearms began to burn, i knew that i had reached my snow capacity for the day. so i de-skiied, headed back to the lockers to retrieve my things, and retired in the nearby dining hall.

when we woke up the next day (after an evening of home alone and balderdash), i literally could not feel anything from my neck down. so while our guest pass was actually good for two days, i confidently announced that shawna would happily sit this one out.

and the rest of the weekend was spent in pajamas under bags of frozen peas and under the influence of multiple doses of advil.

and given this account, it should come as no surprise that i haven’t picked up a ski pole or latched a ski boot since. i mean, i’m not completely opposed to channeling my inner lindsey vonn (circa 2002, before that whole dating tiger woods thing) in the future. with the proper incentive-slash-bribing, i can be convinced to try most anything. but for now, when it comes to snow-related activities, i’ll stick with making snow-angels. 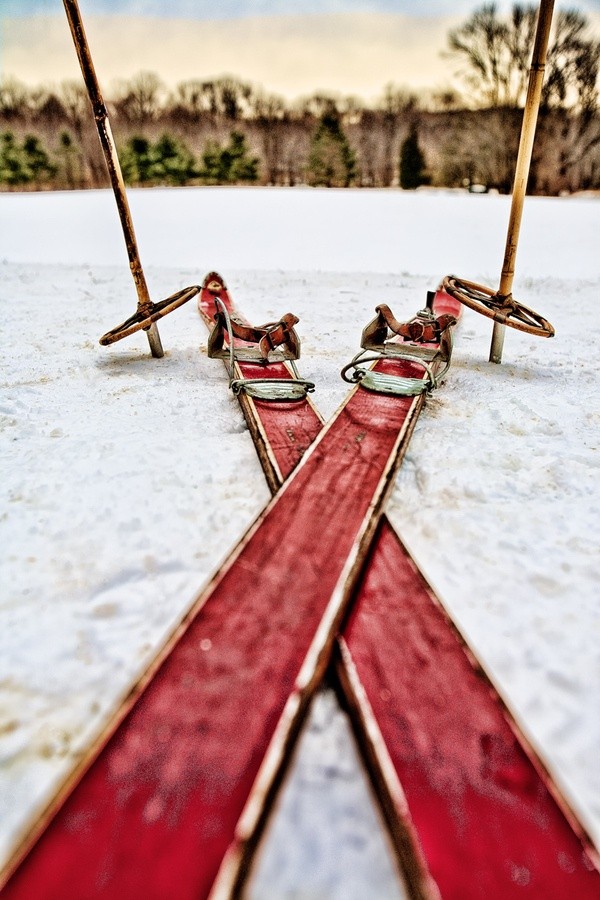