i wrote this post back in the fall for an online publication. though they promised they would use it, they never did (cue “wah wah” sound effect). but their loss is your gain. because i’ve decided that it still deserves internet exposure. so, there.

i never believed i was quite “cool” enough to don a fedora. fedoras were for hipsters who wore skinny jeans, ate acai bowls and let their hair dry naturally. they were for people in a band (and maybe their groupies, too), for those who rocked ray ban wayfarers and who honored a vegan lifestyle. and though i now own three pairs of skinny jeans and have put the blow dryer on a holiday hiatus, the aforementioned adjectives did not describe yours truly. so i refrained from purchasing that straw hat, because, you know, i wasn’t “cool.”

but then one day while perusing urban outfitter’s website, in a moment of fashion fearlessness, i bought a fedora -an asymmetrical one at that -and i prayed that somewhere between three and five business days’ time, i would muster enough “cool” points to wear that hat with pride. and when it did find its way to my doorstep and onto my pretty little head, when i glanced into the mirror and took in my reflection for the very first time, i was pleasantly surprised at what i saw.

the true test was to take my ensemble out of the confines of my bedroom and into the real world where my head would certainly be scrutinized by many a more fashionable stranger than me. and so, with fingers, toes and eyes crossed (okay, so maybe not the eyes), i ventured out.

and then i heard it. “i simply LOVE your hat! where did you get it?”

a compliment from a passerby; her words acting as a validation that my fashion risk had not been taken in vain.

and just like that, i became a fedora wearer. no, not because some stranger applauded my choice of head wear (although, i’m not going to lie, it certainly felt good), but because i had stopped believing i wasn’t “cool” enough to wear one.

and i think that’s what fashion is all about -not subscribing to what the experts in new york, paris and milan dictate what is “in” and who is suited to wear it (because that usually just means models and celebrities). fashion is about taking risks; it’s about finding your personal style through trial and error and realizing the only critic you have to answer to ism, well, you! we are blessed enough to live in a country where we have a right to freedom of expression and i believe this freedom extends further than the written and spoken word. the choices we make when dressing ourselves in the morning are simply another way for us to share with the world, “hey world, this is me, and i’m proud of it!”

whether it’s a fedora, or an over-sized flower pin, layers of jewels or an unexpected color combination, as long as you wear that piece of apparel or accessory with confidence and a smile (by FAR the best accessory), no one can touch you. because when that confidence comes from within yourself, you’ll never have to worry about being “cool” enough to wear anything. 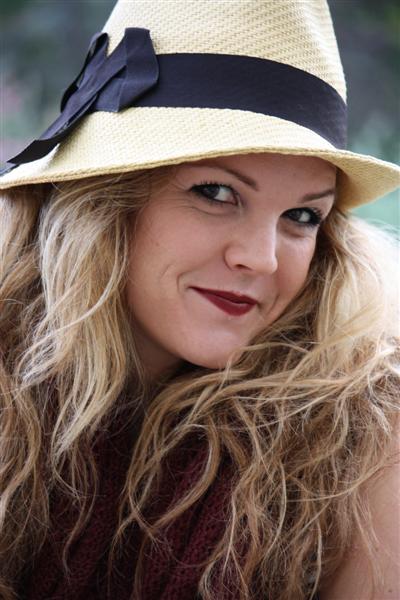 gratuitous photo of me in a fedora

feeling a bit parched, i trotted into starbucks just a hair shy of 5pm for my usual venti ice water. en route to pure barre (as if i’m ever not), i was sporting the usual fare: black lululemon wunder under crops (they really are “wunder”ous), a lycra workout top, and of course, one very large white flower-adorned headband (i find it serves two purposes: keeps the in process of growing-out bangs out of my face, and adds a little something to my otherwise ho-hum outfit. whoever said you can’t accessorize your workout wear obviously hasn’t met me). anyway, i stood patiently in line until the barista was ready to take my order. as if they didn’t already know what i was going to request (i mean, they might as well have my photo on the wall with the caption -“this girl never buys anything, only asks for free water!”). but the kind gent happily greeted me and pretended to act surprised as i ordered the uje (that’s slang for “usual,” i think that’s how you would spell it phonetically).

and he looked up at me and smiled. and then, instead of asking for my name (i still think it’s sweet they write your names on items you’re not actually shelling out money for), he inquired something different entirely.

and for a split second i had all but forgotten that there was a giant flower protruding from my skull, and as a result, his question left me slightly confused.

but then i could see the ivory petals in my peripheral vision and quickly snapped back into reality.

“of course you can,” i responded with a chuckle.

and that’s exactly what he did.

bless his heart, he didn't exactly get the spelling right.

and sure, i realize that in wrapping a floral-adorned elastic band around my head i’m not only erasing at least five years off of my age (so if i get mistaken for 17, does this mean i’m 12? because i don’t want to be 12, that was a rough year) but am also setting myself up for instances such as this…

but you know what? i love flowers. and i love headbands. and put them together, and i do believe that is a happy marriage (much like chocolate and peanut butter, obviously).

so while i still may harbor an unhealthy phobia of breaching whales (among other things), i’ve discovered that fear stakes no claim in my love for fashion. so bring on your fedoras and floral headbands, people (and by “people” i’m pretty much talking to forever 21). i will wear them fearlessly.