so you know, despite my clear absence from the kitchen on thursday (i mean, those naps weren’t going to just take themselves), and my overall pretty boring repertoire of oatmeal, steamed vegetables, and gardenburgers, i CAN, indeed follow a recipe. so when the chillier (ha! no pun intended, and it’s all relative, people) weather called for something a bit heartier for our sunday meal, i channelled by inner martha (or rachael, or bobby, or whatever chef you know and admire) and put into action operation chili (with special mission cornbread on the side).

but without a standby recipe to call my own, i consulted my guide for all things culinarial -google. and i’m not sure if you’ve googled vegetarian (clearly) recipes lately (and really, why haven’t you is the better question) but there are a lot of options out there, y’all! so i relied on the best method for weeding out ill-contenders -i judged the accompanying photographs. does your chili look non-chili-ish? well, no thank you kind sir/madam, i do NOT want to learn how to make your concoction.

i mean, they say you eat with your eyes first, right?

i also weeded out all of the recipes with “whole corn kernels” listed among their ingredients (because there may be a reason why your body doesn’t digest those…just sayin’) as those that required a “dutch oven” for their means of preparation.

i’m sorry, i’m not married yet, so i haven’t had the pleasure of registering for such frivolous kitchen items. but you know what will now be among the top contenders when that glorious day of wedding registry transpires? a DUTCH OVEN. and also a pannini maker. and maybe a waffle iron, too. because WHY NOT?

anyway, even with that weeding-out methodology, there were still quite a few chili recipes to choose from. but when i stumbled upon a listing for a 4-bean chili that utilized ONLY products from trader joe’s, i mean,

so after braving the crowds at my beloved encinitas location (i mean, really, did everyone in the coastal community decide that 1:30 p.m. would be a great time to stock up on holiday jo jos and artisan cheeses for the week?) and a supplemental stop at sprouts for some gluten-free, dairy-free cornbread mix (i’m not high maintenance, you’re high maintenance) i had gathered up the necessary victual vitals for operation chili (and special mission cornbread) to commence.

while my sous chef graciously chopped the onion (i cry enough on my own, thankyouverymuch), i diced the bell peppers and once the pot was heated to a sautee-worthy temperature, everyone (including all 4 varieties of beans) got added to the pool along with the tomatoes, spices, and broth.

while the chili pool party cooked on, i prepared the cornbread batter (being all healthy-like and substituting honey for sugar, oil for butter, and egg whites for eggs!), poured it into a pan, and sent it on its way in a 375* oven for 23 (not 24) minutes.

now, we may or may not have established myself as an impatient person. it’s true, there’s no real way around it. i try really really hard, but you know, i’m just like, hey, get here alreaday! be done already! you’re taking too long to finish your sentence, so i’ll interrupt you and finish it for you (i’m the WORST), so when my chili wasn’t thickening up to the previously advertised recipe photo standards (obviously my ruberic), i became a bit worried.

at first blush, it was basically soupy vegetables. which i mean, just doesn’t cut it when you have your sights at completing operation chili. i would be darned if my first chili-cooking experience wasn’t perfect.

did i mention that in addition to being impatient, i’m a perfectionist AND stubborn? right. awesome.

anywho, thank goodness for a resourceful sous chef who also employs google’s assistance from time to time, and who, manages to have this crazy innate knowledge of how to thicken chili.

turns out, it helps if you REMOVE THE LID from the pot to allow for the excess moisture to cook off (my b, my b) and also, maza is a fine substitute for flour when a gluten-free thickening agent is in need. a few more minutes on simmer sans topper and a few tablespoons of corn paste later, and y’all.

did i mention that my cornbread was basically foodnetwork magazine cover-worthy? i mean, i may have needed recruits for my chili-making, but that whole cornbread concocting was a successful solo mission thankyouverymuch.

maybe i should have served humble pie for dessert?

anyway, i think one of the neatest things about trying your hands at cooking -whether it be chili or something else delicious and bean-y, is that though a recipe is involved, unlike most things in life, it’s okay to stray from the rules every now and then. i followed the instructions exactly and yet, for some reason, our product did not mimic the one shown. so improvisation was needed. no cause for panic, rather, an opportunity to, well, as my sous chef so aptly said it, “an opportunity to make it your own.”

turns out, our own involves a little maza, a lot more salt and chili pepper and copious amounts of cumin, too.

try your hand at our adapted twenty-minute four-bean chili:
from: daily garnish

Instructions
In a Dutch oven or heavy-bottomed pot, saute the chopped onion in a little bit of olive oil. While the onion cooks, chop your peppers. To save time, I actually used a bag of frozen bell peppers (from Trader Joe’s) and just diced the frozen pieces. A big time saver on busy weeknights, and good for using in something soft like soup.

Add the peppers and continue to cook until thawed (if frozen) and browned.

Rinse and drain all the beans, and then add to the pot. Add two cans of tomatoes too – make sure you use fire roasted tomatoes with some sort of chili or heat. If you choose to sub in plain canned tomatoes, you’ll want to increase the amounts of spices and add a little extra heat (jalapeno or cayenne).

Add the spices, salt, and veggie broth and give everything a good stir. Turn the heat to medium and let the chili simmer. At this point the chili is pretty much ready to eat, although the longer you let it simmer, the better (an hour really deepens the flavor).

Another option is to throw all of these ingredients into a crock pot and let it cook all day long. It’s a very simple chili, but that’s the whole point. Something easy you can throw into a pot and then walk away – come back, and dinner is served! 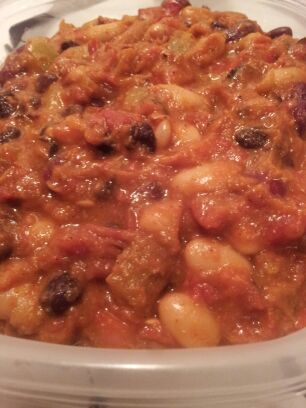