yes, i’ll quote it now and i’ll quote it forever (texas, forever), because everything about my beloved friday night lights television series is in my (clear) eyes, perfect.

ok, so maybe “perfect” is too strong of a sentiment, but let’s just say it comes pretty darn close to that.

much like my ability to relate almost any conversation and/or everyday occurrence to an episode of friends, coach taylor, tim riggins and panther (and then lion) football are always in the back of my mind when going about the happenings of my day. so any and all references to football and well, sports in general, can’t help but conjure up images of texas sunsets and the silhouette of eric taylor, clad in khaki shorts and oakley shades, emerging from the locker room following yet another inspirational speech. 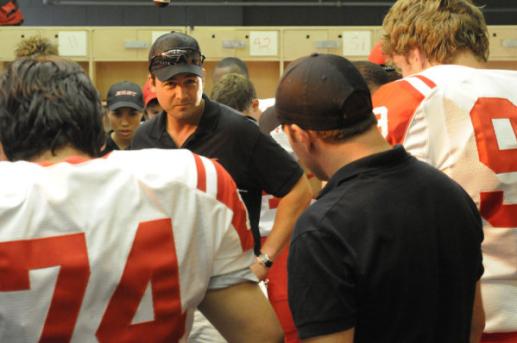 which leads me to my point (i always get there, it’s just usually arrived via the round-about-back-roads route), a while back i posted the following quote on my old blog home that i had stumbled upon during my daily perusing of some of my favorite tumblr sites. and while it was certainly poignant then, i can’t help but to think its relevance is even more suited for the my most current life’s stage.

“one reason we struggle with insecurity: we’re comparing our behind the scenes to everyone else’s highlight reel.” ~steve furtick

perhaps now you can see how i am instantly reminded of football under the lights of friday night? highlight reel? anyone? bueller? ok, so maybe it’s a bit of a stretch, but whenever i hear those words, i can’t help but think of sports and the film strips teams (and individual players, too) put together to showcase their most prized games, plays and moments from a particular season. the best of the best. their most laudable performances. the highlights.

and these films are paraded around to a bevy of audiences -rival teams, sports agents, the media at large, you, while sitting in the comfort of your lay-z-boy watching sportscenter on a sunday afternoon. and as you observe the slide show of heart-stopping moments, miraculous athletic fetes, you can’t help but be wowed. because regardless of your knowledge and/or love for sports, some instances are just too awe-inspiring to negate. and that’s exactly what a highlight reel is meant to do -to showcase only the best.

absent from these films are the fumbled balls, the overthrown passes, the missed catches and field goals; the strikeouts (so i included some baseball references, too). i suppose those are reserved only for the blooper reel. because let’s be honest, while those items can oftentimes usher in a good chuckle or two, no one wants to see those. we are a nation of winners. achievement driven; constantly seeking the approval of our peers. we don’t want our mistakes strewn about for the world to see, we’d rather they only have access to our proudest times; the moments in which our best foot was certainly put forward.

but i’m sorry, the last time i checked, that’s not real life. real life takes the good with the bad. it displays our triumphs, but also showcases our failures. sure, facebook statuses and twitter updates may preach otherwise, but no one’s life is that perfect all the time. one of my favorite bloggers recently wrote a satirical post (take it with a grain of salt, sometimes he uses choice language so sorry in advance) about what it might be like if people utilized social media to express their actual thoughts and feelings (as opposed to putting on a joyous front that their life is all rainbows and butterflies 24/7). the result is rather both comical and well, depressing. but no less authentic. because that’s life. it’s beautiful and ugly and awesome all at the same time.

so there in lies the disconnect. when we are more than well aware that every team has both a highlight reel in addition to a tape displaying some of the not so glamorous behind-the-scenes moments, why do we continually choose to compare our latter with their former? our bloopers to their top ten plays?

heck, why do we feel the need to compare any of it at all?

and maybe the person who needs to take this advice most closely to heart is the one i face everyday in the mirror.

last night, in a small room at north coast calvary chapel, i learned the identity of the woman who would become my mentor for the next six months. and in case you were wondering, she’s awesome (duh). and as we chatted and became better acquainted with each other, she concluded our time together with a comment that couldn’t help but to bring tears to my eyes (see! i knew there would be crying!). she looked me square in my peepers and softly said, “the most important thing i can emphasize to you during our journey together is this: stop comparing yourself to others. God created you to be you -a unique and beautiful creation; you are exactly who you are supposed to be. (that’s not verbatim, but i was crying, remember? things got a little fuzzy after that).” it was as if she had crawled inside my head, read over my deepest insecurities and negated them in one fail swoop.

for if i had to define my greatest flaw (well, there are many in fact, but this one ranks pretty darn high), it would be self-comparison. the constant need to measure up my my looks, my christian walk, my smarts, my experiences, my love life, my finances, my life as a whole with those around me -friends and strangers alike. all the while forgetting that i’m doing exactly what steve furtick said above, i’m comparing my behind-the-scenes with everyone else’s highlight reel. i’m taking my tarnished metals and laying them next to their finest pearls. and in turn, i’m only setting myself up for failure.

so i suppose the first step to recovery is admitting you have a problem, right?

hi, i’m shawna and i am a constant compare-er (hi, shawna). i am guilty of perpetually feeling inadequate in almost every aspect of my life. most notably (if we’re really being honest here) when it comes to my physical appearance. and maybe it took hearing those words, said out loud, to my face, from a lady i only very recently met, for it to finally set in. i can be nothing more than the first-rate version of myself. no one else, just me.

and sure, i come with baggage (a whole louis vuitton set! if i’m going to have baggage, at least it’ll be fancy) and scars (both physical and emotional), but i also bring forth enough sass to sink a ship, a pretty cute nose and a baby face that often gets her carded for rated-r movies (apparently i’ll thank my genes later). i have some behind the scenes footage that i would rather y’all don’t see, but i realize that those moments are just par for the course. the highlight reel is there, too. it’s all there. because like i said, that’s life. the good and the bad. the cheers and the tears. it’s beautiful and ugly and awesome.

and we can only learn to enjoy it –all of it– when we finally stop comparing our behind the scenes to everyone else’s highlight reel. and i’m working on it.