chapter one. the flight. because when you spend 15 hours on an aircraft, it deserves its own post entirely. duh.

but let’s back up two point five, shall we? mad love, props, and thank yous to my glorious parents who chose to spent their friday night carting my booty up the 405 to LAX before my red eye to sydney. not only did i make them leave obnoxiously early (so as to avoid the traffic we inevitably ended up in because that’s what happens when you overplan, God tests your patience. and because it’s the 405 and it’s the worst), but i also subjected them to a dinner at whole foods (because when you’re asked what you’d like for your last american meal, you obviously choose an overpriced salad bar). they stayed with me long enough to help me check-in and check my bag and, well, to snap this photo of course: 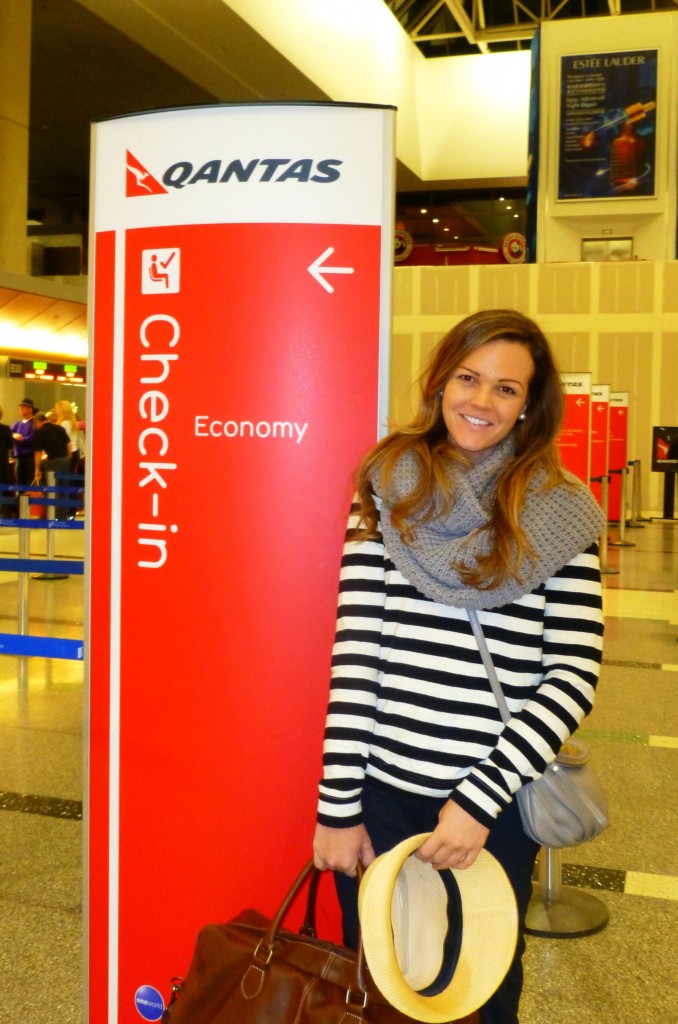 i’m cute, right? what this photo fails to capture is the huge knot in my stomach that had formed somewhere between sepulveda and entering tom bradley international. i was nervous with a capital N. not the kind of nervous where you want to run and hide under the table or throw up (okay, maybe a little like the kind where you want to throw up) but more like the good kind of nerves where the butterflies jump around on trampolines inside your stomach and you’re just really excited to get this thing started already.

so with my fedora and my carry-on and my gray scarf which in this photo now kind of looks like it’s attacking my neck, and yes, those nerves, i hugged them each goodbye, jumped into the security line, and tried not to get yelled at for having over the 3 oz. limit for my carry-on toiletries (success!). once i made it past TSA, i entered into a world of bright lights, overpriced name brands, and duty free shopping. have y’all been to the tom bradley terminal before? they have a FRED SEGAL. i mean, of course, it is la.

i grabbed a water and plopped down in front of my gate. i was a good two and a half hours early for my flight (natch) but i figured i’d kill time reading my nook, sending out last minute “oh my gosh this is really happening” texts, and obviously, checking instagram. what i didn’t imagine doing was making friends with one of my fellow passengers who was on his way to perth for some biological study or something that sounded way too sciencey for me. we chatted for a good hour or so. and no, he wasn’t australian and also, married. BUT i did also meet an australian high school basketball team who must have been playing some exhibition games in the states and one of them gifted me a kangaroo boxing pen before boarding his flight. like it was a regular pen but on the other end there was a kangaroo that you could make box by pushing a lever. so basically if the pre-flight events were harbingers of what was to come, this was destined to be the best trip ever.

when it was finally time for me to board, i queued up (<– that’s just some australian vocab i decided to bring back with me, you’re welcome) in my appropriate spot only to learn later that i had been given a seat upgrade (lemme lemme upgrade ya). it was still a window seat (that meant climbing over TWO people to make it to the lavatories) but i was a good twenty rows closer to the front so i felt pretty great about it. i ended up being sat next to a nice but very coughy/sniffley/pretty much very sicky colombian man (how do you politely shower yourself in purell without making him feel badly? answer: you don’t and pray that his germies stay on the middle seat) and to the left of him was a nice australian man heading back home to melbourne. i’m not gonna lie, aside from the incessant coughing from mr. colombian, they were pretty good row companions. and they didn’t even make me climb over them to get to the toilets, they happily got out of their seats to let me out. such gentlemen.

now M had told me about how accommodating qantas was but it wasn’t until i experienced their service first-hand that i was able to believe him. first of all, all of the flight attendants are really nice. like really nice. and they all have accents which also makes them just really fun to listen to. i had requested vegetarian meals just to be safe and the awesome thing about that is that when meal service rolls around, you’re the first to be served. honestly a good twenty minutes before the rest of the plane. which was slightly awkward because it kind of makes you feel rude for eating before everyone else has been served but if you can get over that, it’s mostly just awesome. another wonderful thing about qantas is that they have movies on demand for you to watch on your personal screen on the back of the seat in front of you. and i’m not just talking movies from three decades ago (though they did have a section called “encore” which featured some oldies but goodies), i’m talking like recently released oscar nominated films. can i get an amen?

i started with silver linings playbook (you go jennifer), followed up with blue jasmine (cate blanchett is perfect), rounded out the top three with up in the air (so good and appropriate and also, hi clooney)  and finished strong with my umpteenth viewing of bridesmaids because of course (i found a whole new appreciation for the entire plane scene. if only there had been a flight attendant named steve (or “stove”) on my flight…). it seriously helped pass the time. as did that little nap and the copious amounts of ankle rolling and foot tapping in order to get my swollen cankles under control (and my feet fitting back into my shoes).

finally, after two meals, dozens of no jet lag pills, a few trips to the bathroom, those four movies and a few mini conversations with my two row mates, and after 15 hours in the friendly skies and crossing umpteen time zones, i heard the most magical words you can hear on a flight: “flight attendants, please prepare for landing.” and just like that, the faint views of the sydney skyline came into view outside my tiny airplane window. “sdikfwerpowuegoidugwetgofuiwepof” i thought to myself. i made it. i’m here. in australia. after five months of planning (err, M planned, i just purchased a ticket) and anticipating and passport-renewing and travel toiletry purchasing, i was about to embark on the trip of a lifetime. i just needed to make it through customs. and pray that my bag had also successfully made it to sydney as well.

as you might assume, not only was my bag one of the first onto the conveyor belt, but australian officials decided it was a-okay for me to come hang out for 15 days. so i made my way out of the terminal and to the front of the airport where i instantly began sweating profusely. part of me thinks it was the fact that it was 80 degrees outside with some ungodly percentage of humidity and i was dressed for california winter (which, let’s be honest, is about the same, just without the humidity), but the other part of me thinks it was the nerves finally manifesting themselves, too. noooooo i thought, my hair looks so good right now, sweating is only going to make it start frizzing. and while i knew it was next to impossible to appear “refreshed” with 15 hours of flight time on me, i was trying to at least look halfway presentable for M. and let’s be honest, for the people of australia in general.

a trip to the restroom to remove my scarf and splash some cool water on my face worked wonders and by the time i spotted M in the sea of greeters eagerly awaiting the arrival of their weary travelers, i felt like i could breathe again. we piled into a taxi and headed toward bondi. and as i looked across the backseat at M as the streets of sydney whizzed by outside the car windows, i thought to myself, “welp, here we go!”