i’m a creature of habit. i find something i like and i stick with it.

take for instance my affinity for horizontal stripes. or polka dots. or reality shows. or, well, you get the idea.

some may call it loyal. others, obsessive.

perhaps the arena where i’m the worst [repeat] offender is with restaurants. i encounter a place whose food makes me want to kiss it on the mouth and then proceed to eat there any and every chance i get.

right now i’ve been rotating between urban plates and edamami in carmel valley. to put it into terms that you might understand, both places have all but become my trader joe’s.

as was more than evident last night when i walked into edamami for the second time, yes, you read that correctly, second time in three days, to meet my girlfriend (hi L!) for a late night sushi sesh. as soon as he caught sight of my flushed post-pure barre face, brian, the server who had not only assisted K and i our on tuesday night dinner date, but who has also served me and [insert girlfriend of choice here] many a time before, was quick to point out the lack of time that had transpired since our last meeting. “we’ve got to stop meeting like this!” he quipped. jokes, guys, brian’s got jokes.

and then at least two other employees proceeded to awkwardly comment on the frequency of my visits to their establishment. and in no less than five minutes time from my arrival did the entire restaurant know that i was the girl who was obviously nursing a pretty severe sushi addiction.

i mean, i can’t even argue that. guilty as charged.

anyway, L and i proceeded to have a lovely meal, and in keeping with my true “if it ain’t broke, don’t fix it” attitude, i even suggested we order the same four rolls that K and i had devoured just two days prior. and yes, brian pointed that out, too.

thanks for keeping score, bri.

i mean, part of me feels like i should be embarrassed that the edamami servers have become quite familiar with the eating habits of the redhead in the lululemon crops, striped j.crew sweatshirt, and silver sparkle toms. but then the part of me that thinks sushi is delicious and that knows edamami offers 50% off happy hour ALL THE LIVELONG DAY tells the embarrassed part to get over it.

and then i text a girlfriend who i haven’t seen in a while and suggest that we do sushi.

and i tell brian and the gang to keep my seat warm because chances are i’ll see them next week, and they should try not to act so surprised this time. 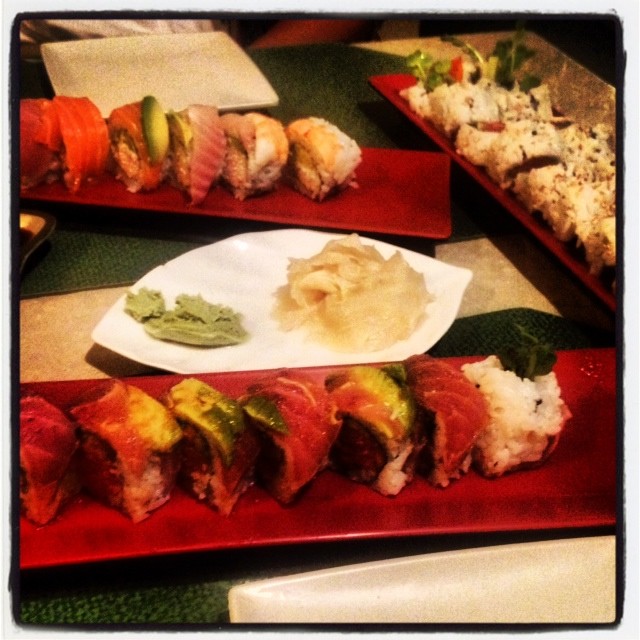