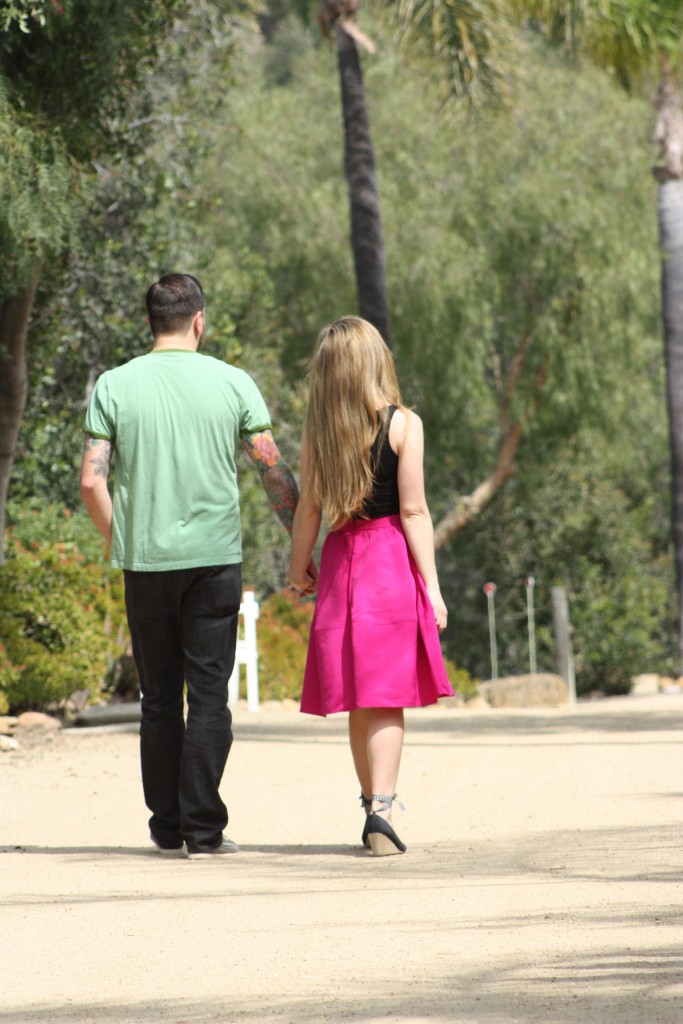 when i was in my last year of high school, our bible teacher (i went to a private christian school) told us to start a list of everything we hoped to find in a future mate -“and make it specific,” he said. he later went on to tell us that he had done the same when he hadn’t been much older than us (17 & 18 years old) and that in the Lord’s timing, He had brought to our teacher, the woman of which he had described in his hypothetical list.

needless to say, i started writing.

in the end, i came up with 42 things. yes, forty-two. clearly, i wanted to ensure God knew exactly what i wanted in the future mr. shawna. i covered the biggies -“must love his family,” “must want kids (preferably three boys -which is what i wanted at the time),” “must be ambitious and driven,” as well as the not-as-common requests, “must drive a truck,” “must love disneyland,” “must hold my hand in public.” it was a hodgepodge of seriousness and frivolity -the kind of combination that you’d expect out of a high school senior.

over the last decade, the list has evolved; a result of the passage of time and (thankfully) maturity and just overall life experience. certain items have shifted in priority, and some, well, some were deleted all together.

and then i met S.

and of the 42 original qualities i scribbled down that day in 2003, if he doesn’t possess all 42, he’s got at least 41.9. it’s mind-boggling really. that the things i dreamt of in a potential mate have somehow manifested themselves now twelve years later in this man of which i can no longer imagine my life without.

what has struck me almost just as much are the qualities that S possess that i never knew i wanted and/or needed in my counterpart. the items that never made it on the list at all. his communication skills, patience, unconditional love, forgiveness. heavy-hitting concepts that i probably wasn’t thinking about at age 18. these are the adjectives i would add if i composed a list today. because these are the attributes i have come to learn are the key ingredients for a successful relationship.

yes, it is amazing that S just happens to drive a truck and knows how to play the guitar (and is learning the banjo) and is totally okay with a little (appropriate) PDA. but again, aside from his near perfect “score” against my original list of 42 items is the fact that he brings to the table characteristics that i would have never considered needing, but now know i could never function successfully without.

and i think that’s the magic of the Lord’s timing and providence. He clearly knew that those 42 attributes weren’t quite enough. He knew that i would need a patient man, to let me be crazy and emotional and at times a little too much to handle, who would remain steadfast and unwavering, who would be slow to speak and quick to listen, and who would simply hold me and let me cry if that’s what was needed. He knew i needed a good communicator with whom i could be honest and vulnerable. a man who wasn’t afraid to tell me how he was feeling, profess his love, affirm his love, and demonstrate his love in both words and action. a man who would be willing to settle a dispute right then and there, before tempers rose and angst festered. a man who would consider all sides of the situation, validate feelings, and who would work as a team to restore peace again. He knew i would need a man whose love wasn’t based on a fleeting feeling or a season of convenience. a man who would rather choose me daily. over and over again. whose 2,000th “i love you” meant just as much as his first. and perhaps most importantly of all, He knew i needed a man who would realize my short-comings and in making said realization, would be quick to forgive when my flawed humanity inevitably shined through.

the unexpected result of being a relationship with a man who possesses the aforementioned characteristics is how much his attributes influence my own. and furthermore, how the relationships in other areas of my life are positively affected as a result.

for example, the way in which i approach conflict has changed drastically since S arrived. early on in our relationship we established a “speak up immediately” policy. as soon as something bothered us, we’d express it right away rather than bury it deep down inside where it could grow and fester. as a confrontation-phobe for so many years, i was apprehensive at first. but in seeing how well we worked through the issue (which most often could be attributed to h.a.l.t) -expressing, listening, and validating each other’s emotions and feelings, i learned how effective and efficient it could be. we nipped the tiff in the bud and went along our business with a refreshed outlook and a strengthened bond. we had created this safe zone where freedom of expression was looked upon favorably. and once the guilt of disrupting the status quo was eradicated, a wall came down, and we were allowed to fully embrace who we were -as flawed individuals, but also, as a committed couple navigating how to work as one.

as a result, i’ve noticed how i’m less apt to flee from confrontation in other arenas of my life. i’ve learned that there’s nothing wrong with voicing your opinion, as long as you’re respectful of the person’s feelings on the other side. it’s a principle i can whole-heartedly attribute to S’s presence in my life. and it has made me better.

he makes me better.

sometimes, it’s hard to know what you want when you don’t know what you’re missing. the qualities that S possesses above and beyond the original 42 were attributes i never even considered. then again, i was only 18 and as green as an unripened banana.

still, i think S’s patience and humility, willingness to communicate and be my -to quote one of the best wedding vows i’ve heard in a while -“first-round draft pick” teammate were qualities the Lord was simply saving for me until i was ready to receive them. as i have said before, if S had arrived even a month before he did, i might not have been prepared for all he had in store. but then something shifted. and on july 3rd, when he showed up with all 42 items fulfilled, plus a few more for extra credit, i finally realized why our teacher had urged us to put our dreams in writing a dozen years before.