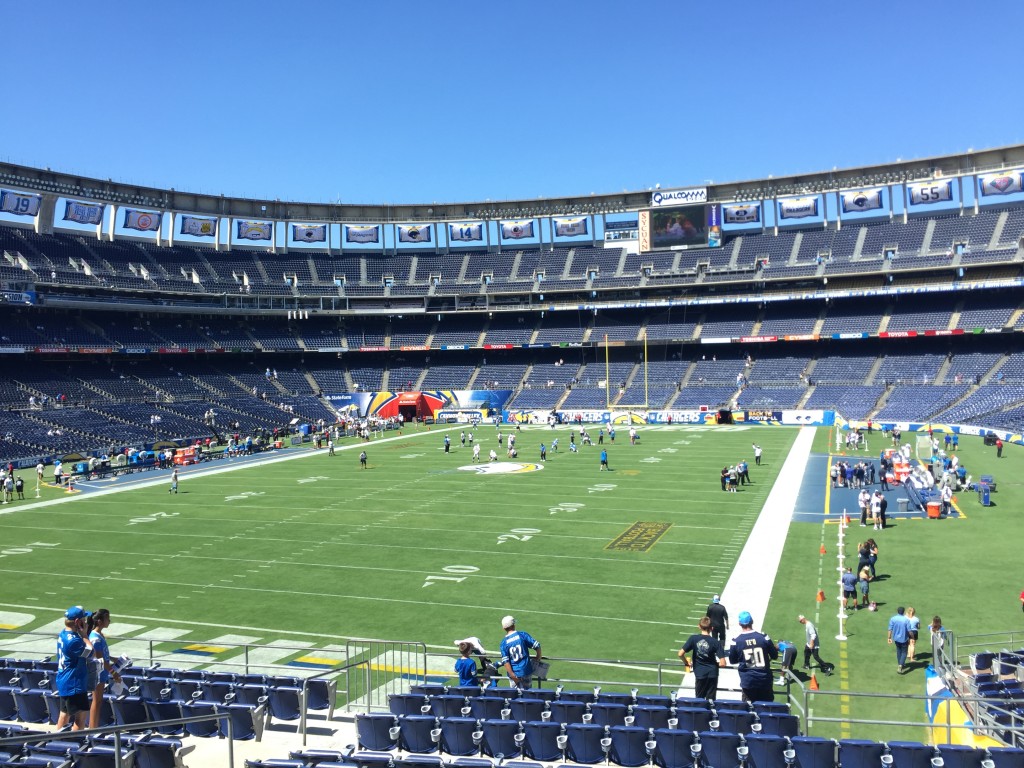 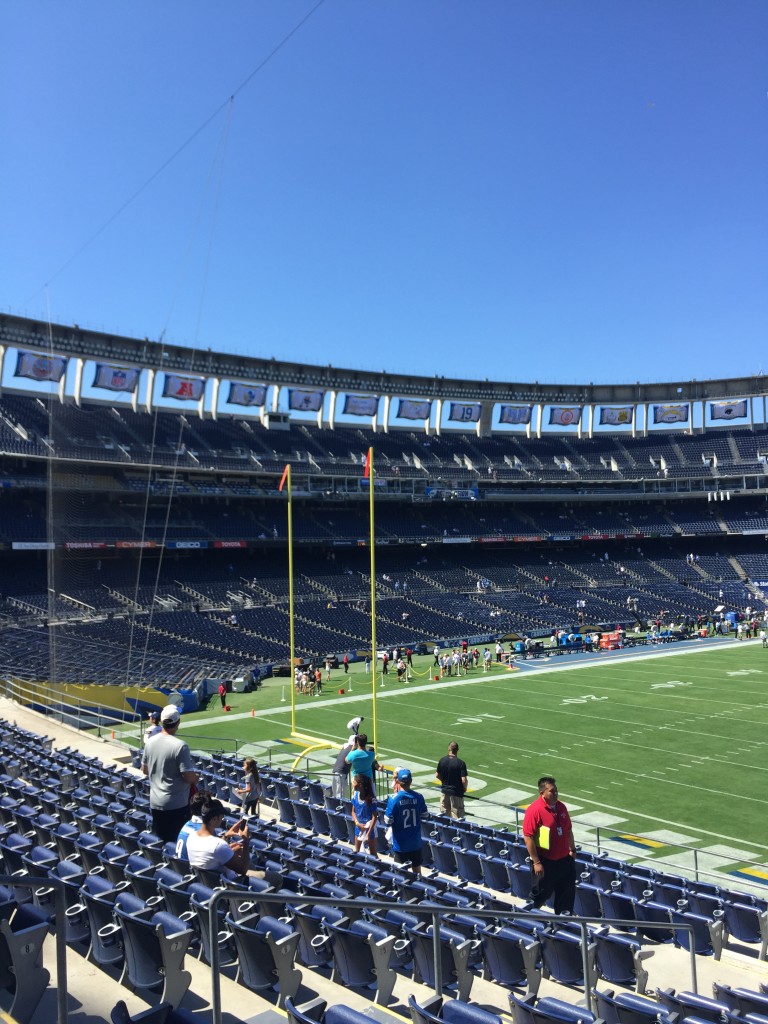 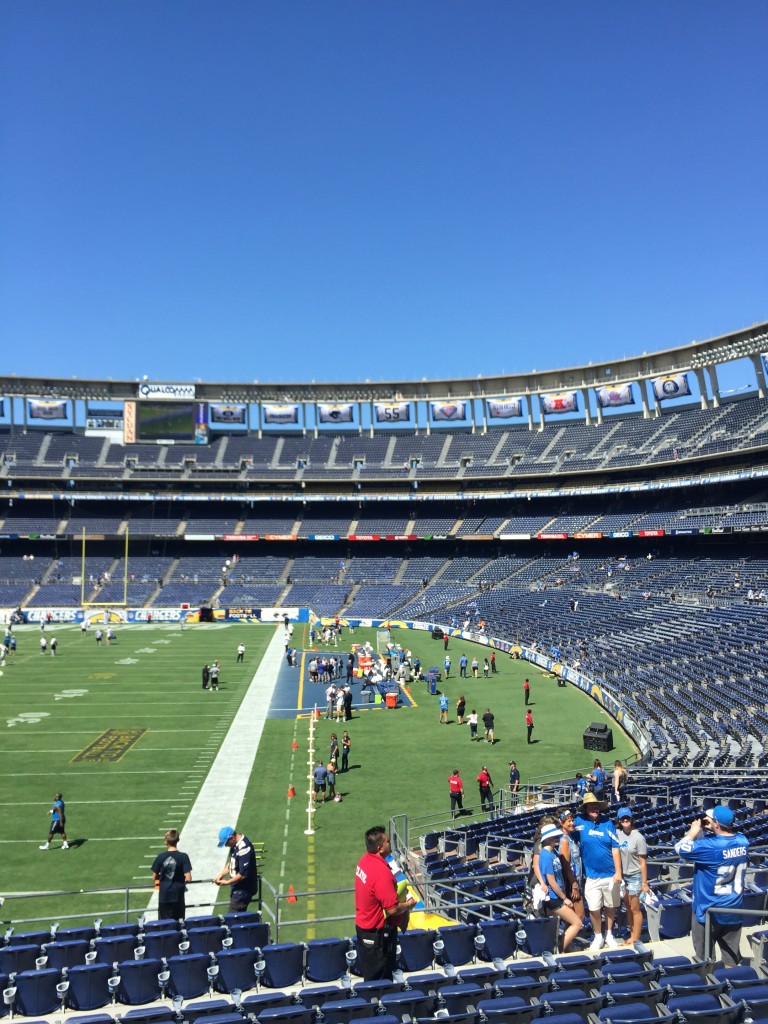 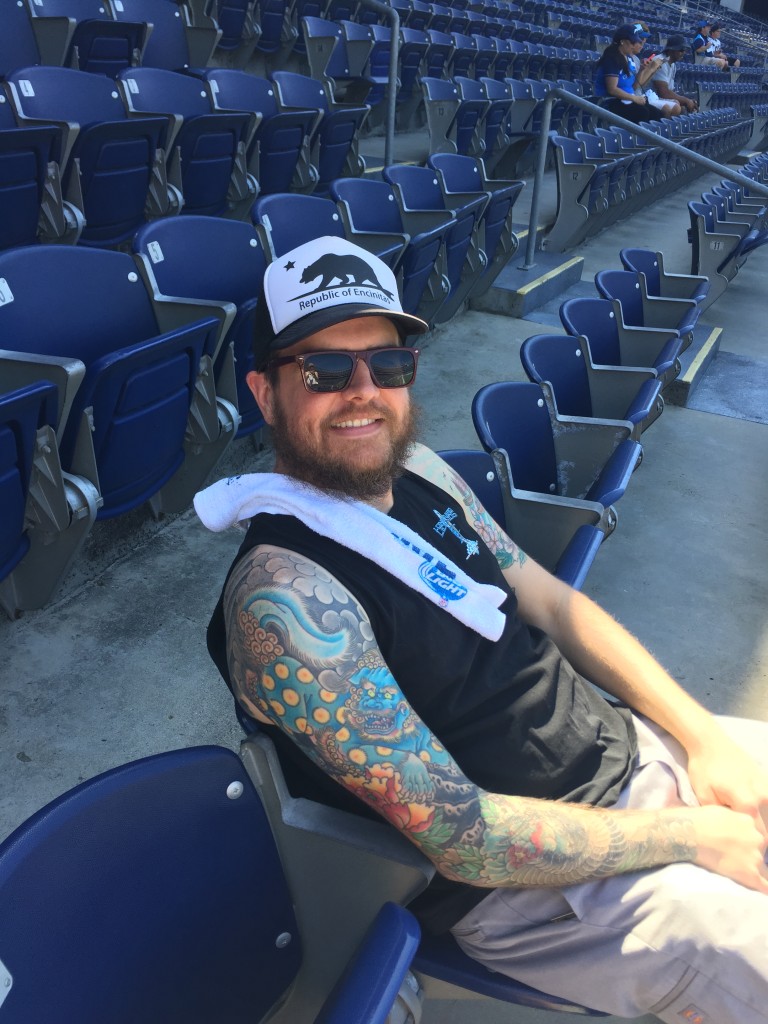 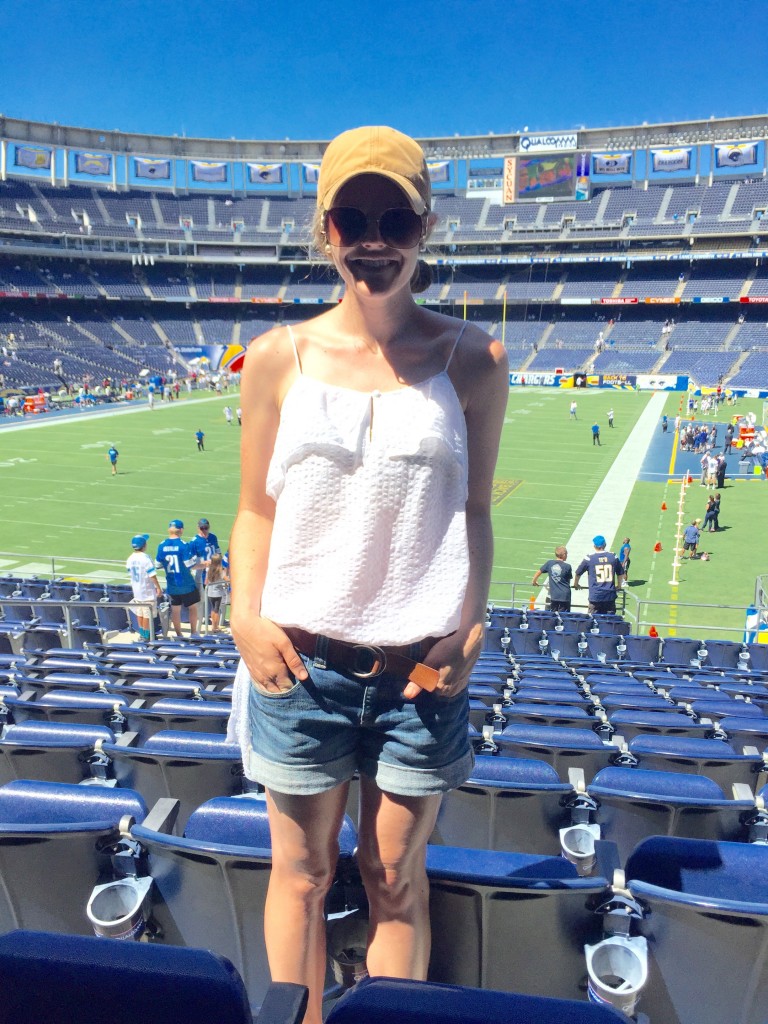 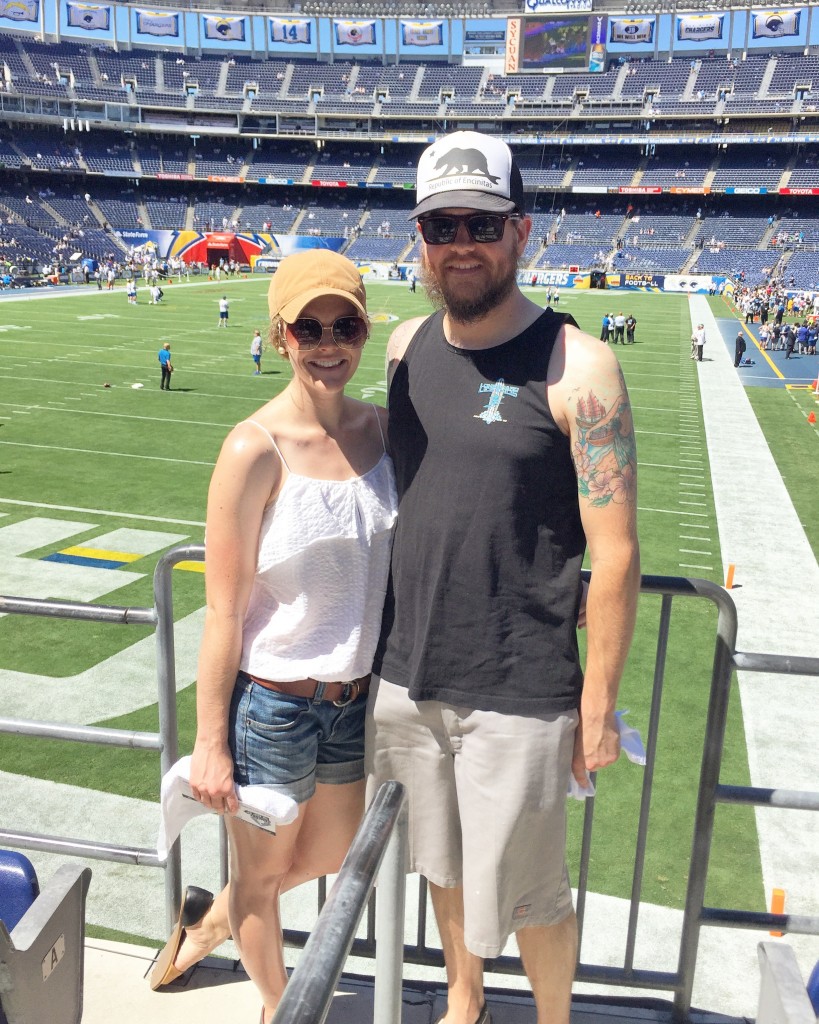 as i mentioned in friday’s post, S and i had tickets to yesterday’s chargers’ season opener at the Q. despite it being about 847 degrees (give or take), we were intent on doing our part to kick-off the 2015 football season. it was suns out, guns out in our tanks and shorts and to prevent either of us coming home like a lobster, we coated ourselves with a thin layer of spf 50. twice.

to avoid the madness of opening day, we left the house early and arrived to the stadium a hair past eleven. thankfully, the gifted tickets also included a parking pass in a sectioned-off lot located directly behind gate 2. patrons weren’t allowed in until 11:35, so to kill time S and i walked the perimeter of the stadium, taking in the sights (so many lions fans!), smells (mmm, grilled meat), and sounds (pitbull on repeat) of chargers sunday. finally, when i was sure i had already sweat off the first layer of sunscreen, the gates opened and we were released inside the hallowed halls of qualcomm stadium.

our seats were in the plaza section 55 (junior seau’s number), the area just beyond the end zone below the jumbo tron. as we found our way down the stairs toward row 11, i kept my fingers crossed that by some miracle, we had scored two seats in shade of the overhang of the section above. no such luck. though they offered no reprieve from the summer sun, our seats still gave us an incredible view of the field. S and i relished in the time we had prior to kick-off and the leg room we would soon lose. i also relished in the fact that my shirt was still 80% dry, a percentage that would quickly diminish by half time.

we snapped photos, watched both teams warm up, grabbed a couple beverages, and even spotted mario lopez (aka a.c. slater), who we believed to be covering the game for extra tv. as the 1:05 p.m. start time approached, there were a few presentations -including the unveiling of a new flag honoring the late junior seau’s entrance into the hall of fame this year, a speech by his daughter, sydney, the presentation of the american flag by our military, and of course, the national anthem (sung very beautifully, btw).

finally, it was game time! in a matter of moments, it seemed, the stadium had filled. unbeknownst to S or i, the tickets had advised fans to wear white. subconsciously, i had still gotten the memo (truthfully, white seemed like the best option in the heat), S, however, did not. to supplement the appearance of a white-out effect from overhead, early entrants into the game had received a novelty towel not much bigger than a loaf of bread. forget a rally towel, this thing served a much greater purpose as an additional shield from the sun. i alternated between laying it across my bare knees/upper thighs and draping it around my neck. at one point, S wondered if the men weaving between rows selling cold beverages and ice cream would allow us to dip it in their melted ice water, but we never got the nerve up to ask. instead, we simply just sat and simmered in our own “glow,” relishing in the occasional and very welcomed breeze that passed through the stadium.

about halfway through the first quarter, two overzealous charger fans seated directly behind us managed to spill their cup of draft beer down my back during an outburst of celebration after a notable play. while a part of me was a little irked at the fact that i would smell like a frat party for the duration of the game, another part of me found the oversight a little refreshing.

until they did it a second time.

thankfully, they were very apologetic after both instances and even offered up their white towels to clean up the mess. perhaps it was for that reason the towels were handed out in the first place?

if you were watching the game at home or at a local bar (with sweet, sweet central air conditioning), you know the chargers had a bit of a rough start. i think S and i were a couple of bad luck charms because as soon as we left at half time (we just couldn’t take the heat anymore, literally), they seemed to channel their inner stellas and get their groove back. they ended up scoring 30 points(!) in the second half to take the W and start their season at 1-0 (final score 33-28).

at the end of the day, there really is no substitute for seeing a professional football game live. so despite sweating out every last toxin in our bodies, S and i remained grateful for the opportunity to attend the first game of the chargers’ season. though it would have been exciting to feel the electricity in the stadium once the team began their charge toward victory (pun intended), it was just as nice watching them win from the comfort of my condo with the air unit blasting, snack in hand.

gosh, i’m so happy football is back.