so you may or may not have heard there was a little football game on sunday. and being a good, honest american and lover of all things where men don spandexy pants (no but seriously), i was glued to the television set from the hours of 3:30 p.m.-6:30 p.m. give or take a minute or two for bathroom breaks and snacks. and regardless of the fact that i had remained pretty switzerland (that’s neutral to those who may have not paid attention during history class) about the match-up, i was quite pleased with the outcome. if anything because a) it’s kind of fun to see tom brady squirm and b) eli always looks like he’s about to cry, so i can only imagine how much consoling he would have needed if the gmen hadn’t pulled it off (look at me, i almost sound like i know what i’m talking about, right?).

anyway, all this is to say that yes, i watched the 46th meeting of the afc and nfc league champions. my thoughts (in a stream of consciousness grouping of words and phrases):

and while a majority of my sunday was certainly occupied with football-watching and guacamole-consuming, it was also for pure barre-ing, church-going, giant flower head-band wearing, swamis-coastline photo-taking (such a gorgeous day!) and very importantly, tj maxxinista-becoming.

allow me to explain.

my mother and i share a lot of things: clothing, dna, our sense of humor, most of our facial features, an affinity for peanut butter, you know, the usual stuff. and while i could basically be deduced to the mini version of her (actually, i’m taller, so she’s the mini version of me, but that doesn’t really help me prove my point) in most arenas, there are certain titles that only she can claim. like her mad skills at finding gems at our local tj maxx. sure, i may score big in the nordy’s rack shoe department every once in a blue moon, but what this woman manages to discover amidst the crowded racks of the discount department store is nothing short of amazing. and on sunday afternoon, with a few extra moments before the big event, i accompanied my sensei for a crash-course in truly embracing my inner maxxinista.

and what i could only conclude after our almost hour-long stint inside that store (mostly in the shoe department) was this: it basically boils down to two things: patience and timing. you can’t expect to make off with some diamonds if you’re not willing to search amongst the rough. and that, my friends, takes patience. patience to painstakingly peruse through shelf after shelf, rack after rack. it’s not the kind of store that one can simply “run into” and expect big results. if it were that, it would be called j.crew or anthropologie (at least for me). rather, it is a place where one must be willing to put in the time in order to reap fruitful results. but in addition to a willingness to endure, there is also the added component of timing. sometimes, no matter how many spare minutes you have on a weekend afternoon to spend scouring a bevy of last season’s designer jeans and knit tops, the gems you hoped to uncover simply don’t exist. it’s not that your desire to shop isn’t there, it’s that the you’ve chosen to enter through those double doors at an inopportune time.

but sometimes, timing and patience take a cue from peanut butter & jelly and become the most fabulous of pairings. and for a moment, they find synocracy. and let me tell you, when this happens at tj maxx, it is a very good day. as was sunday, when these little babies found their way home with me. 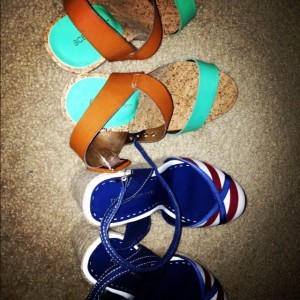 but wardrobe win aside, i can’t help but think that the lessons i learned from my first successful maxxinista experience can be employed in life beyond the confines of this retail chain.

patience is a virtue and timing is everything. and every time i look down at my tootsies while wearing one of these pairs of shoes, i’ll be reminded of how true these lessons are.

and to think, i thought sunday was merely about bean dip and overrated commercials. life lessons can certainly be learned on a day dedicated to football.