so just because i’ve gotten pretty good at cultivating my “i am independent woman, hear me roar” persona lately (with you know, discarding dead lizards and stuff), doesn’t mean i don’t need a helping hand (or two) at times. and while my stubbornness often lends itself to a few too many “nevermind, i’ll just do it myself” moments, there are certain occasions, like maybe sunday morning (just throwing it out there), where i should have simply opted for assistance…the first time around.

i was recently gifted a queen-sized air mattress. i know, score, right? in all honesty, the gift-giver knows of my affinity for hosting the occasional house guest and well simply wanted to ensure that said house guests were getting a decent night’s sleep (because i realize that while my couch boasts ikea-origins, it is by no means the  posturepedic poster-child). so to all of you house guests who have visited me prior to my newest inflatable furniture addition, please come back, i have a velvet-topped (only the best for y’all) air mattress waiting for you!

anyway, seeing as i have not housed any temporary residents of late, the mattress has remained in its box since its receipt date (only like a month or so). but when the desire to turn my living room into a makeshift movie theatre presented itself on saturday evening, i couldn’t help but to think that this was the perfect opportunity to take that air bed out for a spin. and by “spin,” i simply mean that we inflated it (which in and of itself was a bit of a challenge, apparently book smarts i’ve got covered, but street smarts might be another story), and ended up using as a glorified automan  (in case you were thinking “spin” meant something different..).

now if you haven’t been to my house (again, i’m pretty liberal with handing out my contact information, but i’ve managed to refrain from doling out my address on too often an occasion), then i it’s probably because i’m always wary about making anyone make the trek out to see my humble abode. but if someday you do come to visit (i’ll be sure to have something baked and delicious waiting for you), you’ll see that my living room houses three couches (two, simply for decoration and the product of another gifting endeavor, this time from my parents), which flank a small coffee table/chest-like piece of furniture in the center of the room. this little gem, the result of a successful mission to home goods some five years back, fulfills a schmmorgasborg of roles -foot rest, displayer of candles, coasters, and decorative lemon displays, remote holder, and within its drawers?  back-dated instyle weddings (nothing to see here, just keep moving), real simple and foodnetwork magazines. so you know, it’s light as a feather.

this might be the longest route i have taken to get to a point, but i assure you i have one.

anywho, in order to accommodate the queen-sized air mattress in the center of the living room so as to enhance our movie-watching experience, we had to move the aforementioned “light as a feather” (see also, the opposite of this) coffee table/chest-like piece of furniture into the other room, which, even with four hands, turned out to be both a precarious and heavy a task. i mean, i suppose we could have taken off the five candles, four coasters, lemon display rot-iron piece, and i don’t know, our FULL WATER GLASSES before we moved it, but i mean, where is the responsibility in that? and despite a minor scare, we managed to successfully transport the chest from the living room into the adjacent (and vacant) room (the room i lovingly refer to as “the dance party room” for well, obvious reasons) without so much as a drop spilling from either of those plastic glasses.

[and because you might be like me and be super curious (see also, nosey, KIDDING) by nature and wonder what movie it is we decided to watch…it was safe house because that’s the best redbox could provide us with. and it wasn’t terrible, but really, when there are few scenes of shirtless ryan reynolds, how can it be all bad?]

anyway, the rest of the evening’s happenings aren’t important, the real purpose of this post is to  tell you what happened the morning after -when i was alone once more, with a half-put together living room, and no longer an extra set of hands.

yes, yes, this is where i had another case of “i am independent woman, hear me roar” syndrome. i mean, who knew when another person would be just passing by to say hello next? i couldn’t just leave my living room in shambles. how would i watch gossip girl on monday evening? precisely.

so with sleep still in my eyes and in my over-sized abercrombie & fitch sweats, i plugged in the air pump, turned the setting to “deflate” (as opposed to “inflate” which is, you know, what i did on try one and two) and got to business. it is amazing how quickly those little buggers work because in no more than five minutes or so, the mattress was back doing its best pancake impression (that’s flat, in overly-creative terms). and i proceeded to fold it back up (similar to how you roll a sleeping bag) only to find that no matter how good your rolling skills may be (and i’ve had plenty of practice with those years as a girlscout), the rolled item (whether it be a sleeping bag, or an air mattress) never, i repeat NEVER fits back in the bag the way it did upon first opening the package. so you know, i put some elbow grease into it, used my knee as leverage, and jammed that puppy back in its nylon bag faster than you can shake a lamb’s tail (which is pretty darn fast).

and with the room vacant once again, i was half-way finished with operation return shawna’s living room to its original state. now to return the coffee table/chest-like piece of furniture (there has to be a shorter term for that). so despite my willing it to become lighter and more suitably equipped for a single person to carry it overnight, the chest remained as it was eight hours prior -heavy and awkwardly long to prevent making it a single-person-moving endeavor.

now it’s important to note that i have hard wood flooring. no, not because i want you to be impressed with me because i have hard wood flooring, but because hard wood flooring would prevent me from performing any sort of dragging maneuvers to return my coffee table to its original spot in the center of the room. anyway, without an extra pair of hands to lift the darn thing, and without the ability to drag the darn thing, too, i resorted to a little ingenuity. i would pick it up on two legs then sort of shimmy it along the area rug using the two grounded legs (stopping occasionally to gingerly pull it over the hard wood), and eventually after enough lifting and shimmying, it would finally be exactly where i needed it to be. great. okay shawna, let’s do this.

i picked it up and began my lifting/shimmying/avoiding hard wood-scratching system. and i must admit, at first blush, it seemed to be working. see? who needs those extra pair of hands? like i said, i am independent woman, hear me roar (and move furniture). all was fine and dandy and i was about 2/3 of the way to the desired spot when an overly aggressive lift resulted in an imbalanced weight distribution of the previously mentioned knickknacks (because no, much like the night before, i did not have the forethought (and was probably just too lazy) to remove said items prior to moving the piece of furniture on the whole) and then, everything went into slow motion. i watched in horror as not one, not two, but three glass figurines (two candles/candle holders and one jar filled with seashells (my condo has a beachy themed decor) slid right off of the wood and onto the floor, where they all met an untimely, and extremely messy death.

[i may or may not let out a few choice words. i know, i’m sorry]

and i shook my head as i carefully picked up the shards of glass and disposed of them in the trash bag i had pulled from the kitchen. miss stubborn/i can do it myself was certainly having a big slice of humble pie now, wasn’t she?

and after collecting the pieces of wax from the broken candles and a few dozen seashells, i turned my attention to the third element (in keeping with the beach theme) -SAND. yes, that’s right, one of the glass containers had housed three little votives nestled in beach sand. i mean, precious, when used for a centerpiece at a beachside wedding or baby shower, but the opposite of precious when said contents are in a pile on your area rug and any attempts to collect them only serve to further embed the grains deeper and deeper into the carpet’s fibers. did i mention the nearly-invisible-to-the-naked eye-sized pieces of glass hidden within those grains of sand? yeah, i learned that one the hard way.

like i said, sunday morning wasn’t one of my finer moments.

now you would think a responsible home-owning adult might have a vacuum nearby to speedily clean up said mess, now wouldn’t you? well, i’m not sure when’s the last time you shopped for a vacuum, but hi, they are expensive, y’all. especially if you want a good one that is capable of gathering the five pounds of shedded hair that results on your bathroom floor after any given week. so apparently i’m just really cheap because no, i do not possess a hoover in which to clean my carpets, floors, and in this case, pile of sand.

but lucky for me, my parents live approximately 12 minutes away from me, and they are more responsible home-owning adults than i, and therefore do in fact own a vacuum. and a really really super efficient one at that.

so after a quick, “help me!” plea call to the p unit, pops was on my doorstep with not only the family vacuum, but also, those extra pair of hands i had needed (but had been reluctant to ask for) for the past hour.

and it took all but five minutes to vacuum that baby sandbox up and return the chest to its proper spot in the middle of the room (with the extra man-power, we were able to lift and move with little to no shimmying).

and unless you read this story prior to your next visit to my humble abode, you may have never known of the toil and terror that went down a mere 24 hours ago. because the homestead once again reads “business as usual.”

but lest i ever get a little too “miss independent” for my britches again, i had to document said occasion.

because while i may be an independent woman (throw your hands up at me), everyone needs a helping hand (or two) sometimes (yes, probably even beyonce). 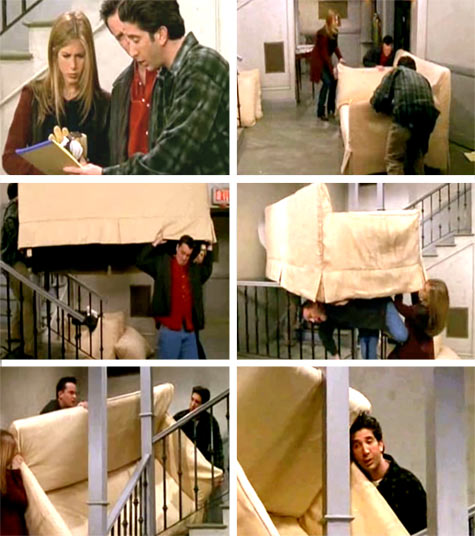 also, any mention of moving furniture makes me think of this particular friends episode. PIVOT.