yesterday i played hookie (and by “played hookie” i mean i did the upstanding thing and used a paid vacation day) so S and i could have our very own shawn(a)palooza. (as opposed to shawnuary which was just celebrated in june). since S had the entire week off of work, i figured it wouldn’t be fair to have him spend all of his vacation time alone, because i’m a giver like that.

i planned most of the day, seeing as he was on vacation and people shouldn’t have to think too hard on their days off. i realize now that i conveniently scheduled my favorite things on a day that was specifically supposed to be about him so whoops. luckily, most of the things i like to do, he likes to do as well. so for that and a zillion other reasons, we are quite the perfect match.

clad in our semi-coordinating outfits (i know, adorable), we kicked-off our day with a visit to honey’s (duh). it being his inaugural visit to my favorite breakfast spot, S was a little overwhelmed by honey’s’ vast menu at first, but eventually settled on the traditional breakfast combo (excellent choice). i, naturally, went with the pitaya bowl (sub soy milk for almond). we devoured our dishes making sure to be properly fueled for the next leg of our day -a jaunt across the big blue bridge into coronado for a bike ride around the island (another one of my favorite and inexpensive things to do in america’s finest city).

albeit a tad bit on the toasty side, i could not have ordered a more picturesque azure-sky adorned morning. we arrived at the bike rental place a hair before eleven and were issued a pair of turquoise-colored beach cruisers (with hand brakes, thank goodness) to take us around the small-town streets of the island. i led the way as we cruised along the harbor, passing tourists and fellow bike riders alike. i wish i had taken a photo of the san diego skyline that looked as pretty as a postcard as it whizzed by over our left shoulders. i suppose the mental ones i took will have to do instead.

we rode down orange blvd. and along the strand past the naval seal training center. despite the fact that i was slowly becoming a human sausage in my skinny jeans and i could visibly see my skin turning a brighter shade of lobster, it kind of felt like i was smack dab in the middle of a romantic comedy. riding alongside my main squeeze, wind through our hair, on our cute matching beach cruisers (and outfits). if only we had had a natasha bedingfield song playing in the background, we would have given kate and matthew a run for their money.

before heading back to the bike rental place, i made sure our tour de coronado took us by the iconic hotel del. with tourists swarming the grounds, it was only a matter of time before a father and his young daughter passed by (who we later learned were visiting from austin, tx), making him the perfect candidates for our iphone photographer. clearly, this wasn’t his first rodeo. can you just look at that composition?

following our mini photo-shoot, we retraced our steps (tire treads?) to return our cruisers and seek shelter from the sun, which by now, had left us with rosy cheeks, noses, shoulder blades and knees. note to self, remember sunscreen next time.

back up and over the big blue bridge we drove, en route to the coast for a little afternoon refreshment. armed with iced coffees, we returned to my humble abode for some much-deserved downtime (see also: nap) before our dinner reservations at 6:45 p.m. because he’s the best and because i had just finally purchased it on dvd, we spent a portion of our free time watching clueless. i did my best to refrain from quoting the entire movie (i only slipped up a few times, but you try not quoting the opening sequence, it’s just too good! is this a noxema commercial or what?), and reaffirmed our love for paul rudd. following the credit roll, we promptly took a glorious hour-long nap.

a quick costume change (from yours truly) and freshening up later, we headed out for date night at cucina enoteca. obviously, i would be lying if i didn’t say that the motive behind our 6:45 p.m. reservations was a tad bit self-seeking (looking at you, fried brussels sprouts), but given his appreciation for eclectic decor and design, i was also confident that S would soon share similar affections for the hip eatery.

(spoiler alert: i was right)

we each had an adult libation while perusing the menu, finally settling on a pair of entrees: the spicy shrimp angel hair puttanesca for him, the kale caesar with added roasted chicken for her, and a side of the brussels to share. while S claimed cucina’s brussels sprouts were no match for my homemade roasted variety (did i mention he’s the best?), that didn’t stop either of us from polishing them off (along with our main meals).

we finished off shawnapalooza with sunday’s recorded episode of big brother because how else would you cap a near perfect day than with the antics of #zankie and beast mode cowboy?

you know, there wasn’t much about the events of this particular monday that i haven’t done, visited, or eaten at a time (or eight) before. but collectively, these particular experiences were some of my most memorable yet. not only because i got to experience them vicariously through fresh eyes, but because i got to spend them with someone i just flat out adore.

so if shawnapalooza taught me anything (other than to wear sunscreen and opt for shorts in 80+ degree heat), it’s that while the things i loved doing before S arrived were certainly fun, having him along for the ride (literally and figuratively) simply makes them that much better. 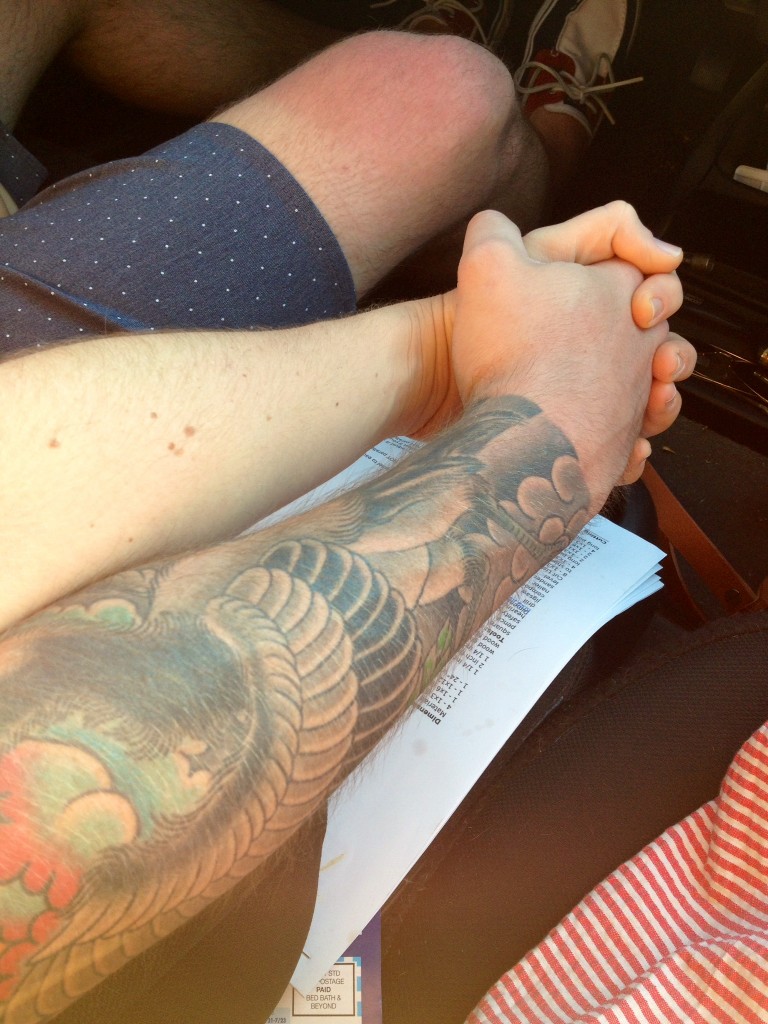