with such a weird schedule, i contemplated not posting an IFIIL this week. but then i thought, it’s christmas (actually it’s now boxing day) and that would just be scrooge-like. so here it is, the latest installment of it’s friday, i’m in love. the christmas edition.

disclaimer: in an attempt at keeping S’s identity private(ish), i have covered his adorable mug with a headshot of tim riggins at his request.

one || christmas round 1: mom & toppie. in an effort to cover all of our bases this year, S spent christmas eve with my family. before heading out to jake’s del mar for christmas eve dinner, S and i went over to my aunt’s house to see sistah & jebby. after getting in a few christmas squeezes, we headed down to the restaurant. despite having a fixed menu, jake’s offered a variety of salads, sides, and entrees and each of us were able to find something delicious to satisfy our belly. i was in heaven with a side order of their maple glazed brussels sprouts and a hefty portion of their hula pie. following dinner, we retired to my childhood home to exchange gifts. after spending the holiday in nearly the exact same way for the past 29 years, it was such a treat to include S in on the festivities this year. he blends into our clan so seamlessly and poses for pictures like a champ. it was the perfect way to kick-off our whirlwind of a christmas vacation. 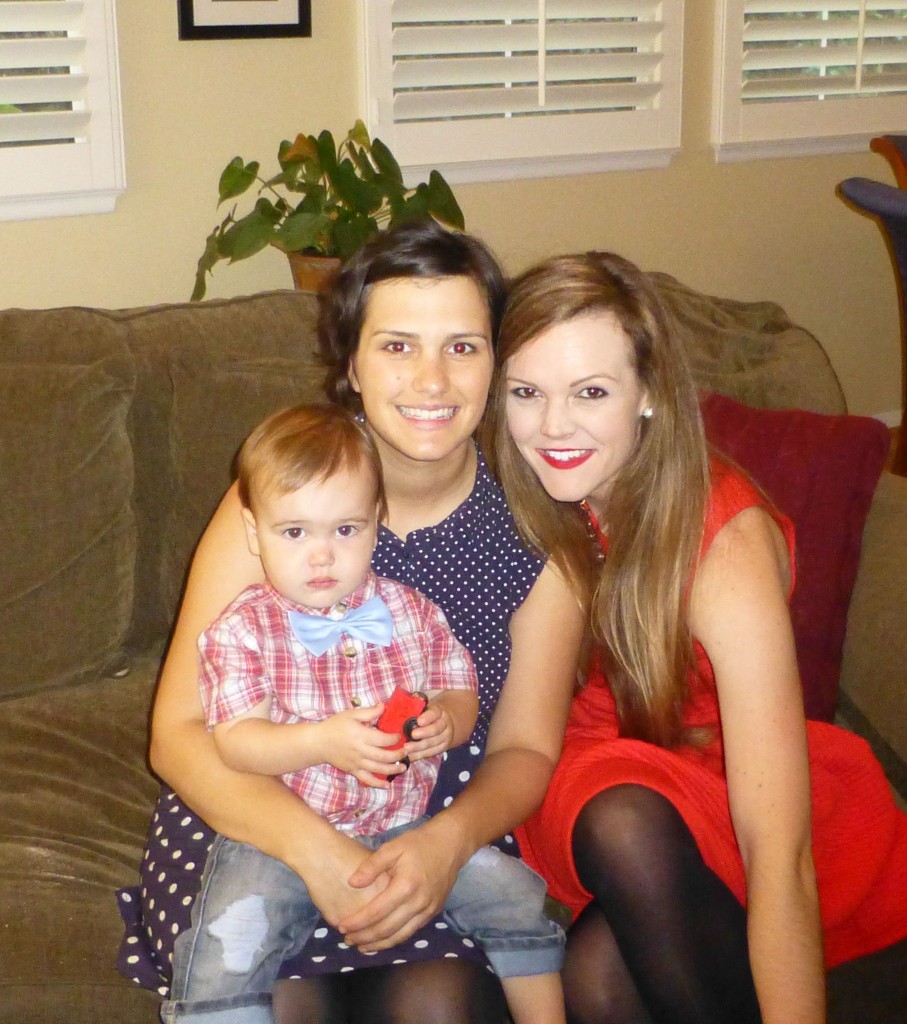 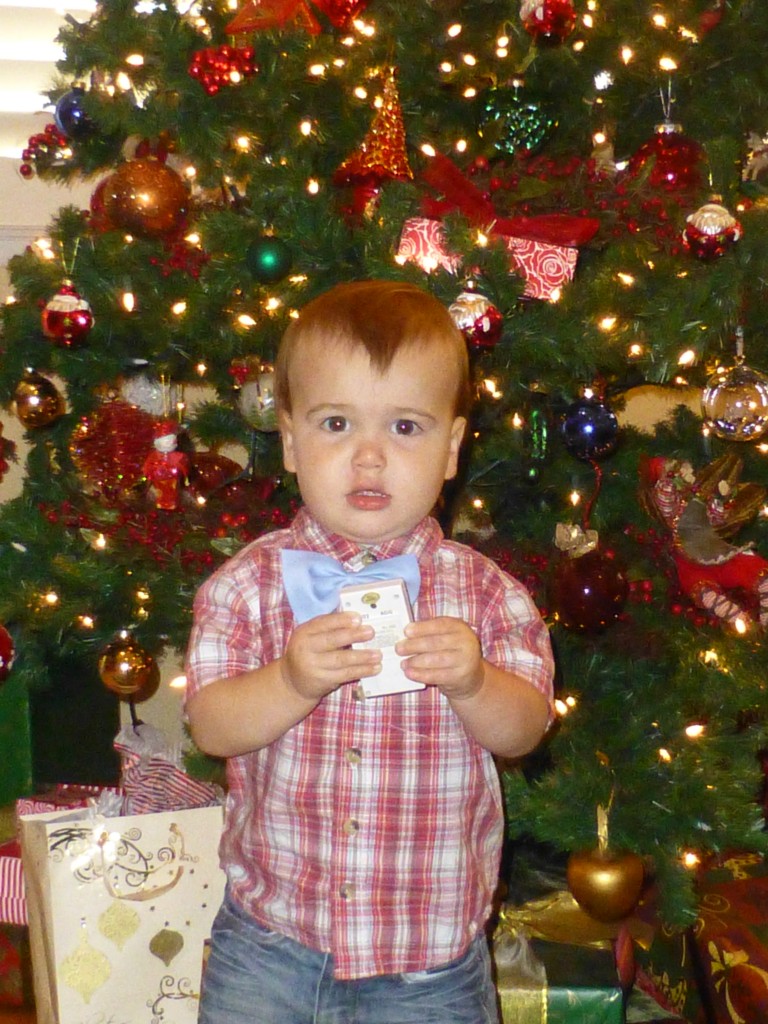 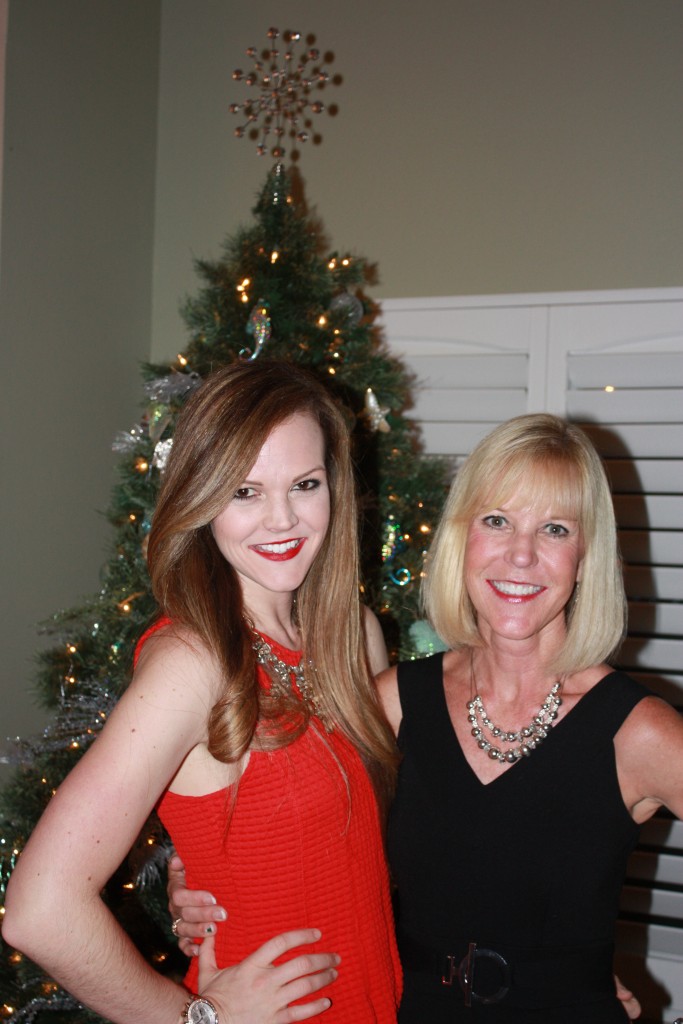 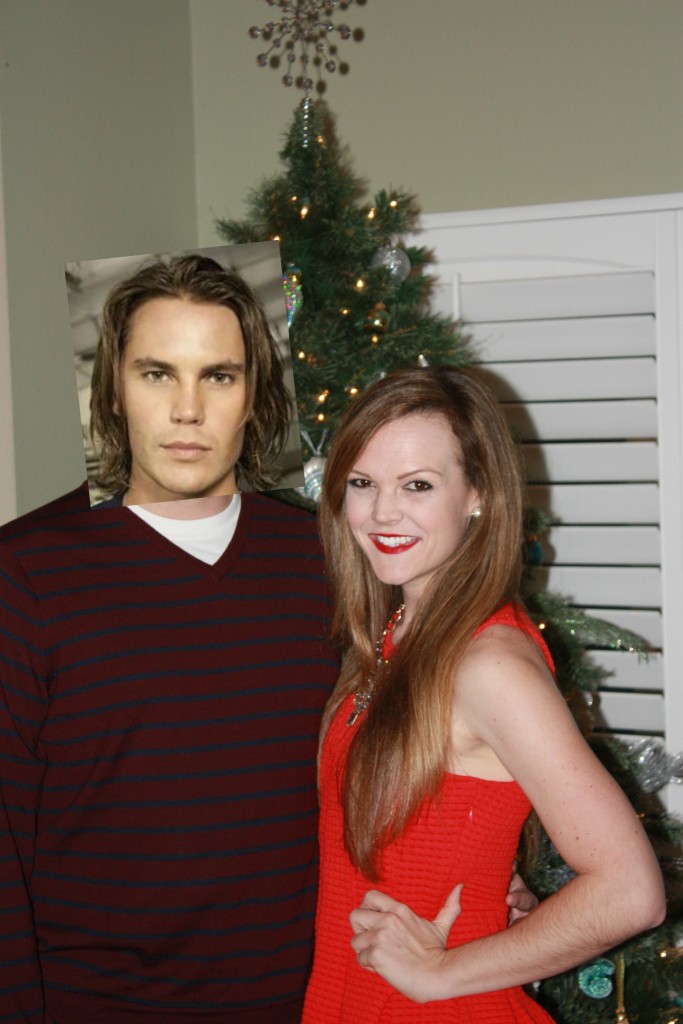 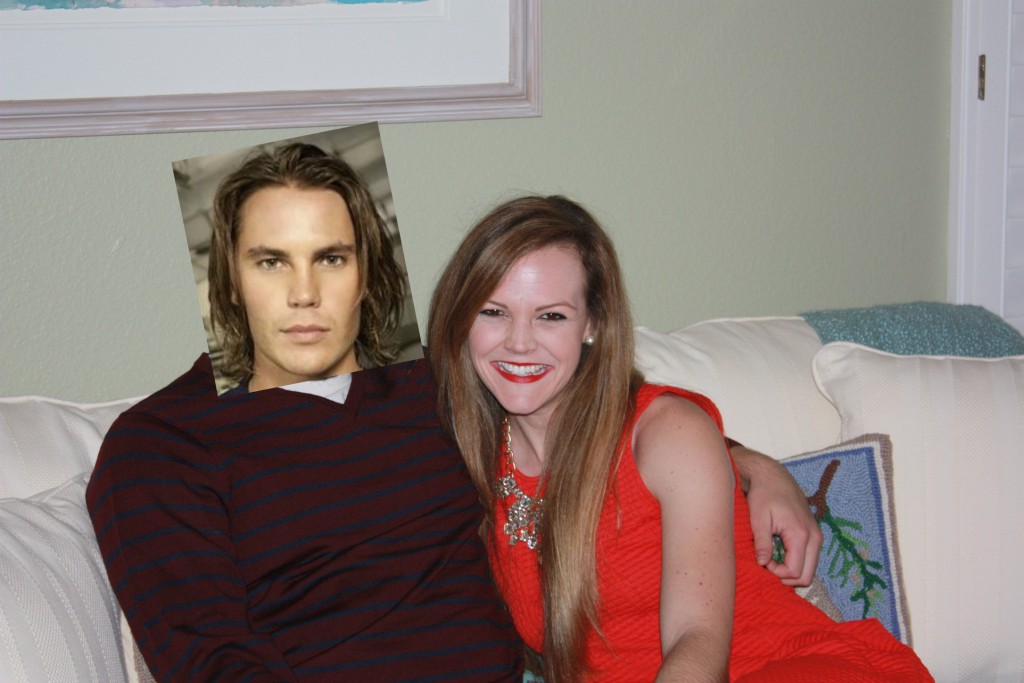 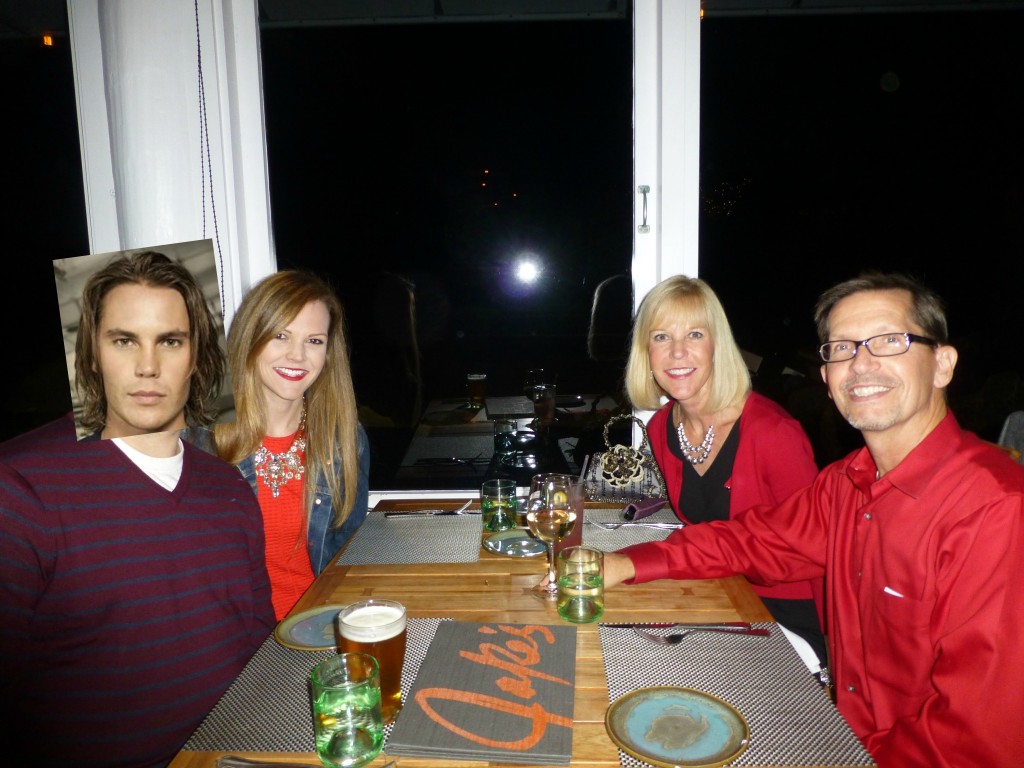 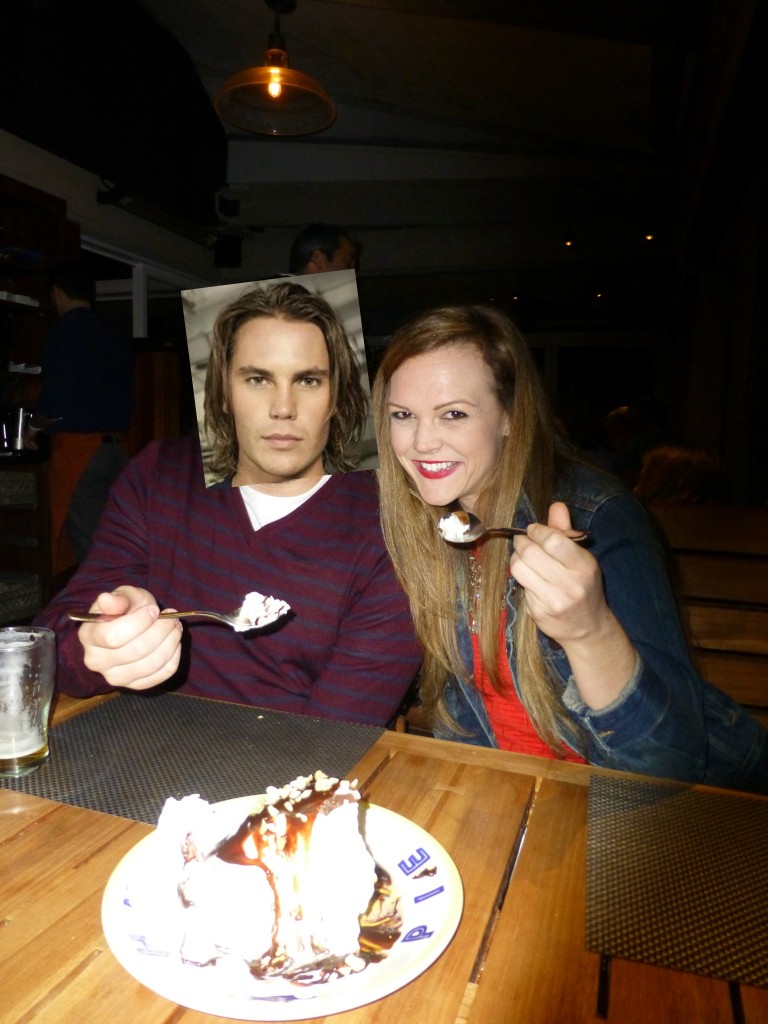 two || christmas round 2: S’s family. early christmas morning, S and i drove up an eerily empty interstate 5 en route to S’s grandma’s house for their traditional family brunch. with nearly an identical group as thanksgiving, i felt right at ease as we entered through the door and into a home smelling of cinnamon rolls, bacon, and fresh brewed coffee. we hung out, nibbled off of the delicious breakfast spread, and eventually retired to the front room of the house where we opened presents and the kids received a surprise visit from santa! having never spent a christmas away from my family, again, i was so incredibly honored and happy to spend it with S and his clan. i just blended right in -as seamlessly as he had done with my family the night before. his family is truly something special and while i love them all, his grandma has found a special place in my heart. she gifted me an embroidered blanket with my name in my favorite colored thread (sea foam green) and my favorite flower (peony). apparently nearly everyone in the family has one of these customized blankets and the fact that she included me on that list was enough to make me teary eyed as i opened it in front of her yesterday.

three || christmas round 3: dad, S, M & J. our last stop on our tour de southern california was my dad and step-mom’s house in newport beach. our visit was two-fold -one: introduce them to the love of my life, and two: celebrate a mini-christmas with them, too. we visited for a couple of hours before exchanging gifts and snapping a few obligatory shots in front of the tree. they loved him (obviously) and actually the riggins overlay is quite appropriate for the below photo as a good portion of our discussion centered around friday night lights (as it always does, dad, M & J might LOVE the show more than even i do). clear eyes, full hearts, and full bellies was definitely the theme of this holiday. i left dad’s house overwhelmed with gratitude. we had successfully spent a portion of christmas with every branch of our families and the realization of what a gift that truly is was not lost on me. 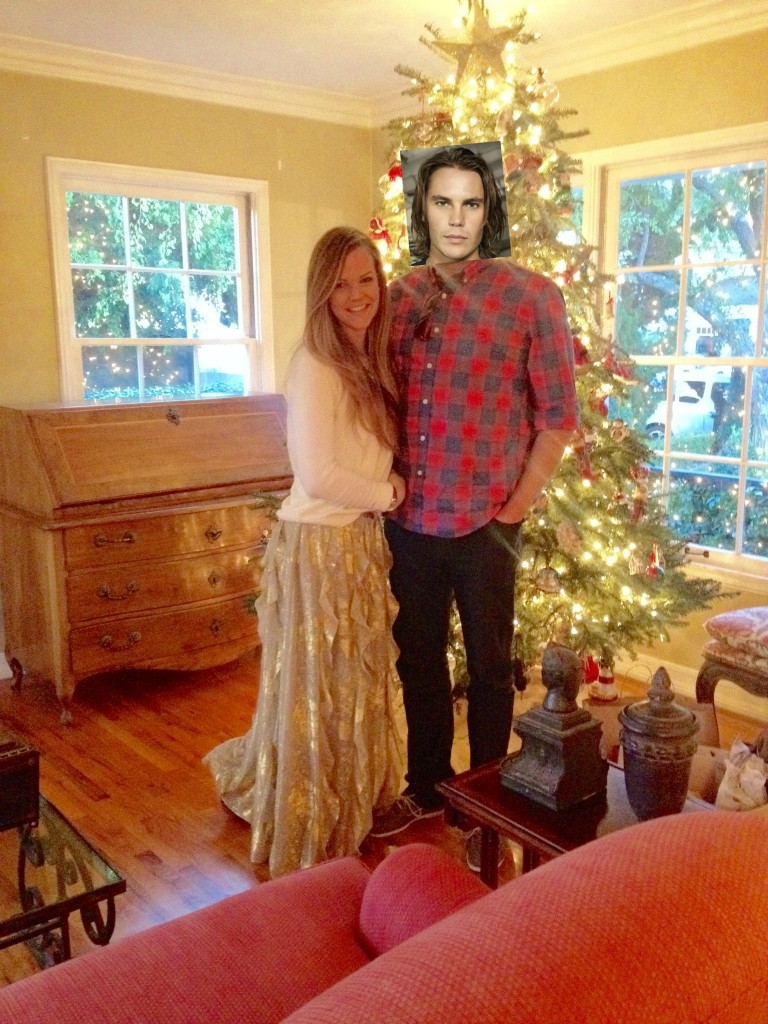 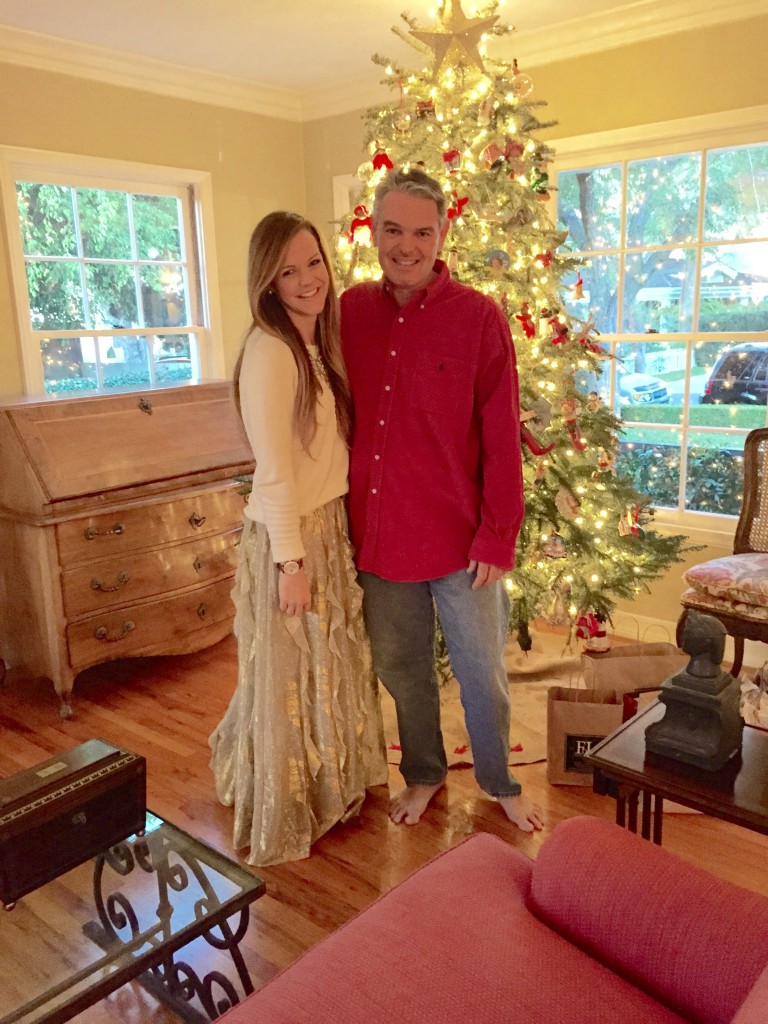 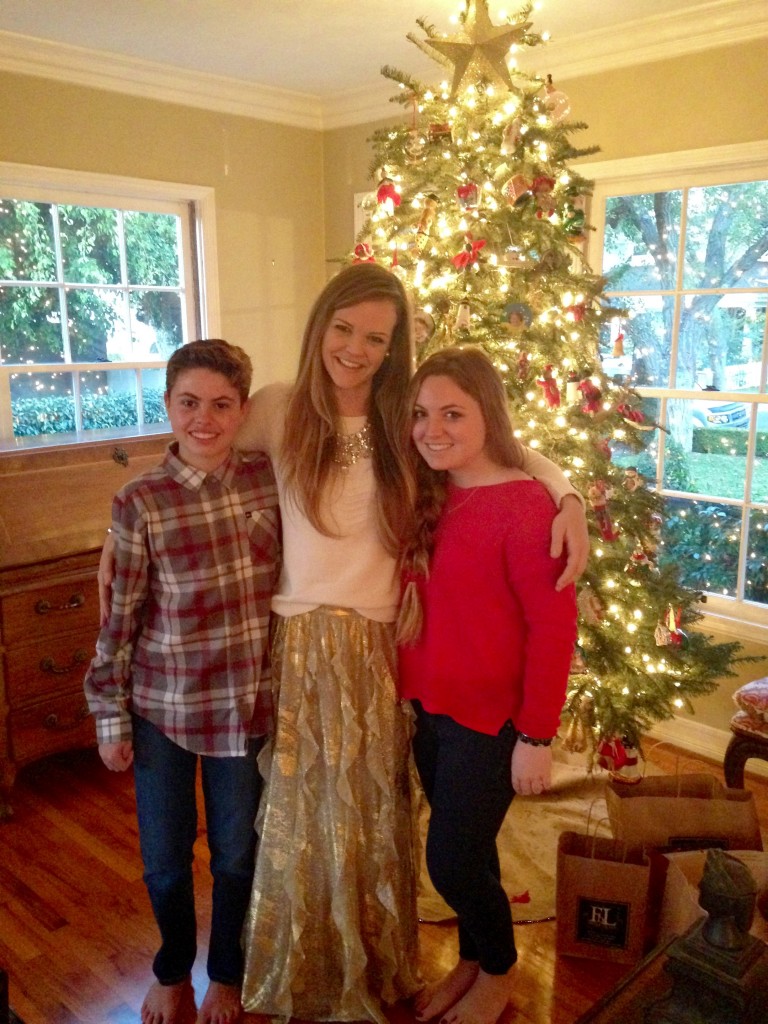 four || christmas round 4: S & S’s first christmas. after a full night+day of celebrations, when we had returned from orange county, had take-out thai food in our bellies, and were in our comfiest sweatpants, S and i finally had our christmas gift exchange. while i’d like to take credit for having excellent gift-giving skills, i have to tell you S nailed it this year and completely blew me out of the water. not only did he get me a pair of adorable chambray and white polka dot vans slip-ons i have been eyeing for months, he gave me something that i’ve actually reserved for #6 of this post because it deserves its own entry entirely. i had gotten a bunch of little things for S this year -some things he had dropped hints about, some that were surprises. but my favorite gift of all was the culmination of a few months of scheming.

back in september, a co-worker gave me the awesome idea of getting S a customized stocking. as i may not have mentioned before, S has played ice hockey since he was a kid. so when i began researching stocking styles, i included “hockey skate stocking” in my list of google searches. thanks to the wonderful world of etsy, there were actually a few different styles to choose from. ultimately, i went with a creation from wendy of LiberatorDesigns. she even went as far as to make the stocking in S’s favorite team’s (l.a. kings) colors (black, white & silver)! i placed the order back in october and when it arrived, it took everything in me to not immediately show S. somehow i let it slip that i had a special stocking for him, but it wasn’t until he saw it on christmas evening as we were exchanging gifts that he was able to see it in person for the first time. his smile was priceless. and i’m looking forward to filling it up with goodies again next year.

five || i’ll take some serial with my milk. we did it. we jumped and the serial bandwagon drove by and got us. with an hour and a half drive up to S’s grandma’s house yesterday morning, i asked S if he’d be interested in queuing up episode one. he was. so over the course of our 3 hour round-trip drive, we managed to finish almost four full episodes. it really is as addicting, entertaining, and downright fascinating as everyone has claimed. i’m kind of bummed we don’t have any big road trips coming up to get us through the remaining episodes. but considering most places in town take about 30 minutes to get to from where we live (and the remaining podcasts are only about 30 minutes a piece), we might finish the series out sooner than expected.

six || driving miss sadie. meet sadie. the aforementioned recipient of the “best christmas present ever” award. but let me back up two point five and give S all of the accolades he so richly deserves.

i have wanted a beach cruiser for years. seriously, years. but living in a community with “hills” in its name, it’s never been a practical gift. especially seeing as my hyundai isn’t exactly a bike-toting car. anyway, i think i had mentioned my love for beach cruisers when S and i rented them on coronado back in august. i later learned that S had one of his own, in cherry red. fast forward to about a month before christmas. one night S had casually mentioned that he had “played with my present” one of the evenings i taught the late studio barre classes. in the same breath he had also advised me to no longer go into the garage (not that i found myself going in there often). hmm, i was very confused/intrigued by his unintentional “clues.” i played 20 questions in my own mind on what it might be but finally just concluded that i wanted to truly be surprised. so i did my best to stop thinking about it and waited for december 25th.

when we arrived back to his house after our long day of family christmasing, we decided to take a little walk around his apartment complex (it was nice to stretch our legs). our route took us around the backside of his unit, where his attached garage is located. as we approached, he asked if i was ready for my surprise. at that moment he hit the garage door and as it slowly rolled up, i caught a glimmer of the sparkly paint job. there she was, the most perfect sea foam green (my favorite color) beach cruiser complete with hand brakes because someone can’t be trusted on the foot variety. he had added a matching bow and a sign (if you can’t make it out) that said “coronado or bust!” in reference to our upcoming coronado getaway next week and well, one of my favorite summer traditions -renting beach cruisers and riding them all over the island. i think i would have cried if i had been able to get over the shock (one eye did get pretty watery). he did so well, guys. every day with him is even more amazing, i swear. and i’m not just saying that because he just gave me a brand new bike. anyway, i seriously cannot wait to take this baby for a spin. not just next weekend in coronado, but hopefully along the coast in encinitas on our way to honey’s, through downtown del mar, and wherever else we might find ourselves. with S’s truck, we can haul our cruisers anywhere! 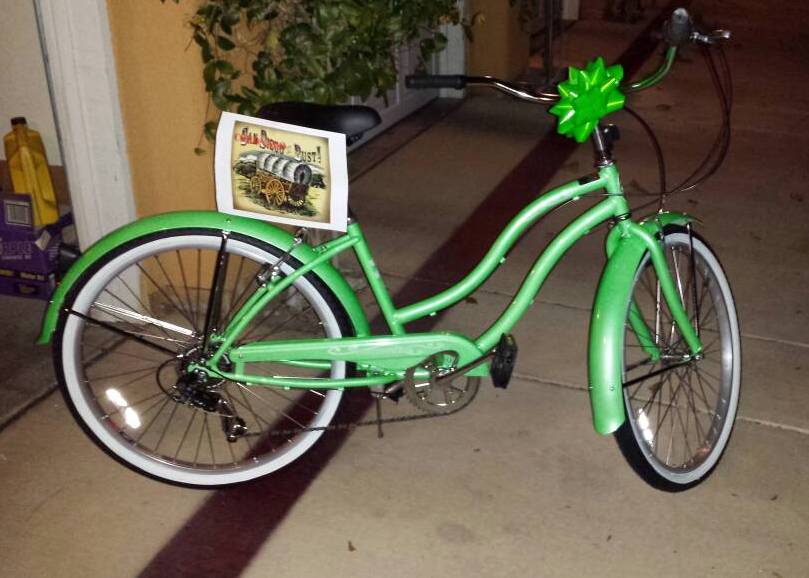 i hope your holidays were simply magical. and i hope you keep relishing in the company of friends and family throughout the rest of the weekend and into the final days of 2014. oh and if you brave the malls to make returns or capitalize on sales, i wish you good luck and good parking karma.

i’ll see you next week.