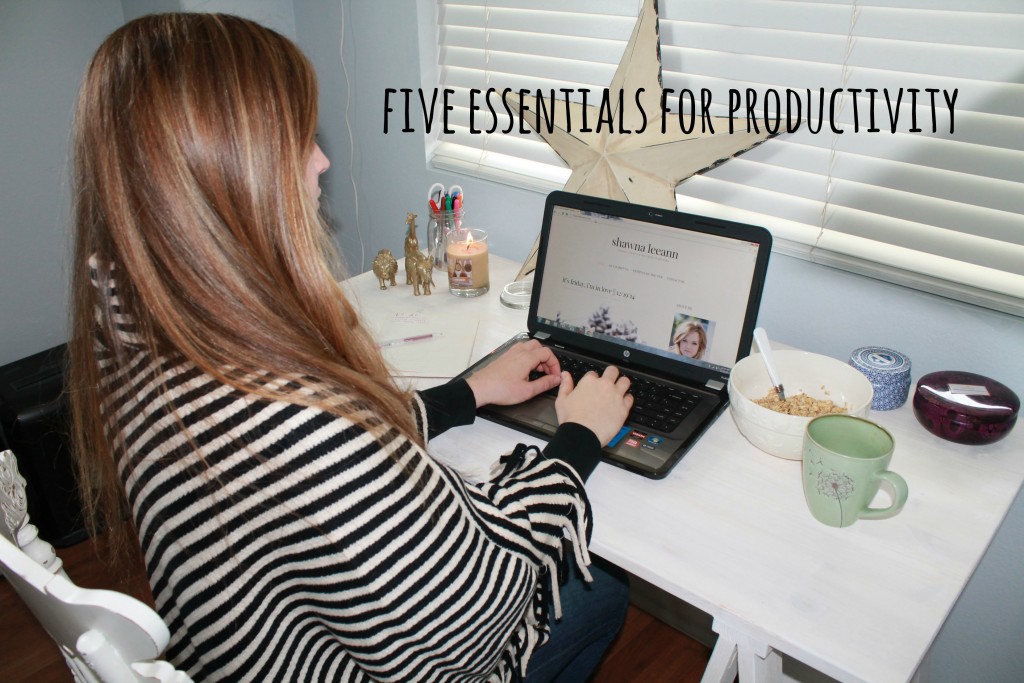 staying productive, especially when there’s always a slew of distractions vying for your attention (looking at you real housewives marathons, facebook timelines, and naps) can be tough. i’m guilty as anyone for falling down an instagram rabbit hole and emerging hours later only to find that the post i had planned on writing, or the load of laundry i had planned on washing, or any number of tasks on my to-do list, is still incomplete. so with 2015 literally just days away, i figured i’d share my personal tips on how i stay motivated and productive in the new year -to not only motivate you, but to act as a reminder for myself to stay on track in accomplishing this coming year’s aspirations.

set the mood. you know that saying “silence is deafening”? for me, the absence of noise is my worst enemy. i always have to have some sort of white noise playing in the background no matter what i’m doing -whether it’s while i’m getting ready in the morning or as i’m trying to get to sleep at night. soft music provides the comfort and calming factor i need to focus and get the job done. while i most certainly have a designated “it’s FRIDAY, WOO!” playlist for the last few hours of the workweek filled with the likes of britney, christina, jay-z, and beyonce, i usually stick to coffeehouse-style playlists for the remaining 37 hours of the week. the garden state and begin again soundtracks are on heavy rotation as are any album by ben howard, john mayer, haim, and/or tristan prettyman. and while it hasn’t been scientifically proven (yet), i’ve also found that singing along with the lyrics and playing the occasional air guitar increases productivity exponentially ;).

make a list, check it twice. when in doubt, i make a list. i make lists for the grocery store, before leaving for a trip, i even make lists for future baby names and songs i want played at my wedding. while i’d like to think my brain has the capacity to remember it all, turns out there’s a lot of grey matter already occupied by ‘n sync song lyrics and phone numbers of childhood best friends. having a list keeps me on track. when it’s all written down in front of me, i know exactly what i need to do to accomplish my end goal. that way, when a task is complete, i can cross it off with full confidence and move onto the next thing. in terms of my professional life, one visit to my office and you’ll see that i have lists strewn across my desk. i actually have a giant yellow legal pad that i turn to every morning to write down the items that need tending to that day -emails that need sending, files that need processing, phone calls that need returning, etc. i oftentimes take it one step further and prioritize the items on the list -putting the ones that need immediate attention near the top and going down from there. as the day unfolds, i work from my list to finish all required tasks before that four o’clock whistle blows. that way when i leave at the end of the day, i can be sure i made the most of my eight hours at the office.

in my life as a blogger, i employ a similar tool when it comes to keeping up with my site’s content. i strive to post engaging, relevant, and relatable information, stories, and pictures on a near daily basis. with that said, you never know when inspiration will strike. so when i can’t reach for a trusty notebook, i oftentimes make notes on the notepad of my iPhone. that way when i go to write the full post later, i have key words, quotes, or phrases already transcribed which will help me flesh out the rest of the piece.

fuel is your friend. i don’t know about you, but i’m useless when i’m hungry. if that stomach is growling, i can pretty much guarantee nothing else is getting done until it gets fed. but just like cars, humans need quality fuel to ensure they run to the best of their abilities. when we’re starving, it’s easy to grab for the easiest option (which isn’t always the healthiest). so to avoid the inevitable crash from high-sugared or high-processed foods and keep me going all day long, i like to keep plenty of healthy snacks on hand. some of my favorites include: an apple with almond butter, a perfect bar, oatmeal, or turkey slices wrapped around avocado. in addition to proper nutrition, drinking plenty of water throughout the day, limiting my caffeine, taking studio barre classes at least three times a week, and getting as close to the recommended eight hours of sleep as possible all work together to keep me going so i feel healthy and strong to see each task to fruition.

set small goals. how do you eat an elephant? one bite at a time. the same goes for tackling a big project. if you break it down into smaller parts, it doesn’t seem so daunting. for example, i recently posted a recap of S and my trip to dallas, tx. as our trip transpired over an entire weekend, there were a lot of details to recount and i was a bit overwhelmed by the thought of transcribing our adventures. so instead of writing it all in one sitting, i broke it into “chapters” and wrote a paragraph or two over the course of a couple of days instead. when i pieced back together all of the mini-stories, i eventually had captured our entire trip. sometimes when it comes to tackling a new endeavor, we can’t see the forest through the trees. unfortunately, that sinking feeling can be enough to make us want to abandon the entire project altogether. but by setting smaller, manageable, daily tasks, it can make the path to completion seem less steep. and before you know it, you’ve eaten that elephant (more napkins, please).

treat yoself. that’s right, i’m not above bribery. especially if the person i’m bribing is myself (because i already know what she likes). while achieving the goal itself is nice (for bragging rites and an overall sense of accomplishment), putting a little gold at the end of the rainbow isn’t a bad move either. i usually make wagers with myself -“when i finish this post, i can watch an hour of something on my DVR,” or “i’m going to treat myself to a pedicure on my way home from a big week of meetings at work.” when there’s a light at the end of the tunnel, it makes enduring the stress and heavy workload a bit more manageable. plus, who doesn’t love a pedicure?

looking for a bit more inspiration? the folks at Kabbage have four more ways you can maximize your productivity, so now you have no excuse when it comes to being your most productive self! for those unfamiliar with the company, Kabbage is an online provider of small business owners. so if 2015 is the year you take matters into your own hands and become your own boss, they are a great resource to get that goal jump-started!

good luck and best wishes for a memorable (and productive) 2015!