few shows have the power to induce the ugly cry. it’s funny, for how emotional of a gal i am, i tend to conserve my tears with regards to television programming. i’ve never cried during a bachelor finale proposal (ew, why would i waste my tears on that?) or well, during any reality tv show for that matter (okay, that may be a lie, i think i cried when richard blais finally got redemption when he won top chef: all stars), and despite the dramatic storylines of grey’s anatomy and private practice (and yes, i’m probably still the only person who still watches these shows), it takes a really really heavy episode for me to channel my inner sobber.

now give me a good google commercial, an inspiring nike ad or that new clip from johnson & johnson assuring all of the mother’s out there that “they’re doing ok”, well, then, pass me the crate of tissues please and thank you.

but i’m not here to talk about effective marketing schemes.

what i’m trying to say is that there are only a select few series (both past and present) on the old boob tube that habitually tug at my heart strings. their casts and story lines might as well be my emotional kryptonite for whenever i’m lucky enough to take in their weekly 49-minute stints (accounting for commercial breaks, of course), i simply cannot stifle the waterworks.

sex and the city (not every episode but most certainly the finale -every.single.time.)

and of most recent,

i can’t help but think that parenthood has caught a bit of the FNL curse -a show not fully appreciated in its time. and as a result, i am fearful that the season finale that aired last night may also be its swan song, too.

it’s the show everyone has continually told you you should be watching (“everyone” being at least me) but as we find it already in its third season, perhaps committing this late in the game seems too daunting of a task for you to undertake. but that’s the thing about this show, much like its distant cousin, friday night lights (here’s a fun fact, parenthood was created by the same dude responsible for all things dillon, texas-related, which is why billy riggins made an appearance last night as crosby’s best friend, i know, i was screaming at the tv, too!), despite having zero background knowledge of the characters, one can tune in mid-season and quickly pick up on what is transpiring on screen. it’s almost as if each individual episode stands alone. a vignette. a baby movie. but unlike a movie, upon completion, you have the assurance that you’ll see the braverman clan the following tuesday at 10 p.m.

or maybe you won’t. because if the scary rumors is true, parenthood may not be renewed for a fourth season. and if that is the case, it will indeed be a travesty for all mankind (yep, that serious) and most certainly leave a parenthood-sized hole in my weekly television-viewing routine.

but if last night was indeed goodbye, well then at least adam, christina, hattie, max, julia, joel, sydney, sarah, amber, drew, crosby, jasmine, jabar, camille and zeke did me proud. i mean, don’t even get me started on this entire scene. 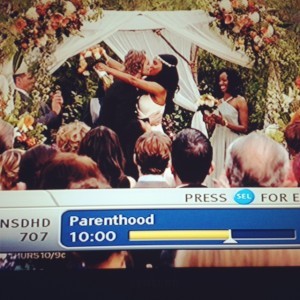 this was the point at which i was unable to breathe due to the overflow of tears. insert wheezing/gasping for air here. cute.

and i realize that it’s a little unsettling admitting that i balled like a baby multiple times while watching last night’s finale by myself snuggled under a blanket in my dark living room. but as if you didn’t already know, i’m never too proud to confess such incriminating details about my life. i’m proud to say that this show has struck a cord with me. i think it’s one of the better series to grace our screens in a good long time. and y’all, it’s called “parenthood” because well, it’s centered around four siblings who are all also, you guessed it, parents. but it’s so much more than the ins and outs of holding the world’s most sacred title (“parent”). it’s about family in general. and life. the good, the bad, and the ugly. the ups and the downs. the heartaches and the triumphs. that despite the fact that life may deal you a few too many lemons, your family will always be there to help turn them into lemonade.

i know i may overuse my enthusiasm for things -trader joes, really great department store sales, lululemon pants, pure barre, etc. -as well as have questionable taste when it comes to all things television show-related, but i’m not over exaggerating here. this show is magical. so do yourself a favor and track down the first two seasons and log them into your memory banks so you’re fully prepared if and (fingers crossed!) when this show returns in the fall. because then, well, we can all ugly cry together.

and i’ll bring the kleenex.

p.s. the title of the post is from the series’ theme song, “forever young.” and i just stumbled on this gem -the official music video. thank you, internet.