thursday seemed to be an evening of reunions. first, with a college friend who was back in the states from australia for his brother’s wedding and second, well, it’s kind of a funny story.

you see, as you already may or may not know, i have formed many a friendship with the kind staff at my neighborhood trader joe’s over the years. i’ve even likened the encinitas location to my own personal cheers. and while my frequenting of said establishment has been significantly lessened due to the rising price of produce and in turn, sprouts’ ability to keep that aspect of my expenses a bit more in check (i know, i’m totally cheating on tj’s), i can still find a familiar face every time i decide to pick up a bottle of ketchup, bag of trail mix and or, well, let’s be honest, like half of the store.

but even if i made the decision to pick up the frequency of my visits, one face i would sadly not run into (rather, one body, because that would be really weird for me to run into just a face) would be that of my dear friend, andy. because about nineish months ago, andy transferred to the point loma location at liberty station (at least that is what i had been told). and along with his transfer went the weekly updates about his adorable son, henry as well as the accompanying iphone photos, and you know, my alliance for locating seemingly “sold out” merchandise (it may not be on the shelf, but that doesn’t mean a rogue bag/carton can’t be located in the back storage!). so i made the promise that if i ever found myself at the alternate location (which was more than likely to occur seeing as i find myself in point loma on the regular these days), i would inquire if my long lost friend was on the floor that day. even if it was just to say hello and to ask about henry.

well imagine my surprise when, as i was trotting along down the frozen foods aisle thursday evening doing a little ingredient-gathering to prepare a meal for a special someone at trader joe’s LA JOLLA location, i ran into none other than andy himself! and i did as anyone would do; upon realization that the identity of the hawaiian shirt-clad gentleman that stood before me was indeed a familiar acquaintance, i audibly squealed. “ANDY!” i yelled. “shawna?!” he replied back. “i thought you had transferred to point loma!” i inquired accusatorily. turns out, the encinitas staff had lead me astray (RUDE -stephanie tanner style). never the matter, because i had found him! he had been just a few miles away all this time.

and watching this whole scene play out was my friend, almost spellbound by my interaction with this trader joe’s employee. i mean, doesn’t everyone hug their specialty food store managers? i suppose not. regardless, i was actually very happy that he was able to bear witness to an encounter such as this. mostly for the fact that i’m not quite sure if people truly understand how deep my affection for the popular specialty food chain, as well as the employees runs. furthermore, i also can’t be sure if my most dear fully comprehend just how serious i am when i say that i can make friends most anywhere. for someone who used to be painfully (i mean, painfully) shy, i oftentimes feel as though i’m an entirely different person these days. i mean, i might as well be walking around with a sign on my forehead that says, “you look nice, talk to me, and we’ll be besties.”

but you know what? i have learned that life is WAY more fun when lived as if the stranger beside you in starbucks or on your southwest flight could just be your next best friend. or as is the habitual case with my thoughts, the person responsible for putting your blog/and or writings on the whole on the map. and well, i don’t think i’ve ever heard anyone utter the phrase, “gosh, i just wish i had LESS friends. life would be so much easier then.”

so yeah, i was reunited with an old friend last thursday. two, if we’re counting the aussie import. i mean, i was just going in for some bananas and gluten-free pancake mix, the last thing i was expecting was to see henry’s dad after an almost year-long hiatus. but there he was, right next to the frozen peas. and lucky for him, i just happened to be wearing my forehead sign that night. 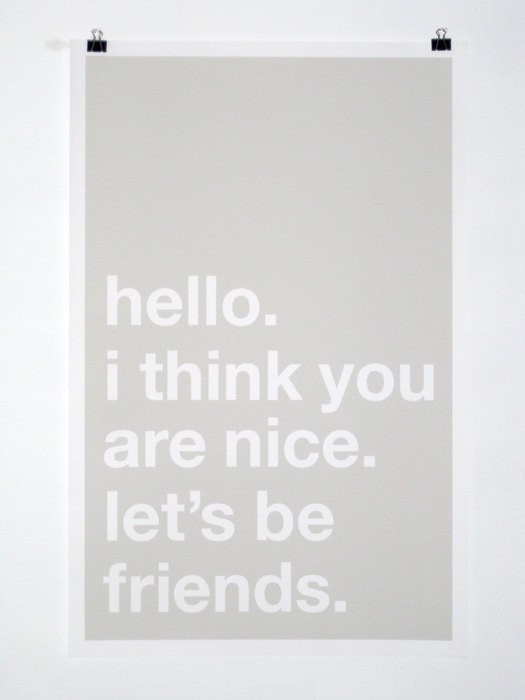