it premiered on september 22nd, 1994. i remember thinking how cool i was for being allowed to watch its pilot episode. and from that moment, my thursday evenings were never without 30 minutes with my six closest friends. rachel, monica, phoebe, joey, chandler and ross. the six twentysomethings that lived in nyc in apartments across from one another and who frequented central perk, a coffee shop with an iconic orange couch. i think i’ve seen every episode. at least four times. and i think if i only had to watch one show for the rest of my life (don’t hate me, coach taylor, but i don’t have the emotional stamina to watch friday night lights all day errday), friends would be it.

so today i’m thankful for friends. the show. day three had my other friends covered, remember? i am thankful for rachel green, phoebe buffay, monica gellar-bing, chandler bing, joey tribbiani, and ross gellar. i am thankful for how they make me laugh even years after the first episode i watched as a fifth grader in 1994 and that i can find ways to incorporate show quotes into most every daily conversation. i am thankful for how it bonds me with acquaintances who share a similar love affair with the show and that tbs airs old episodes most days that end in “y.” i am thankful for the thanksgiving episodes and for the one where no one’s ready. “i better not do -i don’t know, lunges!” these six friends got me through a lot of nights in college and that first year after college, too. objectively i know that they are just tv characters and that the actors that play them have real lives and that jennifer aniston is jennifer aniston and not, in fact, rachel green, but on a personal level, i tend to disagree. i think there’s a little bit of monica gellar-bing’s neurosis hidden in courteney cox and that lisa kudrow is totally phoebe buffay, just a bit less flighty. i have to believe that matt leblanc has a little bit of joey tribbiani’s luck with the ladies and that chandler bing still resides somewhere in matthew perry’s personality. is david schwimmer a real life ross gellar? i don’t know, last i checked he does stuff on broadway now.

anyway, bottom line, this show is one of those shows that if i come across on tv, no matter how far into the episode i find it, i will set down the remote and watch the remaining story line play out. it’s a feel good show. it’s quotable and laugh-inducing, and at times it even gets a little emotional. so thanks kevin bright, marta kauffman , and david crane for creating a show that saw me through my pre-teens, adolescence, college, and now twentysomething-hood. as a token of my appreciation, i plan on making y’all half an english trifle and half a shepherds pie. 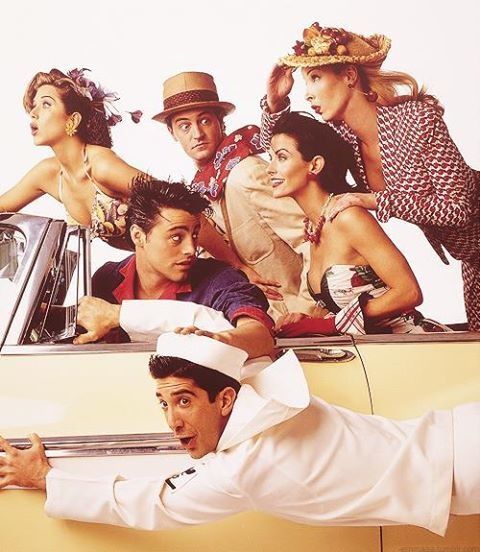