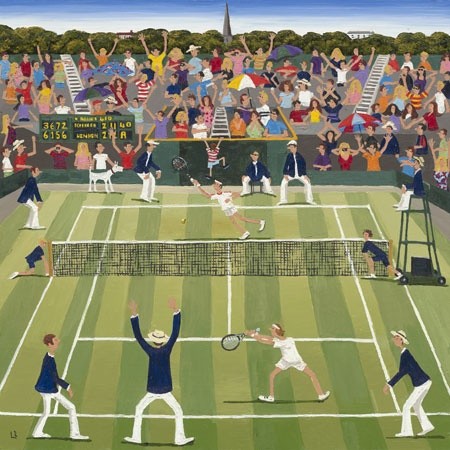 for someone who loves tennis, choosing a favorite of the four major tournaments is like choosing a favorite flavor of ice cream. you love them all and for different reasons. but at the end of the day, you know deep down in your heart that your allegiances will always lie with cookies ‘n cream.

the way i feel about the vanilla and oreo medley is kind of how i feel about the championships at wimbledon. sure, how can you not love the intrigue of the french open with its burnt umber colored courts made of clay and hello, it’s proximity to paris the most romantic city in the world? or what about the australian open whose arena, now having been there myself, is filled with a frenetic energy and warmth reflective of the australian culture itself. and then there’s the u.s. open, on our own american soil -whose courts have seen some of the most epic and memorable match-ups of all time (i.e. sampras vs. agassi and that one time andy roddick took home the title in 2003. oh what up mandy moore?)

but there’s something about the tradition and refinement and those berries & cream that makes wimbledon just a hair more special than the rest.

i know most focus is on the world cup right now (go USA), but in other sporting news, the 128th championships at the all england club officially kick-off today. therefore, this may or may not turn into a tournament update blog for the next two weeks (sorryi’mnotsorry in advance). but until i can see those perfectly manicured lawn courts with my own two eyes and until my nostrils are tickled by the scent of bleach wafting from the players’ freshly washed whites, until i sit my own little booty atop henman hill with a few (hundred) thousand of my friends, and until i cheer wildly with my own vocal cords for the underdog battling it out on center court…

until then, i’m going to continue my love affair with the tournament from across the pond, by staying glued to the television and live-streaming coverage on my computer screen. because one day (who knows when) i won’t have to pretend what it’ll be like to experience these things first hand.

and what a day that’ll be.