when two of my best friends moved to san francisco nearly five years ago, i remember being so excited for them. sure, it would mean that they would no longer be just a short drive away (unless your version of a “short drive” is 8 hours), but they were embarking on a new chapter of their lives and not only that, i now i had a place to visit/stay whenever i wanted to escape to the bay (that rhymes!). and over the course of their transition from southern to northern californians, i have been lucky enough to visit them a handful of times -averaging about one visit per year. so when the opportunity arose this year to visit them with S in tow, the trip gained a whole other level of specialness. though M & M were able to meet S and me for coffee over the holidays last year, this visit would provide a chance for all of us to spend a bit more quality time together.

since our original 4:20 p.m. flight out of san diego was delayed a whopping FOUR hours on friday, i called southwest in a panic and thankfully lillian, our southwest rep and personal magician, was able to get S and me on an earlier outbound trip. making up a good two hours, we arrived at san francisco international a little before 8 p.m. M & M picked us up and we drove directly to our chosen dinner spot for our inaugural vacation meal -authentic mexican food from the mission at acclaimed la taqueria. voted “best burrito” in america by ESPN as well as coming in 5th in food network’s ranking of the top five tacos in the country, la taqueria is an institution in the city — as evidenced by the long line that greeted us upon arrival. thankfully the line moved quickly and before we knew it, we were enjoying delicious mexican cuisine. i ordered a plain chicken taco in a corn tortilla with a side of guacamole while S opted for their carne asada burrito. we also assisted M & M with their two baskets of chips and salsa since the restaurant had botched their first order. i mean, it was obviously the right thing to do. 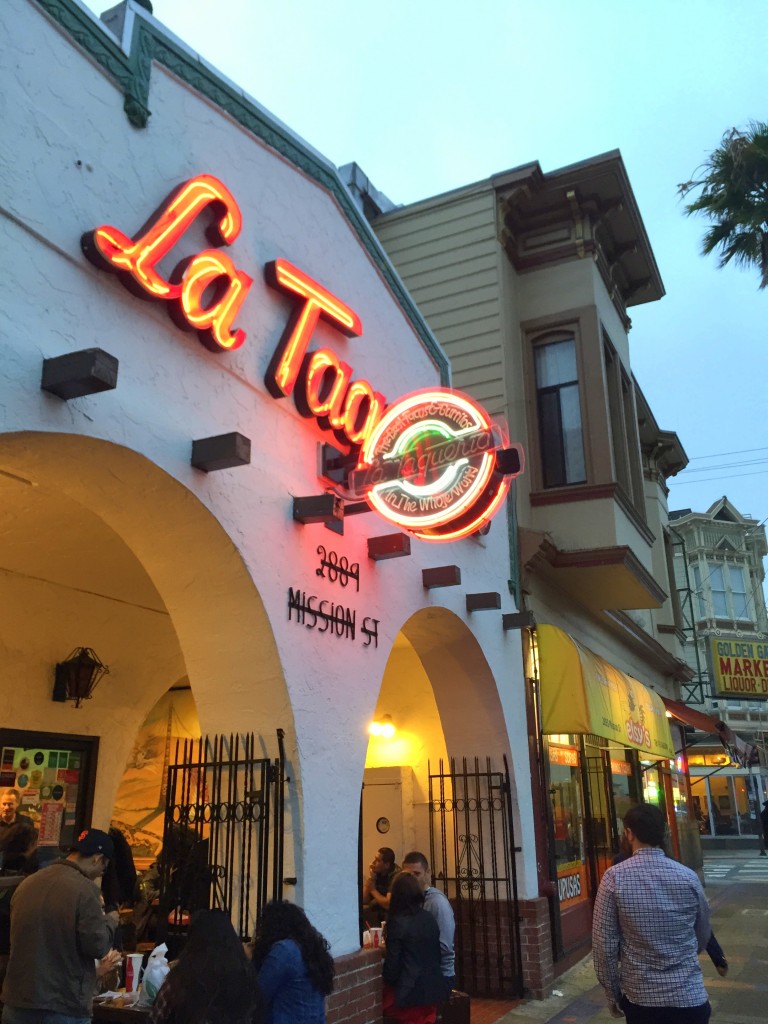 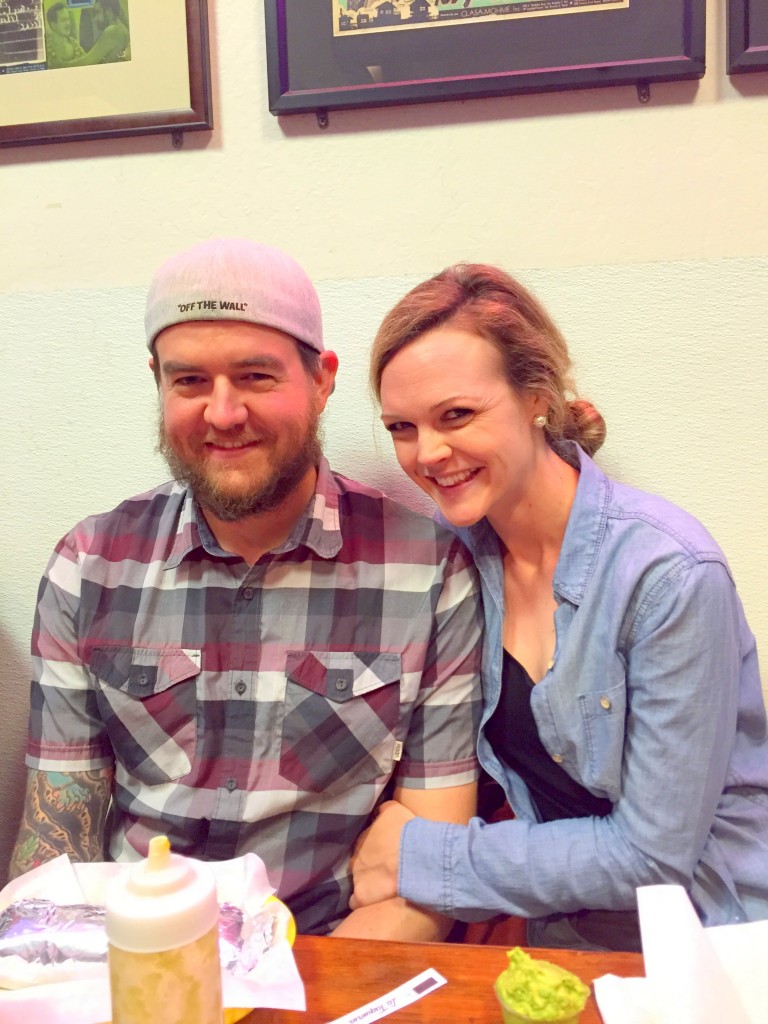 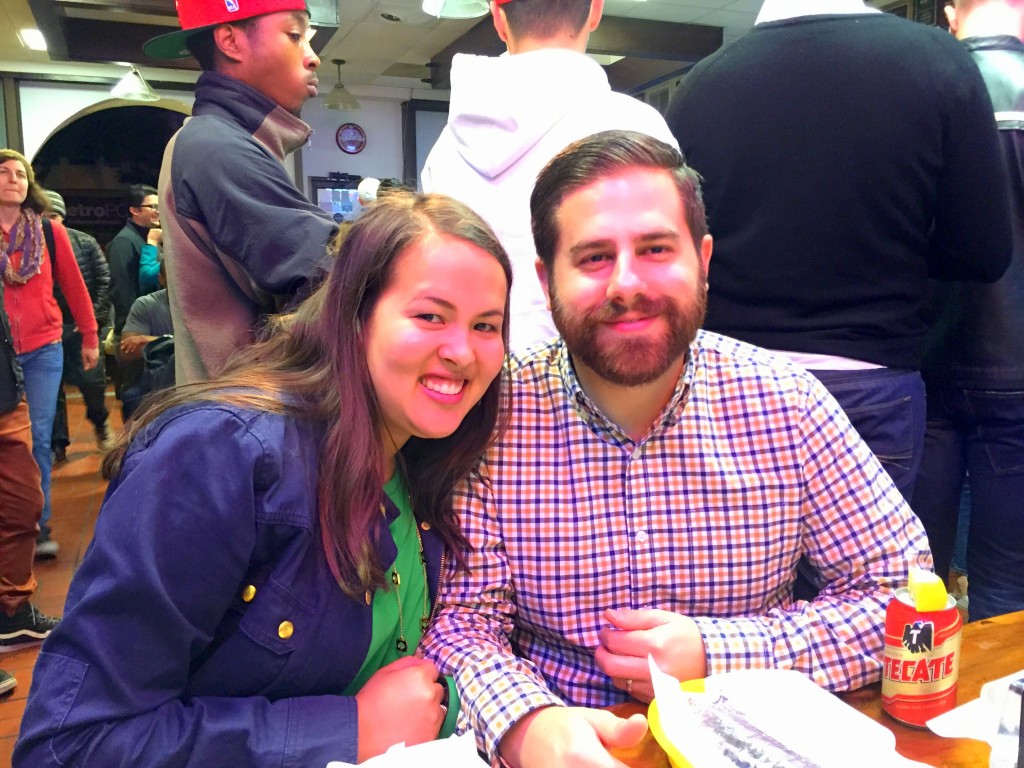 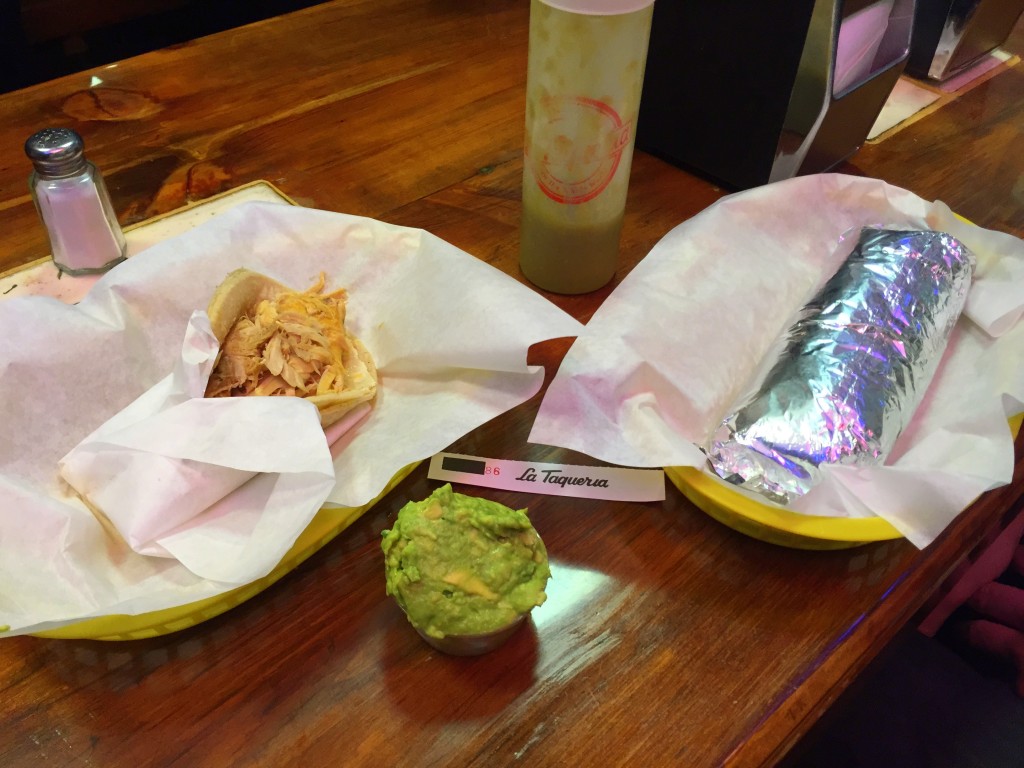 with full and happy bellies, we returned to M & M’s adorable abode, fixed atop the portero hill neighborhood on the outskirts of the city. it was there we were greeted by our third roomie for the weekend, their adorable french bulldog, mayzie.

view from their apartment 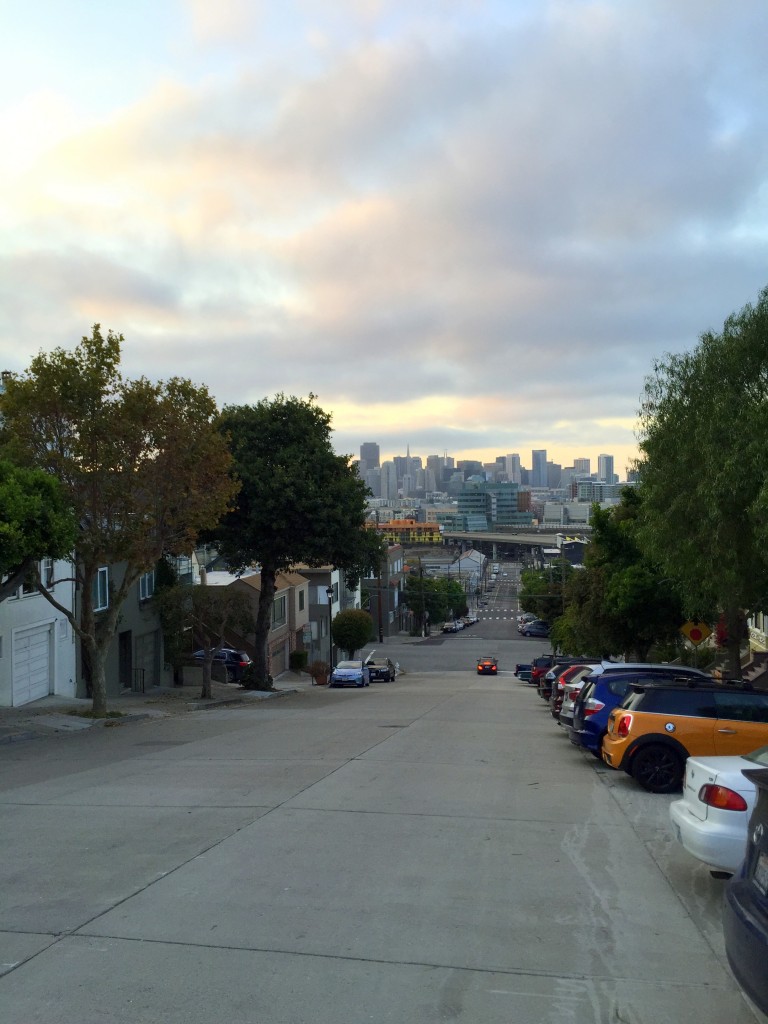 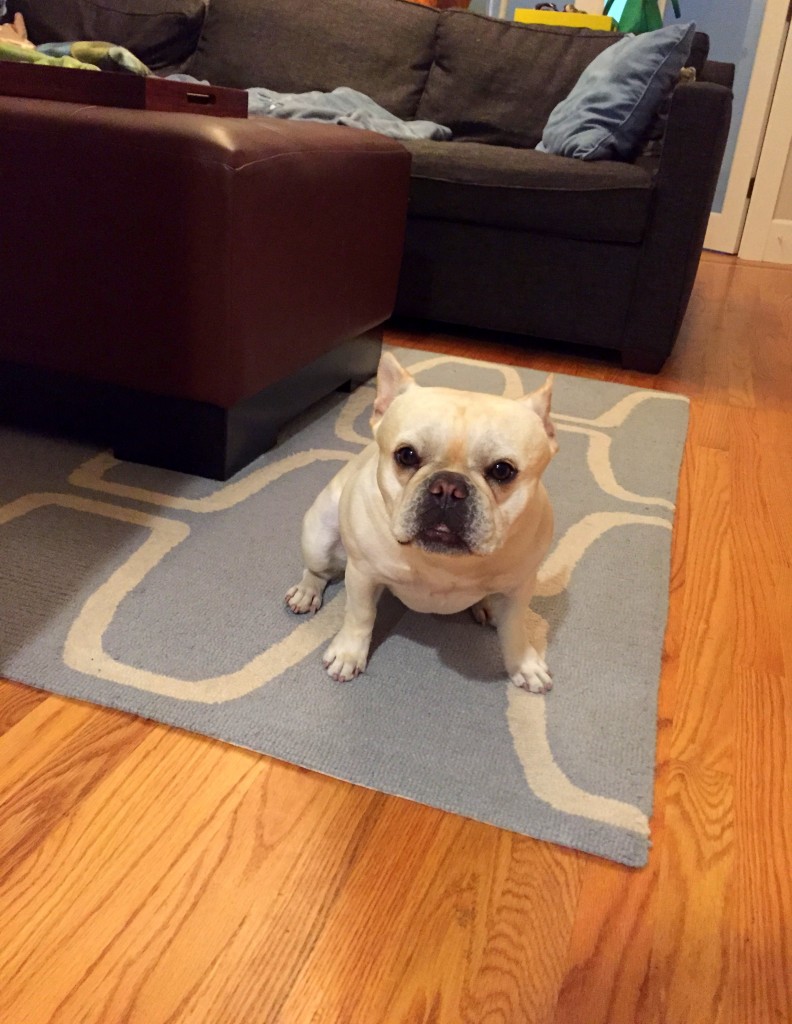 the next morning, we hit philz coffee for a quick caffeine fix before hitting the road en route to napa. i got their tesora -a medium-roasted blend with cinnamon and hazelnut notes while S opted for their traditional cold brew. whenever i’m in the city, philz is always a stop on my list. 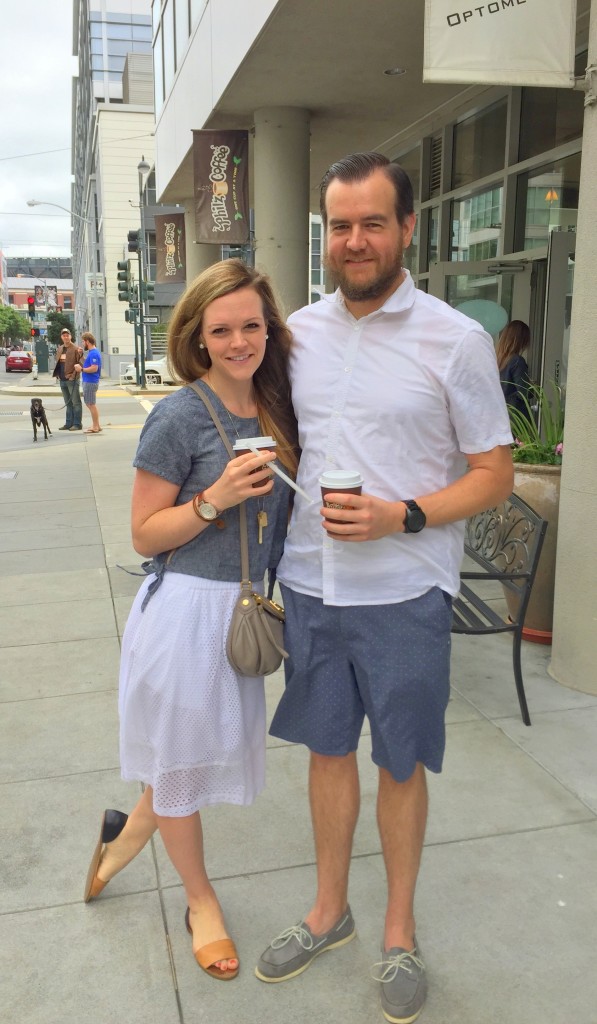 once properly buzzed, we began the hour-long trek to wine country (so we could get a different kind of “buzzed”). you know, whenever i think about napa i am always reminded of a line from a sex and the city episode –the one where big tells carrie he’s moving to napa. her response? “you take a nap-a, you don’t move to napa!” we could have probably used a nap-a after our day in the vineyards, but the weather and scenery were far too perfect to pause for sleep.

after doing extensive research, M had made appointments at two wineries that offered both red and white wine in their tastings -that way everybody was happy! our first stop was frog’s leap, a winery known for their organically grown grapes and dry-farmed vineyards. from the big red barn, to the house that doubled as a tasting room, to the stunning gardens boasting fresh fruits, vegetables, and flowers, the winery was what napa dreams are made of. 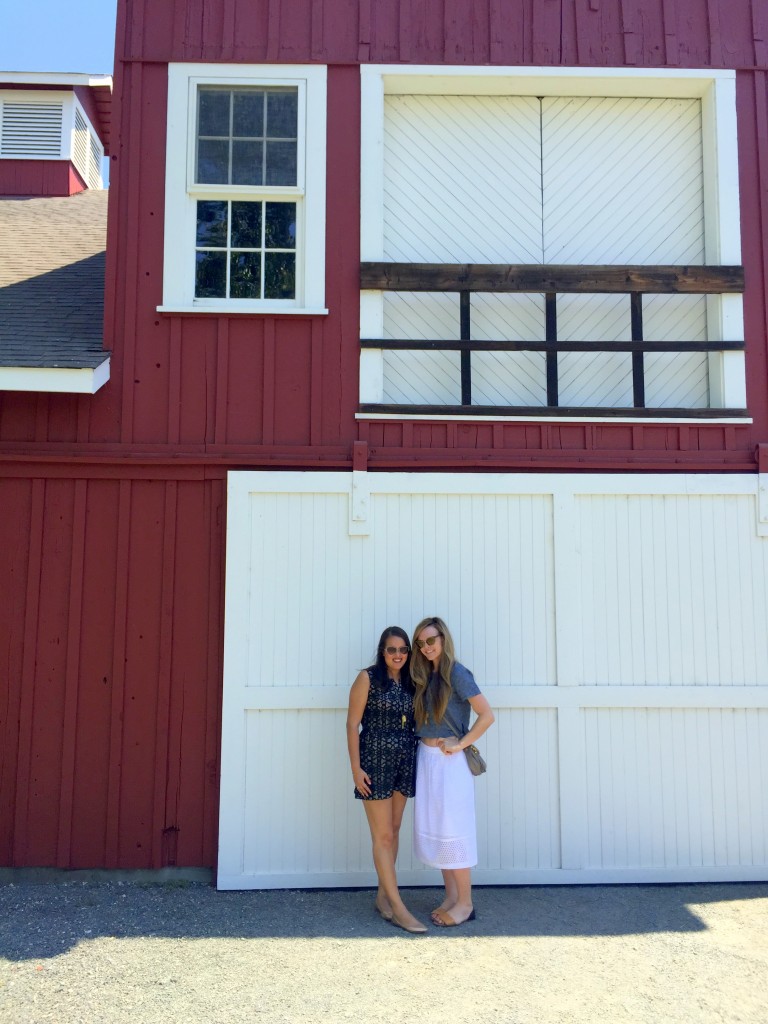 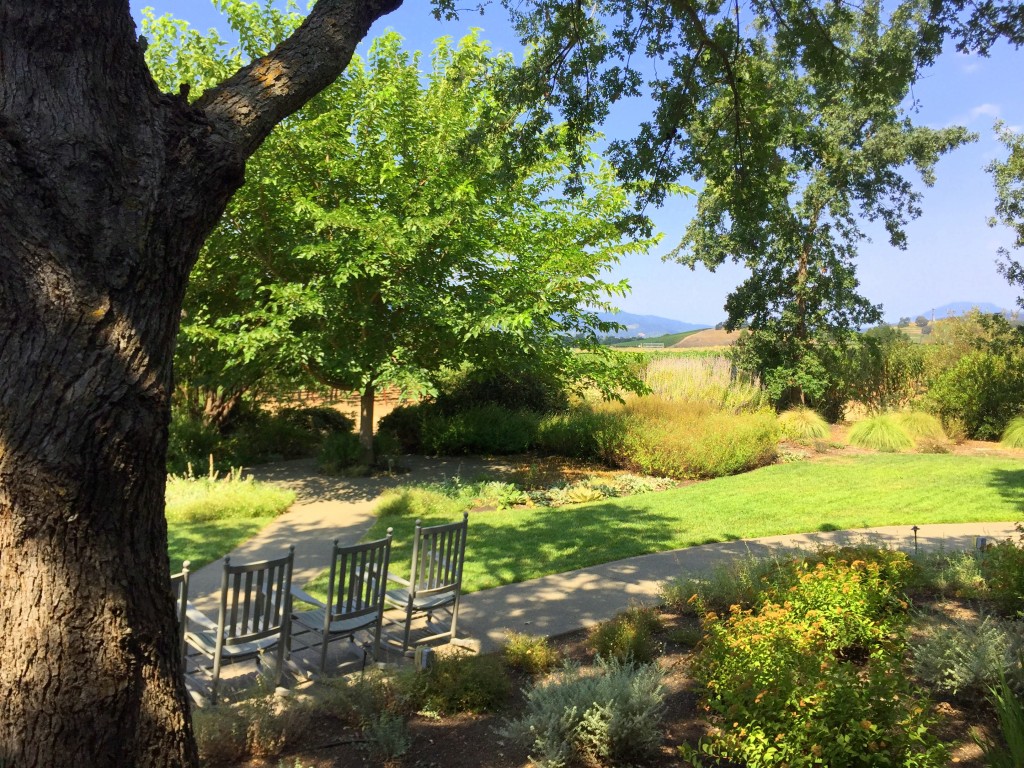 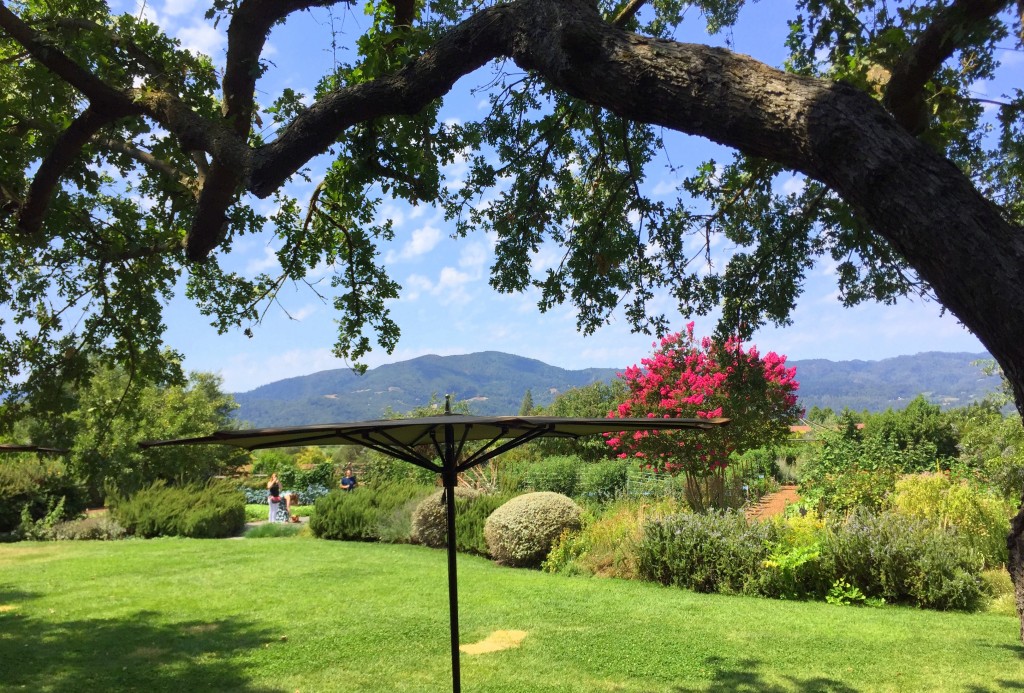 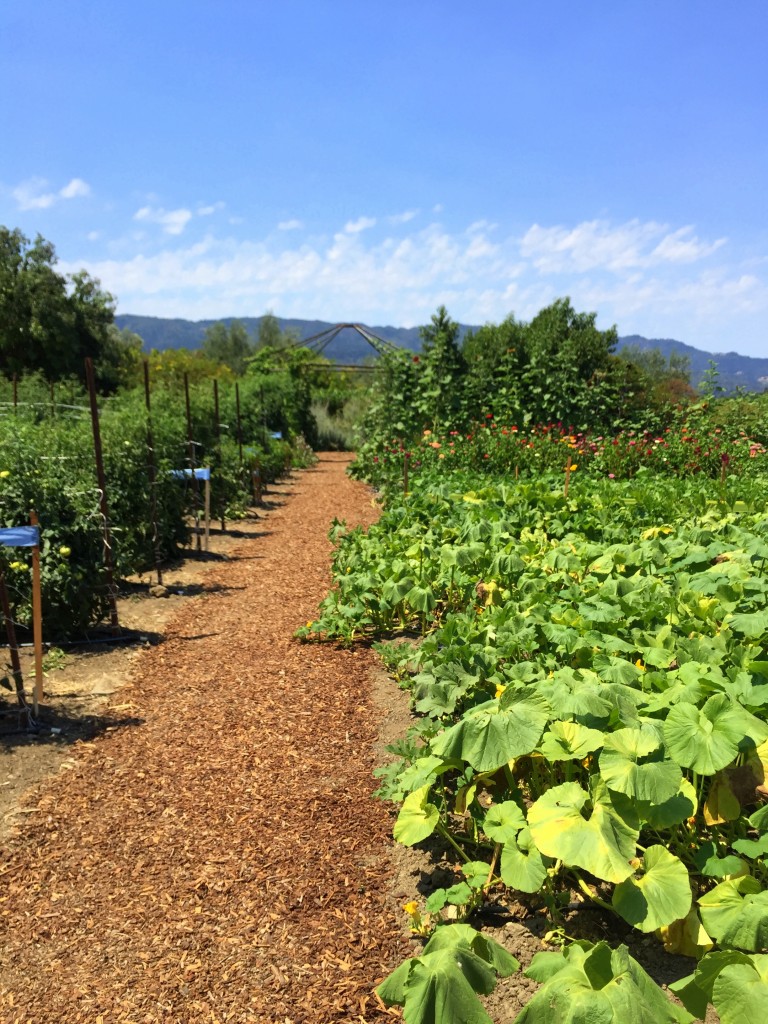 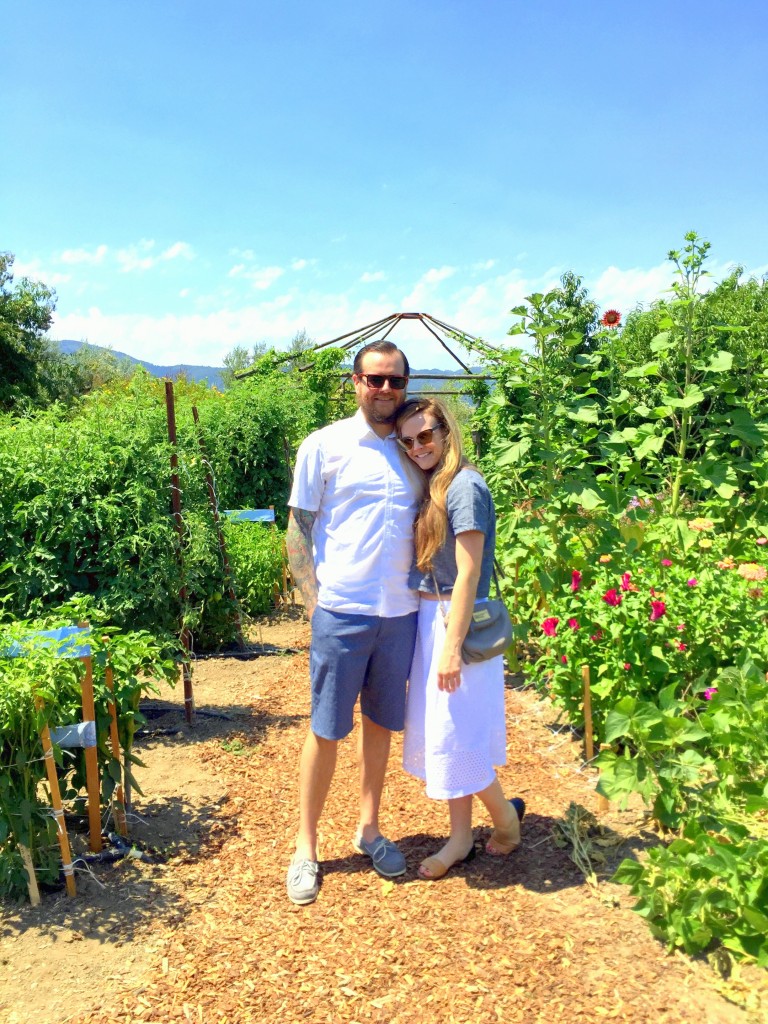 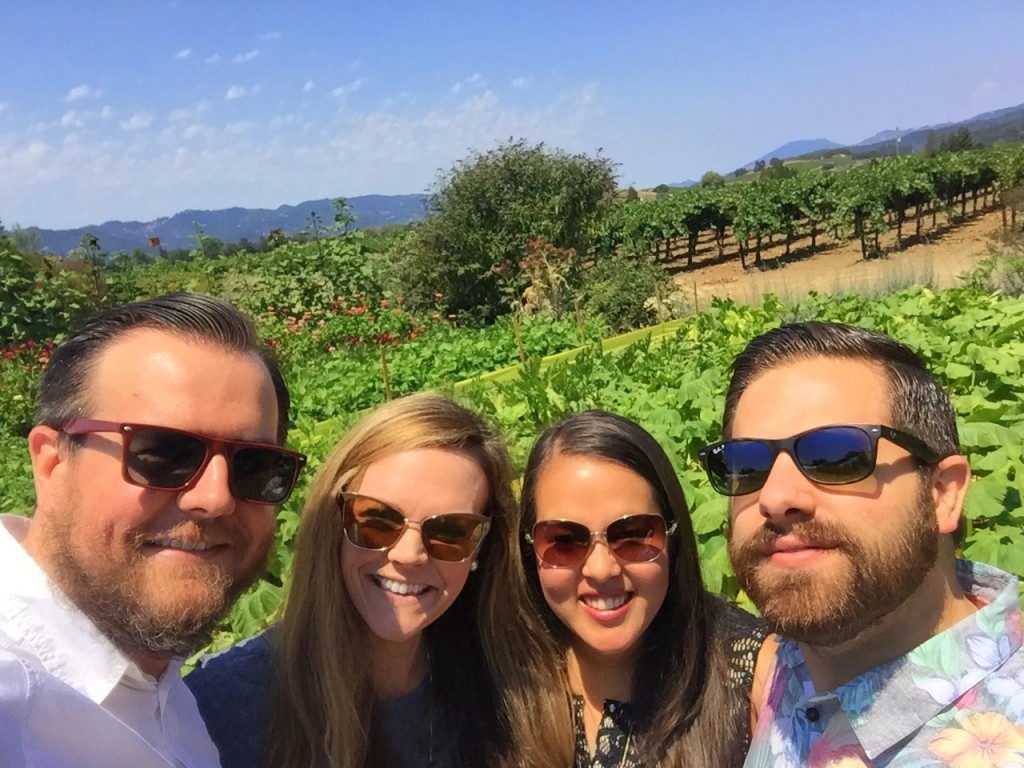 we tasted a total of four wines at frog’s leap, one white and three reds. it’s important to note that at every winery, each couple split a tasting. for S and i “split” meant, “i’ll have A sip of the red varietals and you can finish off the rest.” if the chardonnay or sauvignon blanc was to my liking, i may or may not have stolen more than just a sip, but for the most part i saved up my tolerance for champagne at the end of the day. 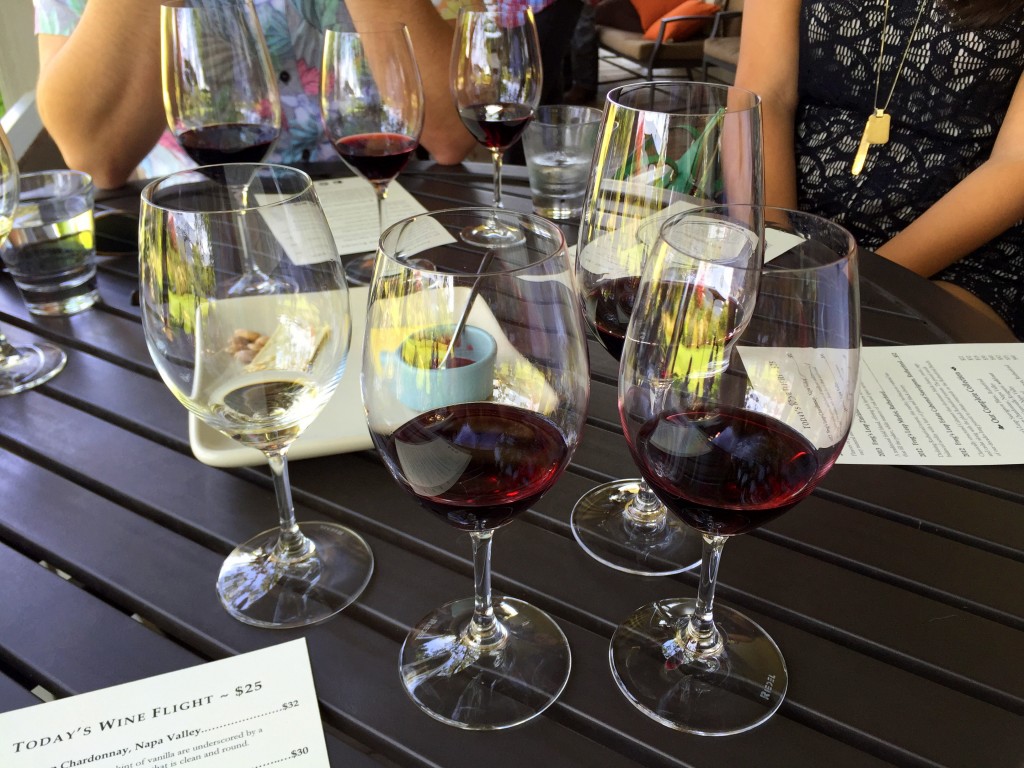 after frog’s leap, we stopped by oakville grocery co., a roadside specialty shop with a variety of options for a picnic lunch. after grabbing an assortment of victuals, we headed to the spot of our next tasting, cakebread cellars. 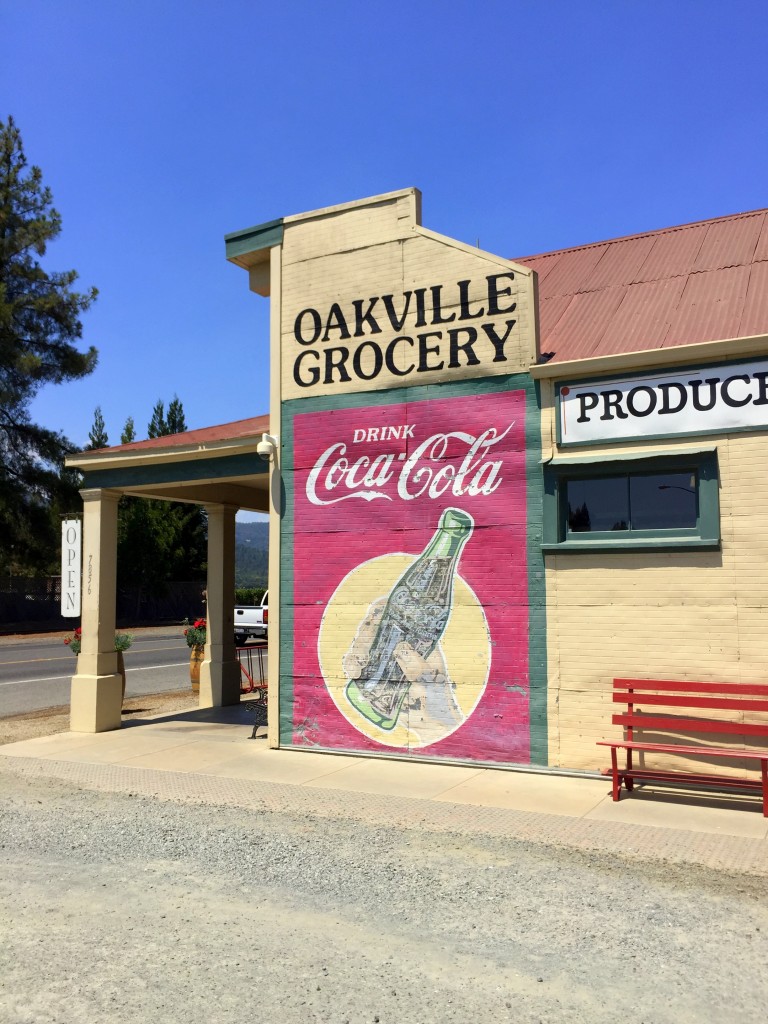 much to our chagrin we were offered neither cake nor bread upon arrival. apparently cakebread is the name of the family that started the winery back in 1973, but still, would it have killed them to put out a few pastries?

we finished our lunch while waiting for the next tasting tour to begin. once joined by a nice couple visiting from long island, new york, we were taken into the production room and actually sampled the five varietals alongside the 11,000 gallon barrels. while i appreciated the twist on a traditional tasting, i have to admit, i wasn’t a huge fan of their wines. but it was a fun experience nonetheless! 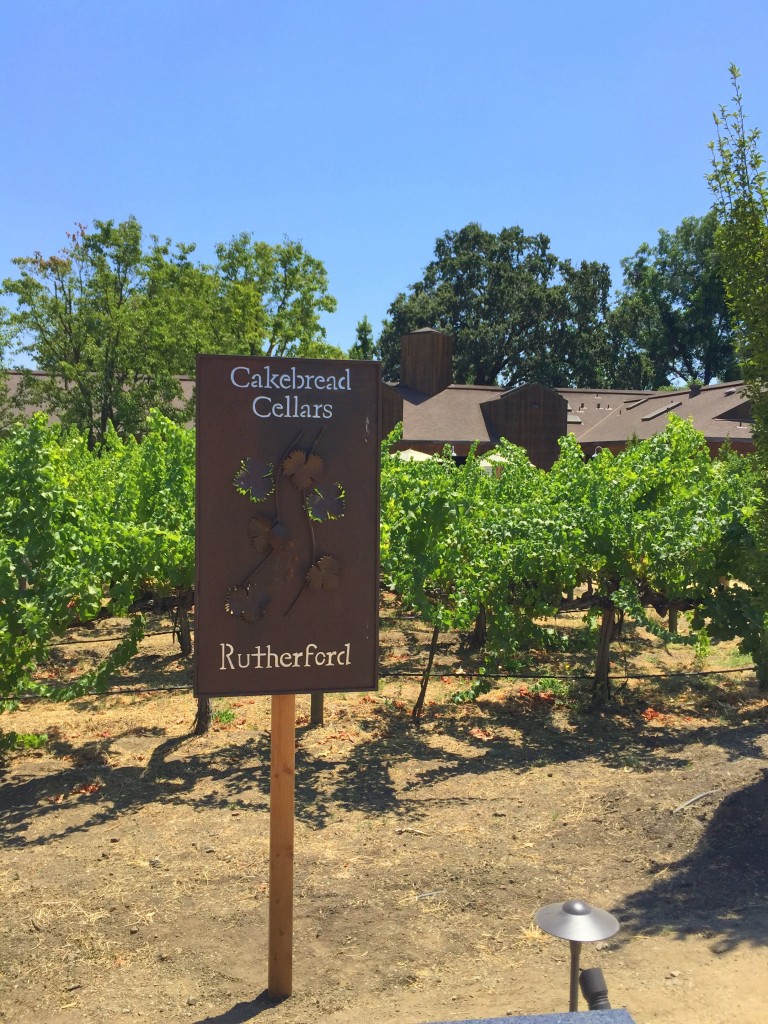 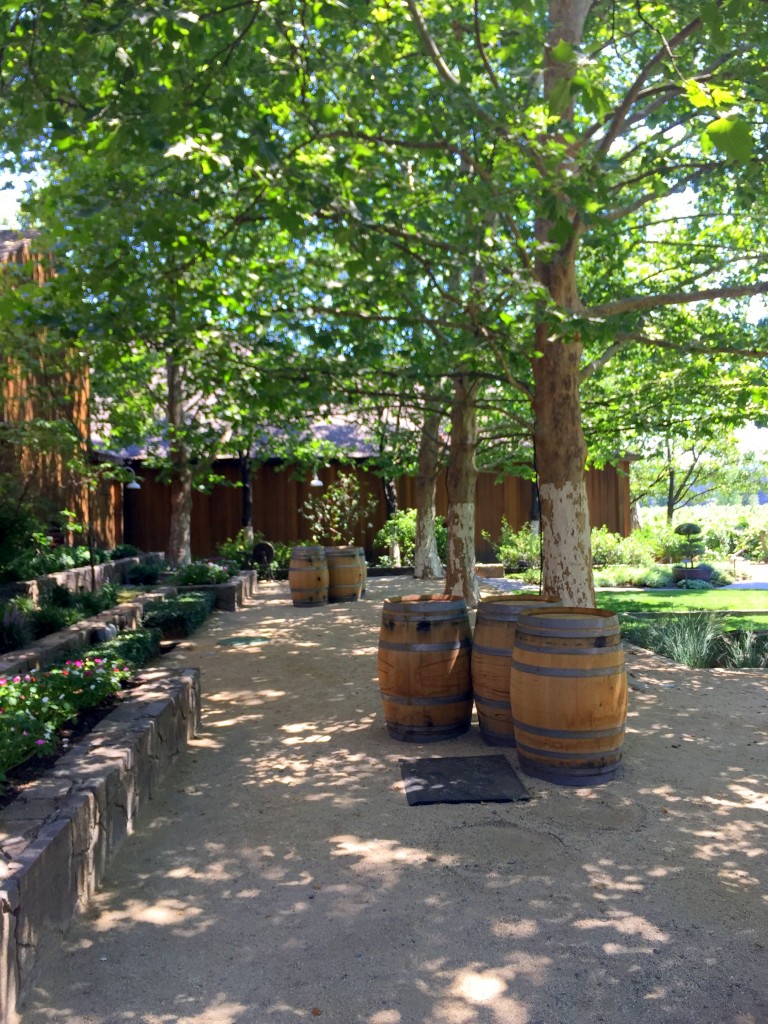 our third and final stop was to mumm napa for a little bubbly. while i’m learning to love non-bubbly wine, i sure do love its sparkling version. we followed the mumm-lined entryway into the tasting room and were seated on the covered back patio. there S and i split a tasting of their top three varietals while M & M sipped three different sparkling wines from their DVX collection. my favorite of the three was the cuvee m, in fact, i finished off the entire flute! it was the perfect combination of refreshing and sweet. and lucky for me, cuvee m is nationally distributed so the next time i’m craving a little bubbly, i can save a plane ticket and pick up a bottle at my local bevmo. 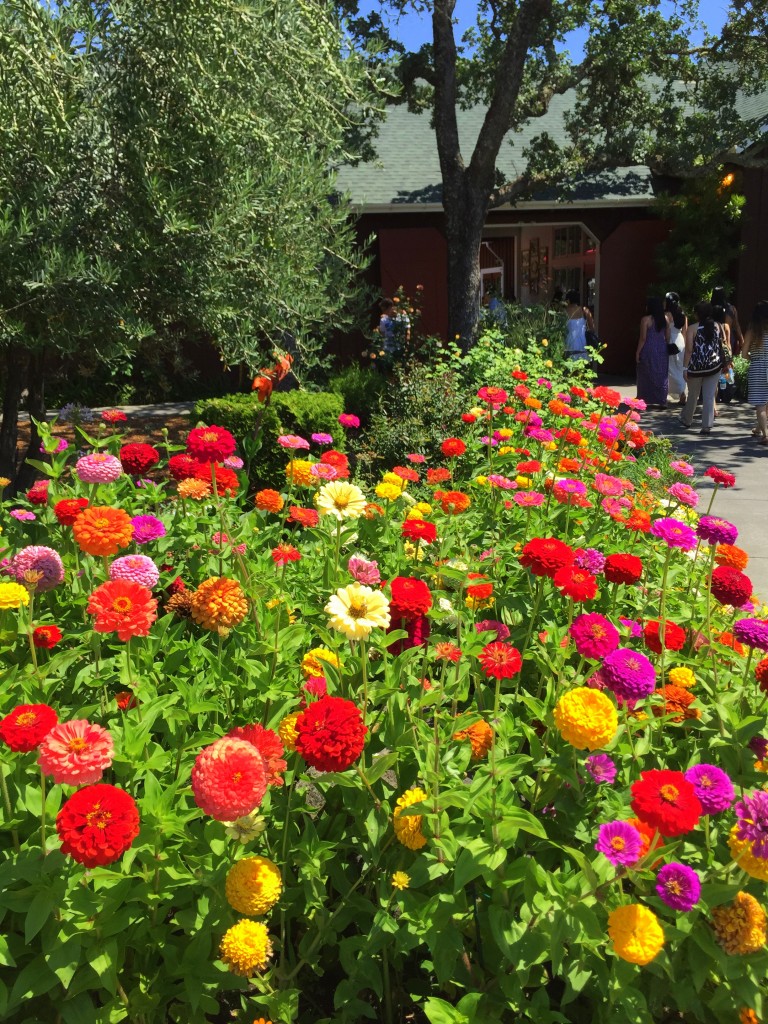 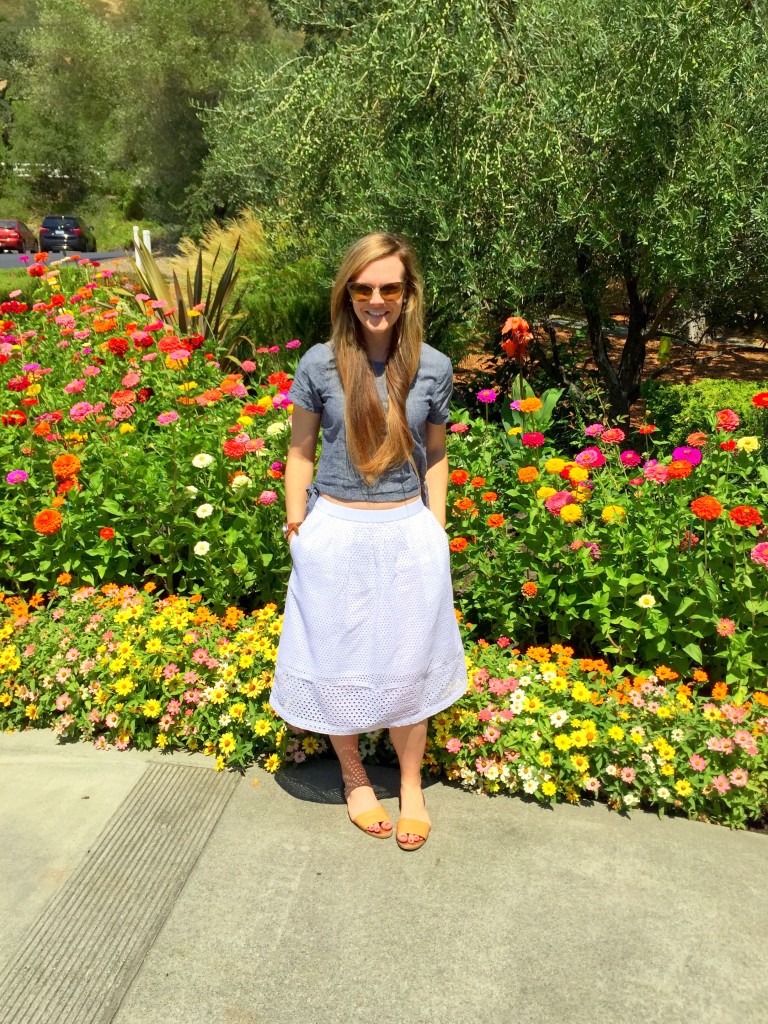 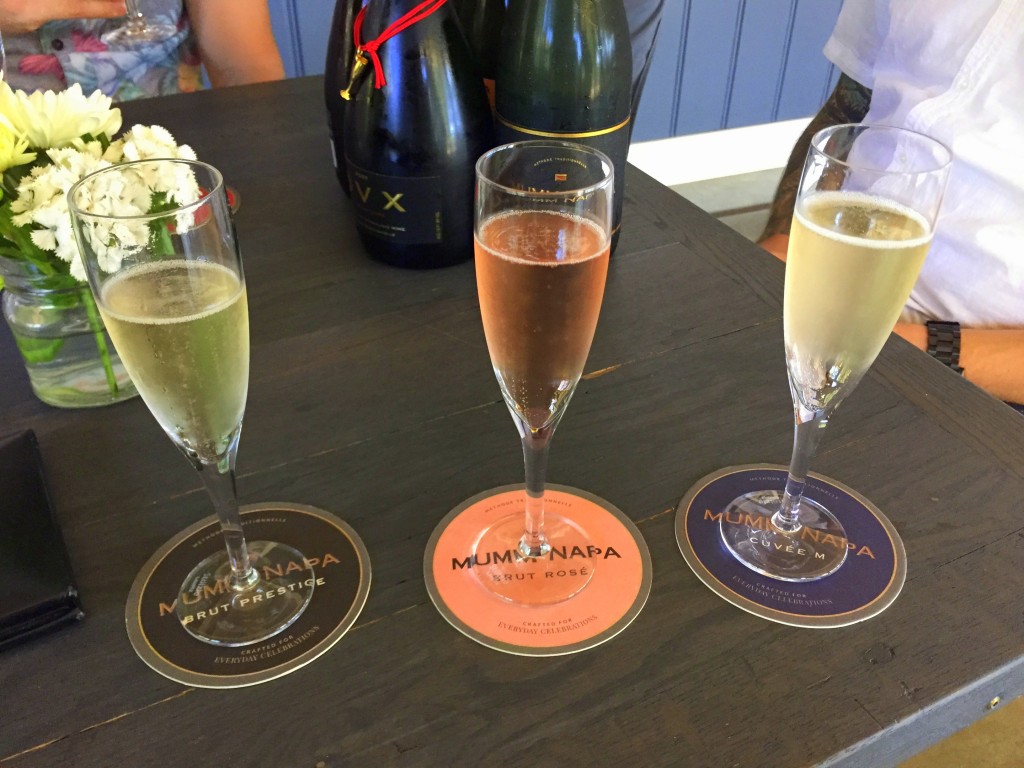 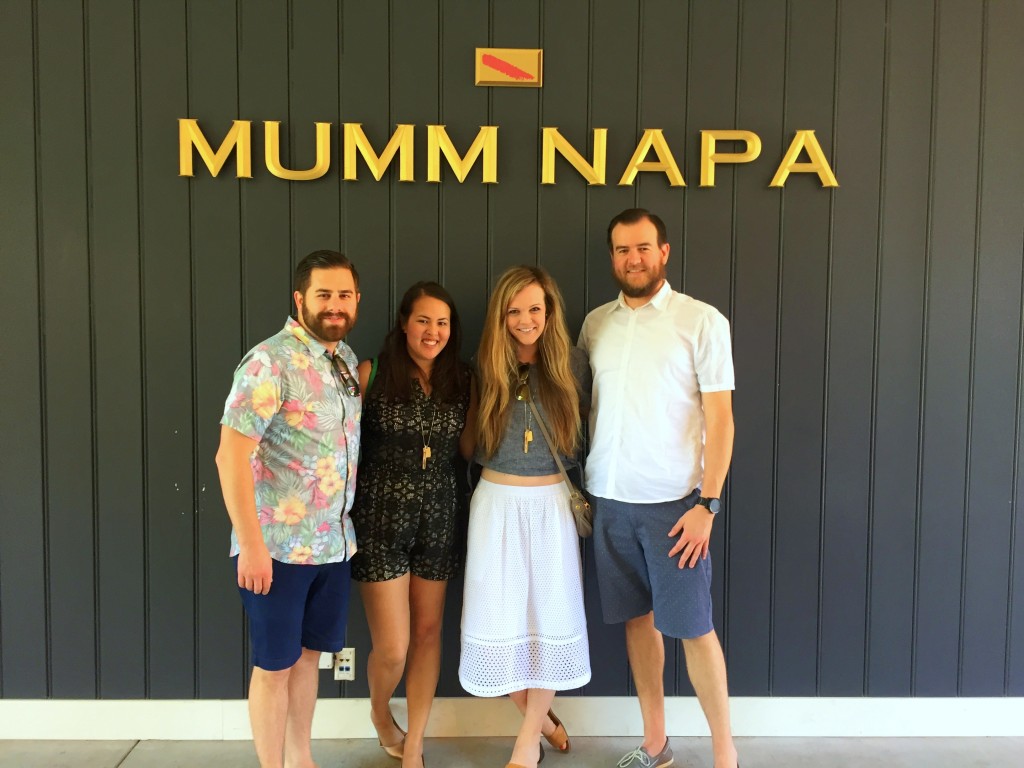 feeling pretty good at this point in time, we decided to cap off our day in napa with a visit to the napa premium outlets. despite my best effort, i was the only one that left empty-handed. though S did get a brand new navy suit from banana republic which inadvertently is a gift for me seeing as he’s quite handsome in it. we wound through the vineyard-lined roads toward home, stopping in the quaint city of sausalito for dinner. much like philz, avatar’s “marindian (marina + indian)” restaurant is always a top contender for a weekend meal whenever i’m in town. this visit was no different. starved from a full day of drinking, we began our meal with the restaurant’s signature samosas – gluten free for me, of course… 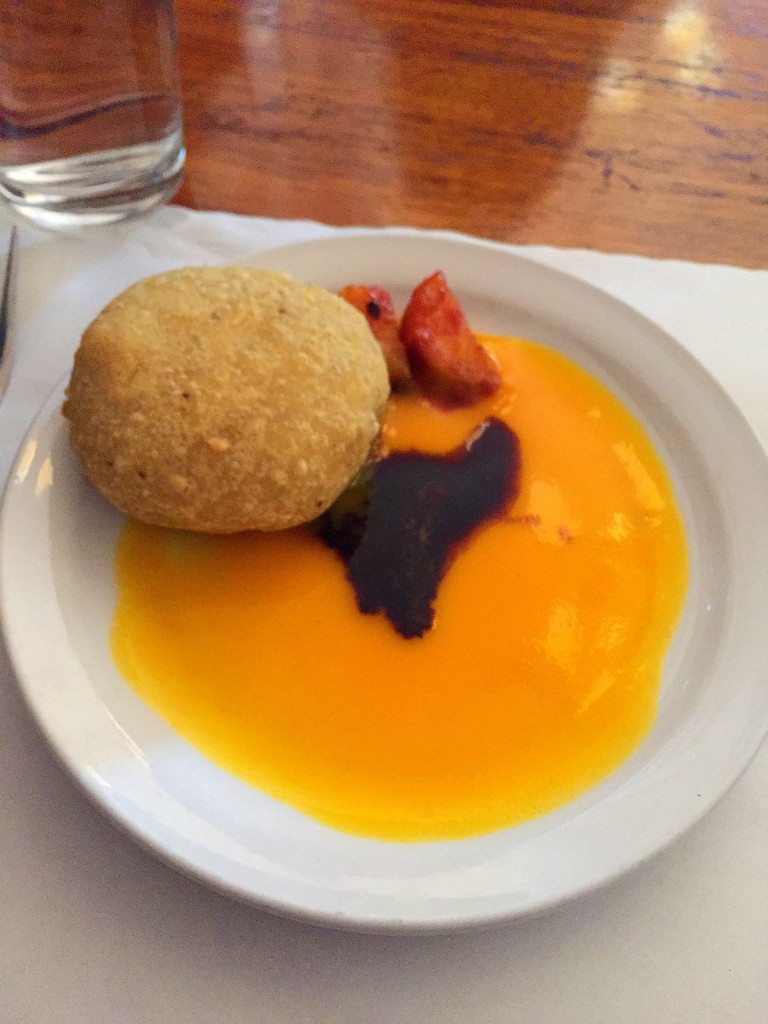 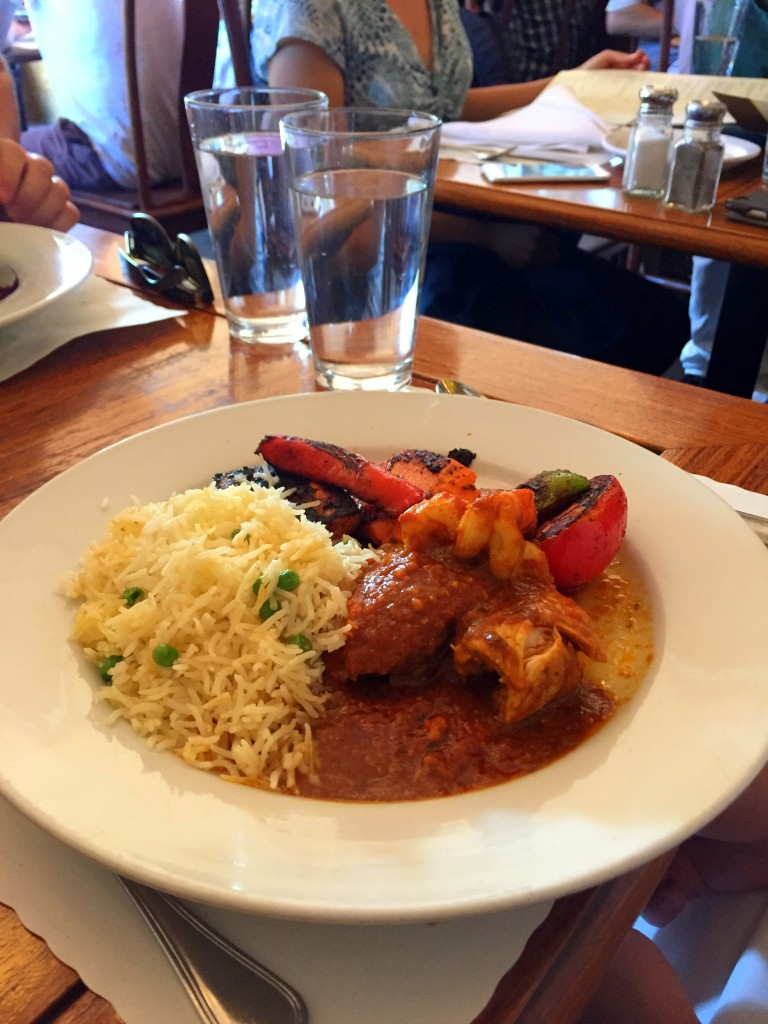 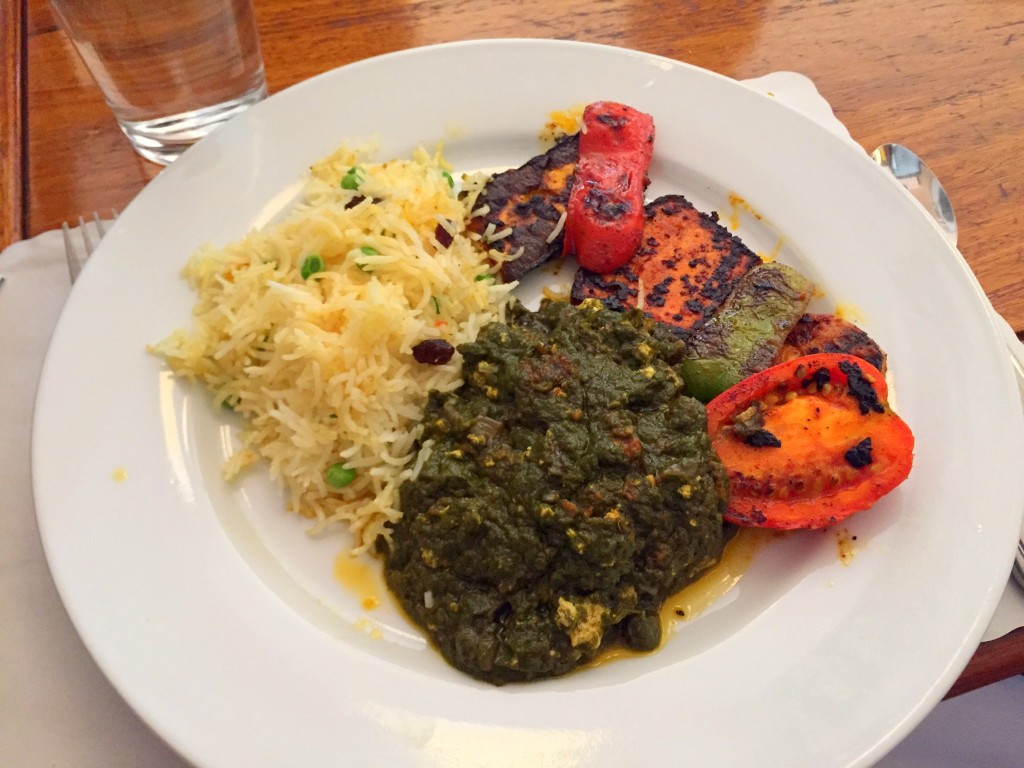 … followed by our entrees — M & S ordered the curry trio, the other M (i should have deemed them M1 & M2) opted for lamb, and me? i listed off my dietary restrictions to our server (and restaurant owner) and he came back with an unnamed dish that i’ll just call “delicious.” per usual, avatar’s did not disappoint.

craving a little something sweet on the way home, we stopped at susiecakes in the marina (lovingly referred to as “fratlandia” for the abundance of lululemon-clad sorority girls and popped polo-wearing fraternity bros) for a piece of their signature “vanilla celebration cake” (see also: funfetti) and a gluten-free peanut butter cookie for me. while M1 and i stayed in the idling car, M2 and S headed inside to retrieve the treats. i have to tell you, there is nothing like the sight of our bearded men carrying this dainty box of pastel-colored confections. us girls had a nice little giggle over that scene.

we returned to the house, changed into comfies, cued up american sniper, and finished off the evening watching bradley cooper’s portrayal of the late chris kyle while indulging in our saccharin treats.

for our final morning in the city, we did as the locals do -we brunched. M & M happen to live around the corner from one of the most sought-after brunch spots in the city –plow. so M1 walked down early to put our name in to evade the nearly hour-long wait. by the time we showered and got ready, we were next on the list! 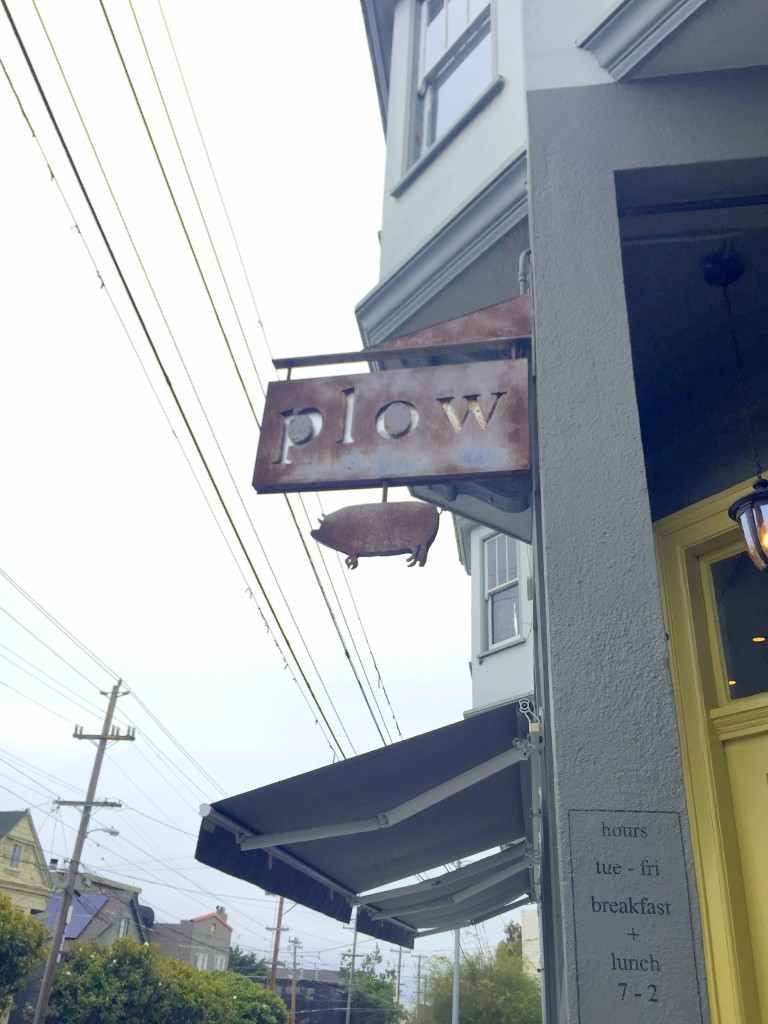 once inside the quaint eatery, we wasted no time in ordering. the smell of bacon, coffee, and pancakes fresh off the griddle was intoxicating! while M1 opted for a BLT with avocado, M2 ordered the eggs benedict. S chose the plow -a combination plate of eggs, bacon, crispy potatoes, and their signature lemon-ricotta pancakes, while i went classic shawna and ordered three sides -bacon, one gluten-free pancake, and scrambled eggs. 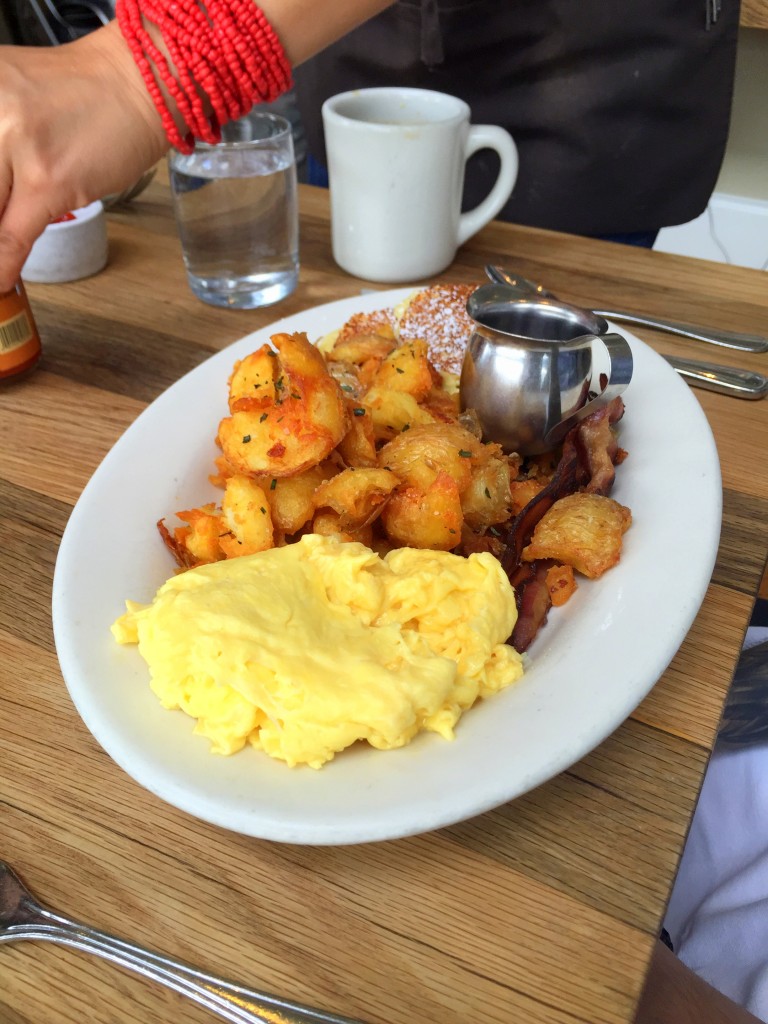 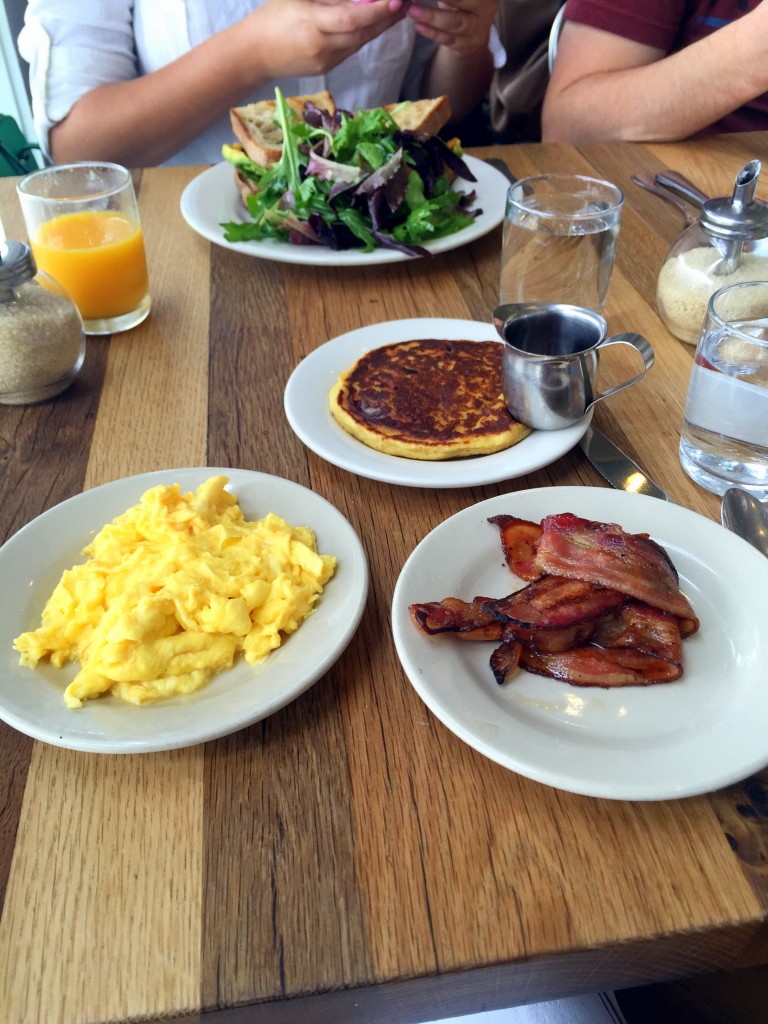 scrumptious breakfast aside, perhaps the highlight of our visit to plow was spotting shirin oskooi, a contestant on last season of survivor: worlds apart. while i certainly tout myself as a bit of a reality tv savant, i have to give credit where credit is due -M2 totally recognized her despite her being fairly incognito in a lululemon zip-up with pulled-back hair. one better, when i asked if he could take a photo of S and me from across the table, he angled my phone just right so as to capture this gem: 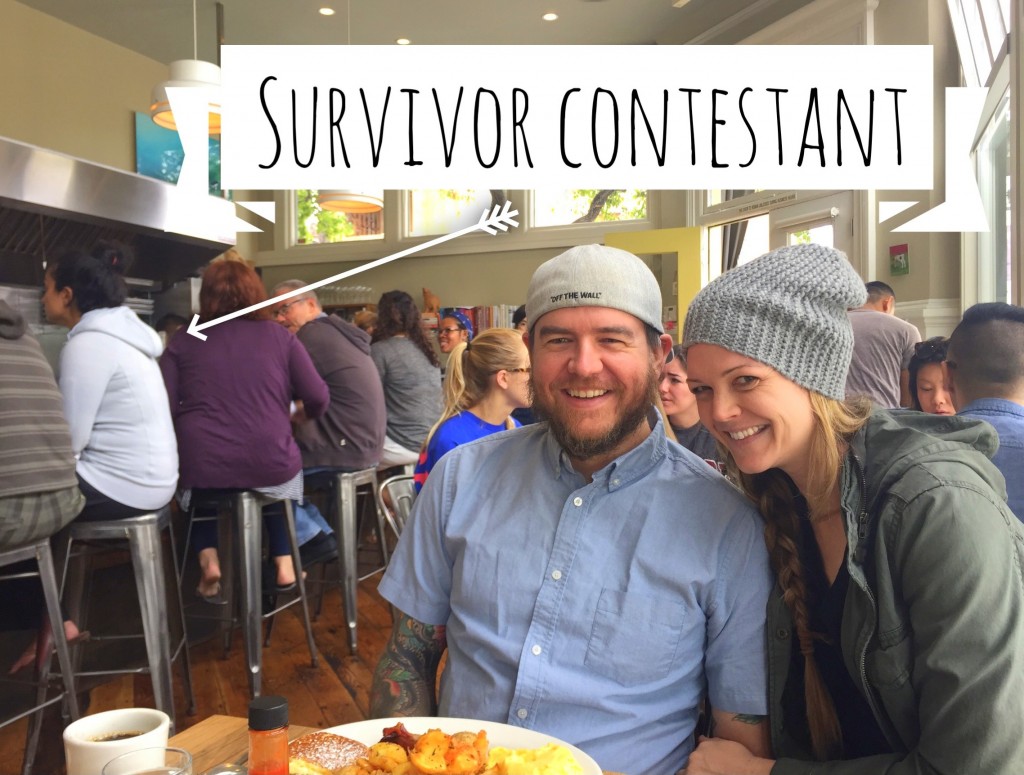 and this is why we are friends. after putting him up to the cause, M2 even stopped by shirin on our way out to offer his sincere congratulations for a successful season and well wishes for the upcoming season of survivor: second chance as she once again is vying for the one million dollar prize. we’ll see how she fares when the 31st installment of the show premieres next month.

after an exciting morning, we ventured up the hill to relax a bit and pack up before driving to the airport for our midday flight. we were once again delayed, but thankfully only about 45 minutes this time. we exchanged goodbyes curbside and strolled inside toward gate 26. nearly as quickly as we had arrived, it seemed, were we already bidding farewell to the beloved city by the bay.

a few magazines and a sprite zero later we were touching down at charles lindbergh, greeted by this iconic view that truly never gets old. 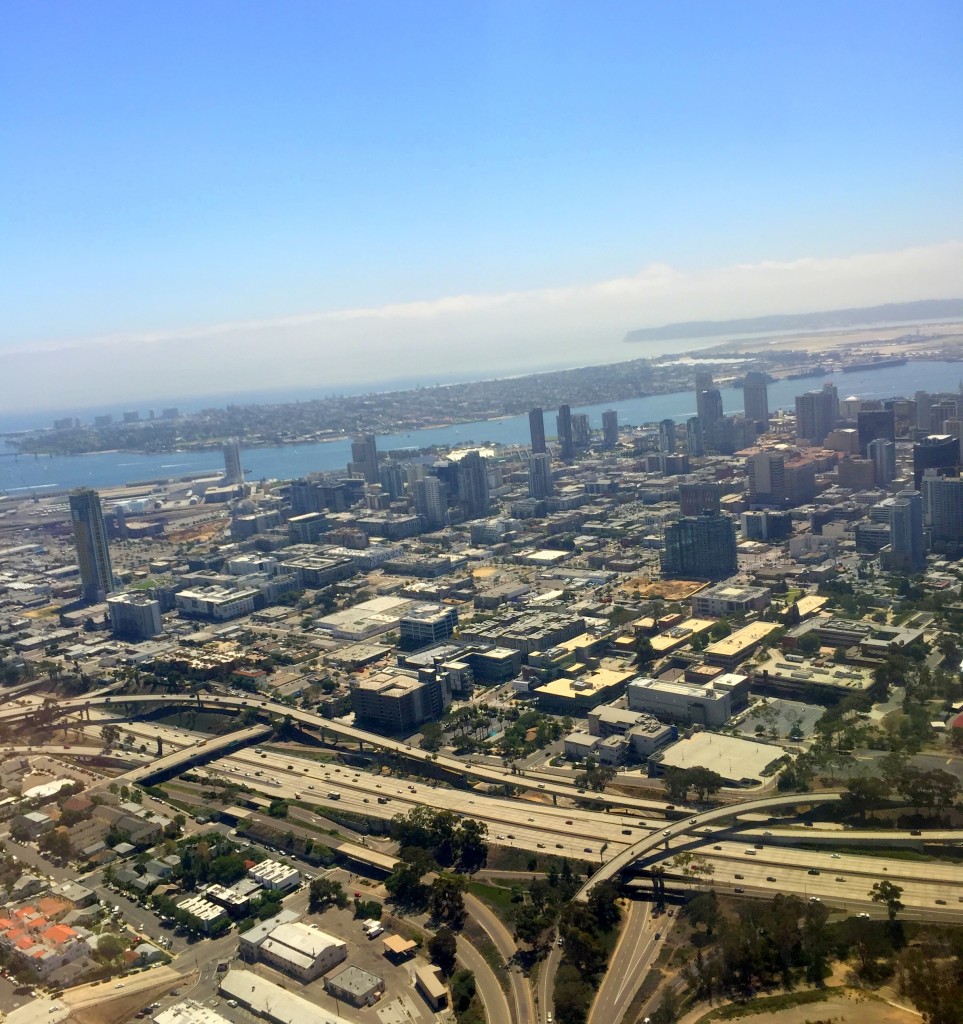 and just like that, our magical weekend getaway had come to a close and it was back to reality once again.

while every trip to san francisco over the past five years has certainly been memorable, this one in particular seems to standout for good reason. it was the first of what i hope to be an annual double-date weekend with M & M (and mayzie, too) and equally as important, another traveling adventure with my favorite partner-in-crime.

san francisco, we left you our hearts but just like the terminator, “[we’ll] be back.”