you want to know one of the fun things about having a blog? i’m sure you do, and i’ll tell you! it’s basically your online diary housing your past thoughts, feelings, events (and outfits), accessible for any time you care to take a walk down memory lane.

and seeing as it’s february, and well, you may or may not have realized that the holiday dedicated to all things red, pink and the elusive “L” bomb, is fast approaching. (t-minus 12 days. but who’s counting?), i thought it necessary to look back on valentine’s days past, or at least the two i documented on my blog -2011 and 2010. and while they may not have been the most “that would make a great plot for the next romcom starring kate hudson”-worthy, they are uniquely my own and special nonetheless.

alright i’ll spare you my thoughts on valentine’s day. it’s in the past and i made it out without the least bit of “woe is me i don’t have a valentine/i’m going to die alone with 47 cats” self-pity that one in my current single-state might have [he’s just stuck in traffic, obvi, but boy do i wish sometimes that the road would just clear already!] fallen victim to. valentine’s day -0, shawna -1.

anyway, last week at trader joes (i swear i do other things with my life besides shopping at tj’s), the register clerk (don) asked me what my plans were for the big day. long story short, i told him i wasn’t really into valentine’s day as i had never really had a valentine, blah blah blah. he then proceeded to sort of argue with me. what? yeah, it was kind of strange, but in his defense, i think he was trying to insinuate that this concept was outrageous. i mean, obvi i’m quality valentine material (tooting my own horn, here, toot toot). i suppose i left the store feeling flattered?

fast forward to last night, good ol’ don graciously rang up my $100+ (yikes) cart full of goods and right away referred back to our conversation regarding v-day the week prior.

don: “weren’t you the one who told me she had never had a valentine?”

me: “yes, don, why don’t you say it a bit louder, i don’t think they heard you in the stock room” (ok, so i didn’t really say that, i just sheepishly nodded yes.)

don: [reaches for a small bouquet of flowers at the end of the register -great product placement by the way- and adds it to my cart] “well, now you can’t say that no one ever gave you flowers for valentine’s day.” 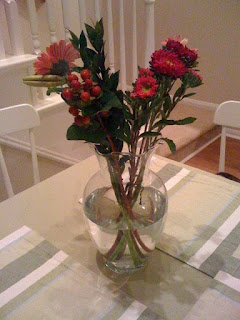 me: [shocked/flattered] “or on the wednesday after valentine’s day…” [yes, instead of gushing and stating how appreciative i was of his kindness, i decided to take a sarcastic jab…whoopsies. again, maybe why i’m single]. not but really, i did express my sincere gratitude.

that’s really all i have to share at this time. don is a nice fellow. from my interactions with him i have learned that he has been married before, (my guess on his age is around 37, give or take), he has a degree in culinary arts and that while he eats a lot of vegetables, he could never be a vegetarian (last night we discussed my recent conversion to complete vegetarianism, as evidenced by my overabundance of alternative protein source-purchases). i am not in the least bit sexually attracted to him, but that’s ok. he’s just another reason why i heart trader joes.

also, i saw andy and inquired about baby henry. baby henry is already five months old! somehow after learning this, i, too felt like a proud mom, [my little henry is getting so big!]. is that weird?

right, so who’s andy? andy is a former encinitas trader joe’s employee who has since moved into a managerial position at the point loma location (wah wah). one day (i still can’t remember how exactly), we simply started chatting. and in the midst of our conversation, he did what any proud new papa would do, he pulled out pictures of his son, henry. and since that day while engaged in the middle of the frozen food aisle (right in front of the frozen desserts in fact), we always made it a point to say hello and catch up on life whenever i found myself shopping and he, stocking the shelves.

re-reading this story makes my heart swell. i think we underestimate the power of a “just because” flower bouquet. sure, the sender wasn’t ryan gosling or even someone i’m interested in romantically, but that’s the beauty of receiving an arrangement of blooms, whether they be from a girlfriend, a client, a colleague, a parent or that special someone, they are awesome all the same. their presence on your desk or in your room or on your kitchen table (as those pictured above were for about a week or so until they unfortunately wilted and died) only serves as a reminder that someone somewhere thinks you’re great. and well, i don’t think that ever gets old. so yes, i didn’t technically have a valentine on 2/14/10, but i did have a really sweet gathering of gerbers (and other unidentifiable flowers) to remind me that i’m really loved. even if that love stems from the employees at trader joe’s.

i have my whole life to have a really memorable valentine’s day.

in the meantime, this is how my evening played out on one of the most overrated  romantic days of the year.

a visit with joe.
a date with watson.
an eight-oh-seven-o’clock bedtime.

maybe it’s that almost nine-hours of rest (holla!) talking or the fact that i have managed to concoct the perfect high ponytail today (good hair days are directly correlated to your happiness, it’s scientific fact, obvi), but i can’t help but feel a little spring in my step on this cloudy tuesday morning.

or perhaps it’s the fact that i know that i don’t need february 14th to celebrate love. there are 364 more days this year where that four-letter word can reign supreme.

so here’s to february 15th, 16th, 17th, all the way to december 31st. besides, red and pink aren’t really my colors, i’m an autumn and they clash with my skin tone.

back story on this less enthused v-day post. the writing was fast revealing itself on the proverbial wall. the mister and i were on a slow steady decline after a solid two months of bliss (if you don’t know about “the mister,” please refer to posts from about december 2010 to well, february 2011) and well, i suppose it was my own fault for getting a little over-zealous and assuming our 60-day courtship might actually warrant my very first real life valentine’s day date. instead, i got a half-hearted text and well, you can read the rest above. side note: apparently i like to commemorate the unofficial day of love with a visit to trader joe’s? i mean, it seems only fitting that i would ring in the holiday with my one true first love. i also totally remember being super excited about the whole “ibm’s watson robot is going to compete against the winningest (yep, it’s totally a word) contestants on jeopardy” concept. i bought into the hype. and to tell you the truth, it was a little lackluster when all was said and done.

and just like my 2010 recount, reviewing last year’s rendition of valentine’s day is a pleasant reminder of how i refuse to let myself get all sobby, whiney and ben & jerry’s consuming-y when it comes to this time of the year. and while i’ve rethought my feelings of red and pink -hello my red pants are basically one of my favorite items in my wardrobe as of late -i haven’t changed my firm belief that a) i really do have the rest of my life to have the “omg it’s the best valentine’s day EVER” and b) why reserve roses, chocolate and conversations hearts (my personal favorite) for february 14th? i say may 18th or november 5th are equally as deserving days for a little celebration of the four-letter word.

now only if i can have hallmark buy off on this…

so in the meantime, true, i’m not sure what my tuesday evening in two weeks is going to look like (that whole seeing into the future thing is best left up to God, you know), but i have a sneaking suspicion i might find my fresh-from-pure-barre-spandexed-self hanging out in the condiments aisle at trader joe’s secretly hoping for another gratuitous bouquet of flowers compliments of employee don and/or stocking up on ketchup. because nothing says “happy valentine’s day to me” than a bottle or three of the tj’s version of my beloved tomatoey spread (ketchup isn’t technically a spread but it sounded better than using the word condiment again).