so i’m going camping this weekend in honor of a certain special someone’s birthday.

if you’re like many i’ve uttered the above sentence to in the past week or so, you’re probably questioning the legitimacy of said claim. in other words, the first thought that may or may not have popped into your sweet little head upon becoming privy to my pending adventures was “wait, YOU camp?”

and while the first time i may have been offended that someone would mistaken me for a non-nature-er, upon further reflection, i have to admit…i get it. my over-sized flowers and wardrobe full of polka dots don’t exactly scream “i’m totally down with not showering and sleeping in a tent” do they?

but that’s where i’d like to try and eradicate your hasty deduction of my extra curricular activity repertoire. i’ll have you know that as a former girl scout, i have had my share of camping experiences.

sure, some of these so-called “experiences” have included cabins over tents and free-standing bathroom facilities over holes in the ground, but that by no means discounts them as viable occasions when mother nature and i had quality time to work on our bond.

growing up, my parents did a superb (<–i feel as though this word is far underutilized) job at exposing me and my siblings to the great outdoors. from an early age, we were taught the importance of experiencing the world around us; that family vacations produced far better and lasting memories than anything purchased at toys ‘r us (or for me, the sanrio store). and therefore, every break from school we had was spent road-tripping up and down the coast of california, en route to the likes of julian, mammoth, sequoia, and yosemite. countless are the photos of us laced up in hiking shoes, our hair up in pony tails (yep, dad, too, just kidding), with a walking stick as our guide. rocks were meant to be climbed, trails blazed, waterfalls admired and streams splashed in. i don’t think i’ll ever look back on my childhood without visions of a packed teal ford explorer, the way the meadows look at dusk in the yosemite valley, and most definitely s’mores. lots and lots of s’mores (did i mention i was slightly chunky as a kid?).

but youth was a long time ago, wasn’t it? and as my father pulled my sleeping bag down from my garage rafters recently, i couldn’t help but to take a momentary pause as i tried to recall the last time that track-suit material body bag (that sounds terribly morbid) was used for anything more than a cushion to transport furniture from point a to b.

it has been quite some time since i have “camped.” it has been an even longer time since i’ve actually camped. and for that reason, among others, i completely understand the basis for my friends’ inquisitory remarks when i mention the happenings of the upcoming weekend. again, i get it.

but i’d like to think that despite the fact that i don’t have a lifetime membership to REI and my hiking attire looks like the fall catalog from lululemon, that come this evening, i will be fully embracing my no-make-up-one-with-nature-please-bring-scented-body-spray-because-there’s-no-running-water-for-showering-a-little-dirt-never-hurt-going ways.

so wish me good luck; that i make it through the next 48 hours unscathed, un-sunburnt (highly doubtful), un-dehydrated, and un-rattlesnake bitten. that i may even earn myself a merit badge or two (if you’re even allowed to earn them after retiring  your girl scout sash) -i may not know how to start a fire but i roast a mean marshmallow…

but most importantly, pray simply that that i soak up every moment of being out in God’s majestic creation while in the company of a few fabulous humans. 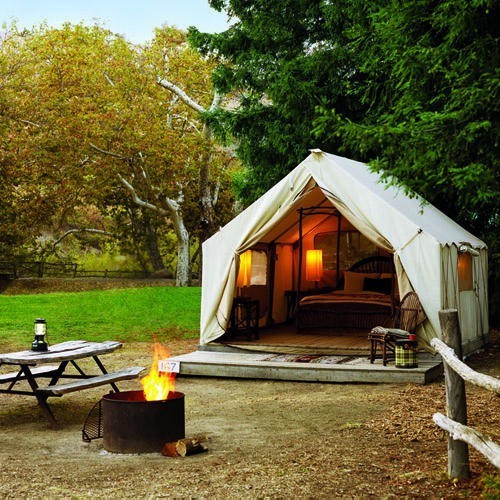