it was a friday. a rainy one at that. and while fridays are often exciting in their own right (if only for the fact that they are the corridor to the weekend), this one in particular was more noteworthy than most.

we had dated briefly in the winter of 2010. and despite its brevity, the relationship, or well, almostlationship (we never really got around to the titles) certainly left its mark (in a good way). because of him, i learned to love sushi and solidified my abhorrence for running (my knees see that as a plus), i learned to cherish the little gestures and that sometimes spontaneity is not terrifying, but rather quite wonderful. i learned to be grateful for fallen relationships and even managed to take the concept and turn it into a book. like i said, he made his mark.

i remember being disappointed that tuesday evening when he finally admitted to me after almost three months of dating that he still didn’t want more than a casual relationship. this of course only after i had allowed for my heart to get good and attached (it tends to do that fairly quickly). but then i remember assuring myself that if he wasn’t ready for all that i had to give within the confines of a relationship, God would certainly bring along someone who was. so i told him a polite thanksbutnothanks and spent the next two years living with a new attitude -that i would never settle for being someone’s good time, but would rather expect and demand only the best. and i stayed pretty true to that for a while, at least. and after that last text message was sent sealing our fate, i never thought about him again (that’s a lie, i totally thought about him for like a week afterward and obviously each time i had to recount why it was that i suddenly had all of this free time on my hands, but after that, i swear, he was far from my mind).

so you’d imagine my surprise when on that friday afternoon the receptionist at work approached my office door with a bouquet of roses. 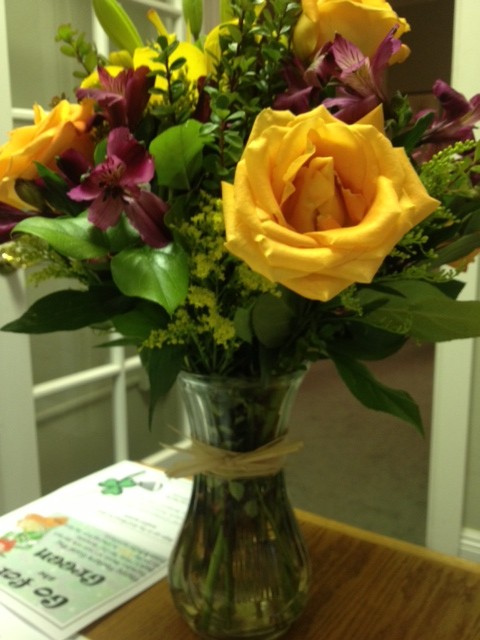 i’ve received flowers at work before -on my birthday and from my father. but seeing as my birthday is in june, my heart began to race as she set the vase down on the edge of my desk, who could have sent such an arrangement?

and then i peeled the card from its plastic holder and began to read its heartfelt contents,

“shawna, i hope these brighten up this rainy day, just as walking with you over two years ago brightened up mine. i would love to get to know you all over again. happy friday. [dedacted, phone number] call me maybe.”

holy gestures, batman. for someone who is never at a loss for words, in that moment, i was speechless. i’ve had some pretty great declarations of love (read: prom invitations), but i’m pretty sure a “can i get you back?” bouquet ranks amongst the best.

i struggled for words to quantify my sheer and utter dumbfoundness but nothing seemed adequate. this doesn’t happen to me, i don’t live in a rom com. but when the shock finally subsided, i still found myself uncertain of my next move. so i did what any girl would do, i texted three of my closest girlfriends and pleaded for their advice. and after a few dozen text exchanges filled with exclamation points and “OMG’s”, the decision was unanimous -give the kid a chance! so i texted him as i left work, disguising my response in the lyrics of carly rae jepsen’s top hit (thanks E). i told him that i would call him maybe and then i took out the maybe part and actually called him. we didn’t end up exchanging calls on that particular evening, but through a series of text messages, we later set up a coffee date for sunday afternoon.

and i’m not gonna lie, despite the grand gesture and the flattery that ensued, i kind of knew that my feelings for my former flame had died along with our almostlationship two years prior. but you know, people tend to change, and sometimes feelings for those people change, too, so i knew i couldn’t write off the possibility of a rekindling if i didn’t at least give him the opportunity to reignite the flame.

we decided to meet at a local coffee shop and while i would be lying if i said that i wasn’t nervous to see how it all played out, in the instant we were reunited, i was sure that the decision i had made to walk away years ago had been the right one. but i let the date play out, if only to find answers for the reason for his sudden change of heart. we chatted about life -each filling in the blanks of the last 24 months, and i did my best to convey all of the fabulousness i had been busy with since his departure. somehow the whole date had turned into sweet vindication as it was more than apparent that he had set out to recapture the one that got away.

the date ended awkwardly as you may have imagined it would. he walked me to my car and i thanked him for his thoughtfulness and for the coffee, too. but when he proposed the possibility of a future date, i knew there would be no such thing. so i did my best to dodge the issue entirely and blamed my busy schedule as the culprit for my unavailability.

and aside from one last effort he threw out the following weekend, i haven’t heard from him since.

now the reason i recount this story isn’t to tell you what a terrible person i am. because knowing the aforementioned details may have you questioning the temperature of my heart (it’s obviously so cold that it won’t even give a guy a second chance when he’s more than proved himself). it’s not even to brag about how men are throwing themselves at me these days and i don’t even seem to care (okay, so maybe it’s a little about that and also, i just pluralized that, it’s not “men” but rather just one man). it’s about the fact that sometimes things work out how they’re supposed to the first time around. and maybe it takes instances like this to remind us of that.

i think it’s only natural that i’ve often fantasized about an ex (can you call him your ex if you were never in a real relationship? in this instance, i say yes) seeing the error of his ways and coming back to regain my heart. or maybe that’s just because i’ve watched too many katherine heigl movies and that has skewed my expectations. but despite how i’ve seen it portrayed by hollywood, it doesn’t quite always play out like that in real life. or at least it didn’t in this particular situation. it’s not that i don’t believe in giving second chances, as history would dictate, i enjoy giving third and fourth chances as well. but since mister call me maybe left the first time, i went on to have a couple of great relationships with men of which i shared a much deeper bond. so only in having this fresh perspective could i really come to realize that our original courtship wasn’t as glorified as i had fancied it to be.

sure, maybe i was premature in my conclusions that our round two at love was dead on arrival. but if i’ve learned anything in the last ten years (oh yes, i’ve been learning the same lesson for some time now), it’s that it’s never okay to toy with someone’s heart. just as it is never okay for them to toy with yours. we like to think that it’s only the guys that do it to us gals (and they do, they certainly do), but speaking from firsthand experience, the female population isn’t so guilt-free. and while it was tempting to milk the sudden outpouring of attention for all that it was worth, i knew that a) i’d like to think i’m better than that and b) if the situation were reversed, i would only hope i was shown the same respect.

joni mitchell (and later the counting crows) once sang, “don’t it always seem to go, that you don’t know what you’ve got ’til it’s gone (they paved paradise and put up a parking lot, shoo bop bop bop).” and i get it, sometimes it takes losing something or someone in order to gain a little perspective. but what’s wrong with wanting someone to realize what they have when they actually have it?

which leads me back to my point about things working out how they are supposed to the first time around. that though in that moment, we think our life is ending (that’s a bit severe, but you know what i mean), a week, a month, a year later we realize that it was simply a stepping stone on our journey (i’ve been watching too much of the bachelor) toward finding our final plus one. and that’s the funny thing about timing -it’s a fickle fickle little thing. time was what he needed to realize what he wanted, but that same passage of time was what i used to determine what i didn’t.

but that doesn’t mean that i’m not grateful for what we had as well as his most recent attempts at recreating it. everyone should know what it feels like to be pursued in such a brave way. all it means is that this particular story -our story ends here. but boy is it a pretty good story. if anything for the fact that it involves a rainy afternoon and a lyric from a carly rae jepsen song.